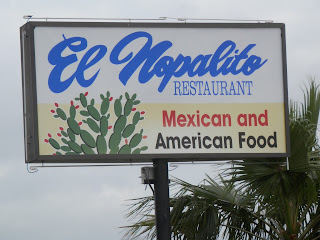 Breakfast in Texas takes an exciting turn from the same old country breakfasts (which I love as well).  Here in Texas, I have discovered Mexican breakfasts, rich with salsa, peppers, onions, and tomatoes.  My favorite Mexican breakfasts come from El Nopalito of New Braunfels.  The kitchen service is so fast that the food comes out within minutes of my ordering.  It seems like the waiters are psychic, knowing what their customers want before they come through the door.

This Mexican restaurant is located on Loop-337 just a few miles west of I-35.  Take Exit 189 off the interstate.  If coming from US-281, take TX-46 east to the outskirts of New Braunfels and turn north on Loop-337.  I usually don't do restaurants with multiple locations, but this one has only two other and has the mom-n-pop style to their food and service. 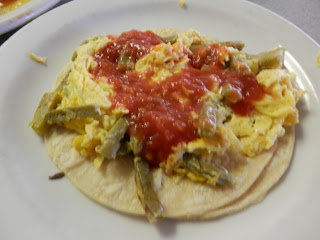 Nopalito means catus pod.  Above is a cactus taco with the restaurants great hot sauce on top.  I'm a meat and egg taco person, but this deviation is nothing short of fantastic!  And get it on a corn tortilla.  Normally, I want flour tortillas, but the Nopalito and Egg taco calls for corn tortilla.  If you look closely at the pic, you'll see that they gave me two tortillas.  This is absolutely one of the best tortillas that ever found its way to my mouth.  That and an order of refried beans and cheese cost around three bucks with tax.  Look toward the bottom of this blog for the sizable portion of beans they gave me. 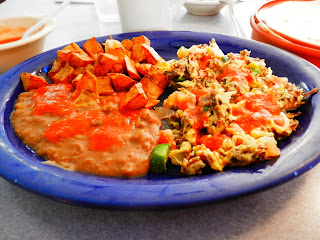 Mancachada is an egg scramble with tomatoes, jalapenos, onions, and strips of dried beef.  Great combination of flavors.  And their refried beans are great.  They have this rich red salsa that I put on everything.  When I have company, I order a basket of chips to eat the beans with.  All Mexican breakfast plates come with two tortillas, flour or corn. 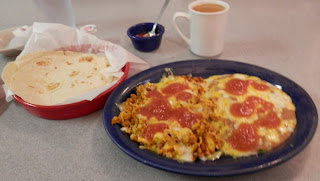 Choriso is a Mexican sausage which is quite greasy raw.  The good restaurants cook the grease out before adding it to the eggs, as does Nopalitos.  After my bi-annual fasting blood test, I ordered this dish in another restaurant where the waitress there asked if I wanted cheese.  This was the magic window between the blood being drawn and my doctor telling me what I couldn't eat.  So I said yes!  And have been having that way ever since, cheese on both the choriso-n-eggs and the refried beans.  That red stuff on everything is the salsa. 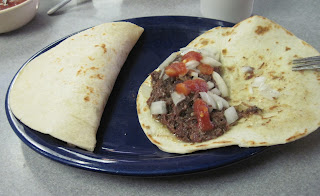 One of the first Mexican dishes I had after moving to Texas was the barbacoa tacos.  Barbacoa is the cheek meat of a cow cooked ever so slowly.  Years later, a restaurant owner taught me to have onions and cilantro with my barbacoa.  This is rib sticking food.  Two barbacoa tacos for breakfast and I'm good til evening. 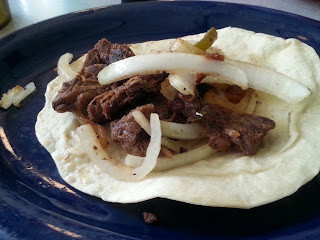 Nopalito serves all types of breakfast tacos including the fajita taco on either flour or corn tortilla.  Some other tacos are bean and cheese, bacon and egg, and sausage and egg. 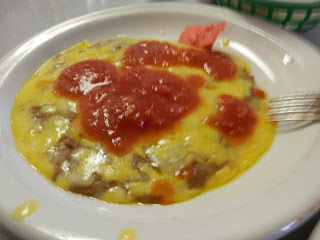 Underneath all of the cheese and salsa are refried beans.  They loaded up a whole dinner plate with this stuff.  And it's great with chips.  See the red chip at the top of the photo.  The red ones have no calories.  Believe that!

Nopalito serves country breakfasts as well.  But heads-up to non-Texans about the scrambled eggs in Mexican restaurants.  Eggs are lightly beaten into what I call a Tex-Mex scramble.  They are not thoroughly beaten as found in a French scramble.  I like both.  And that's the way it is in all Mexican restaurants that I frequent. 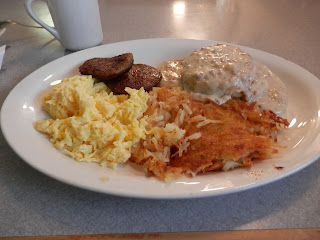 Nopalito makes a rich sausage cream gravy with which they smother a biscuit.  This plate has Tex-Mex scrambled eggs and hash browns.  Look how crisp the hash browns are. 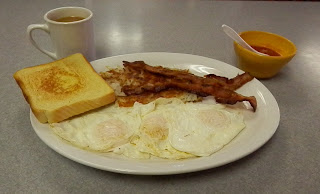