Flashback Grill of Springfield OR 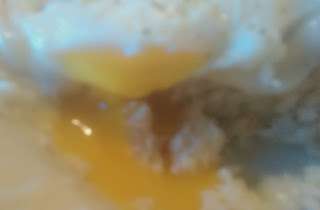 Look at that rich yolk oozing out of the biscuit breakfast dish.  Biscuits, sausage, eggs, cream gravy ... it doesn't get much better than that if you're the Breakfast Bro.  And it comes from the Flashback Grill of Springfield, Oregon. 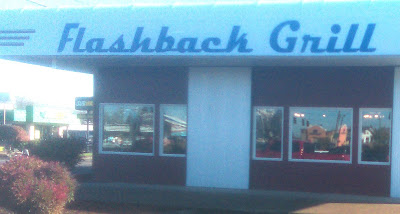 The Flashback Grill is located on Main Street on the outskirts of Springfield.  Just travel from Eugene into Springfield down it's Main Street until you have almost left town.  It's on the right and is the newest mom-n-pop breakfast place on Main.  I will be back.  Go to the Grill's Facebook page  for more information. 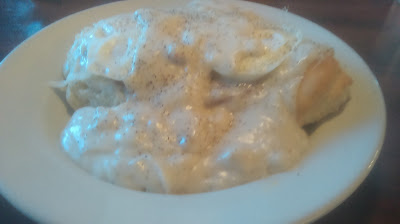 This is a real treat for the Breakfast Bro!  Open faced biscuits with sausage paddies and eggs my way, all topped with cream gravy, now that's good. 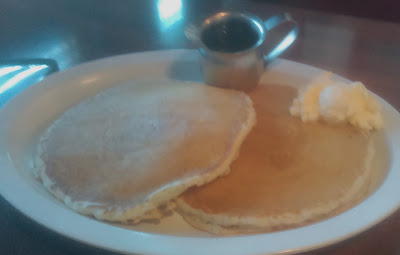 Their traditional egg plates come with eggs the way you want them, a choice of meats and a choice between pancakes, biscuits-n-gravy, and toast with potatoes (hash browns or country potatoes). 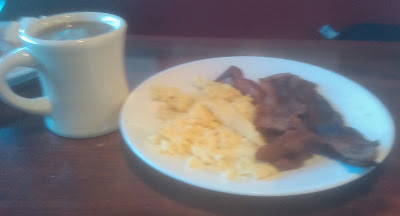 This dish comes with ham, bacon (see above), sausage paddy, or German sausage (see below). 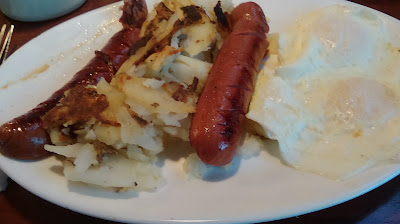 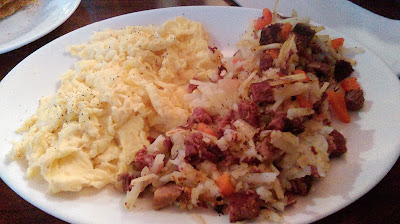 Corned beef is brisket or eye of round which has been pickled in a brine.  What gives it the pink color is about a teaspoon of sugar in the brine.  Years ago it took two weeks to pickle a roast.  Now with injection and powered seasoning mixes, the process can take less than 48 hours.

The Grill corns its own briskets and use two seasoning mixes, the names of which did not ring a bell to me.  The hash was tasty and had a slightly sweet-nutmeg tang to it.  My guess is that the flavor comes from one of the seasoning mixes, one of which goes in the brine and the other on after when they sauté it with red bell peppers. 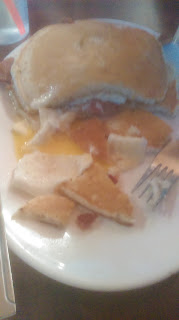 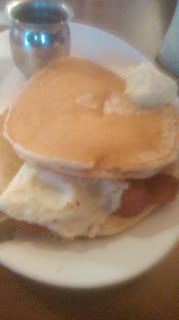 The special for the day was a pancake sandwich with two pancakes as the bread.  Inside was bacon and over-easy egg.

The dish came with a meat of choice and eggs they way the customer wants it.  Hardboiled would have been difficult to get in between the two flat cakes.

I didn't use the syrup until after I finished the egg.  My concern was that the syrup would overwhelm the taste of the egg.

This dish turned out to be a great surprise for a special. 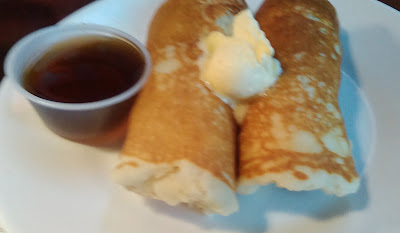 That's a bummer.  I should order a double from the kids menu.  Neat link sausage inside of the pancake roll.  Grandson Graysen ordered it but did not share the sausage.  This needs to be on the grown-up menu! 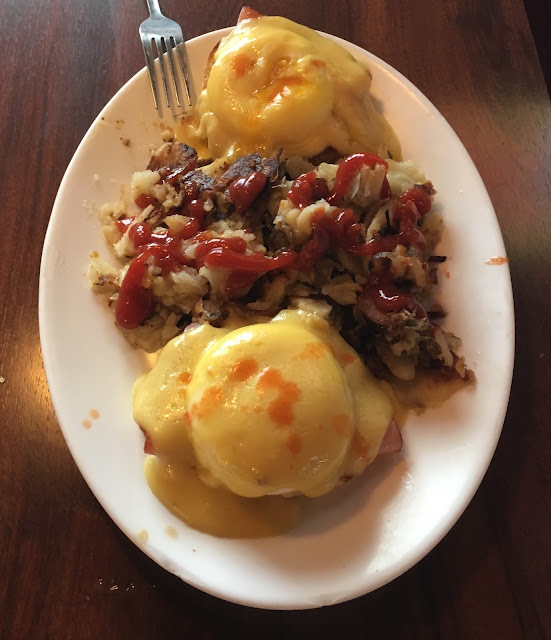 Hollandaise sauce, that's what makes a great Benedict, and that is in the amount of egg yolk in the sauce.  An easy recipe: egg yolks, lemon, and melted butter.  It's heated in a double boiler to keep from scrambling the eggs.  I use a thin tin pot and just keep moving it from the fire or adding butter.  The fool-proof way to make it is to follow Bill Beard's advice and mix the lemon juice and yolk in the blender and add melted butter.

The Hollandaise sauce at the Grill is just as good as mine, rich with egg yolk.  Eggs are poached perfectly.  At 12:00, you can see the yolk starting to run.  The Grill knows how to make Eggs Benedict.