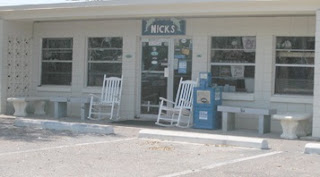 Nick's is one of many really good seafood restaurants in the Greater Destin Area.  Particular to my likings are their deep-fried appetizers and entrées.  Thanks to my nephew Tony for finding this place.

Nick's is located off FL20 in Freeport, just a few miles east of US-331 that intersects with I-10, but I don't recommend that route because of the traffic backup.  Construction is fixing that problem, but not for a couple of years.  Rather take FL85 to Destin and drive east on FL20 until you get there.  FL20 is not that efficient, but the traffic flows.  There's quicker routes once you're on FL85, but don't check your GPS until you exit 1-10.

Don't go on a Monday; the Nicks have taken the day off.  Give them a break, they need one day off!

For more info, go to: http://www.nicksseafoodrestaurant.com.

Tony took this pic for me when we were visiting for a beer.  The gator is great and it doesn't taste like chicken.  It tastes like gator.  Full of flavor and chewy as gator usually is.   Gator without the fat is generally a great meat to cook just about anyway which I have: fried, gumbo, sauce picante, and stewed in a remoulade sauce.  Know the month(s) of gator season in a given state before buying frozen gator.  I would buy gator in one or two months after gator season closes.  Never buy it the month before it opens, you're probably getting old gator. 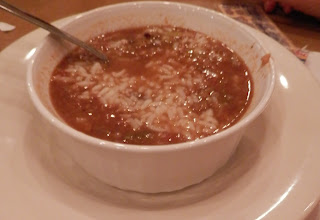 Nick's seafood gumbo has this traditional New Orleans flavor to it.  Loaded with seafood.  All it needs is a dash of Tabasco Sauce. 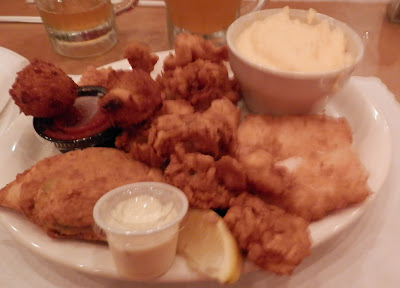 Their seafood platter is amble to fill oneself on, but not give a belly-ache in trying.  Nick's allowed me to sub the whatever-on-the-platter fish for grouper.  Also on this fired seafood plate are oysters, shrimp, hushpuppies and stuffed crab.  All seafood platters come with a cub of gumbo. 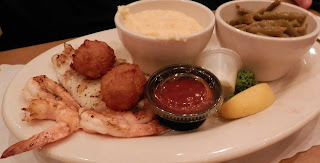 This plate has four grilled shrimp and grilled fish.  It comes with two sides.  One of the sides is a signature dish for Nick's.  It's their creamy cheese grits made with Velveeta Cheese.  The Velveeta gives the grits its creaminess. 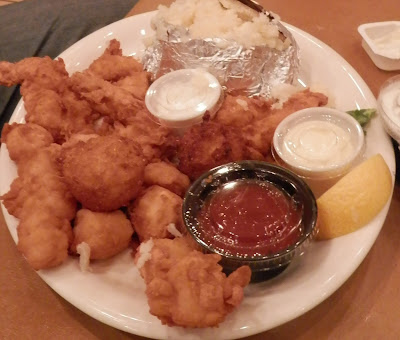 For someone with a smaller appetite, there is the fried seafood combo.  The combo above is fish and shrimp.  But also available are oysters and scallops.  Bake potato was the side of choice on this platter, though one could order fries as well.


Grouper, the State Fish of Florida:

Not pictured (because it was not ordered) is the grouper plate.  My recommendation if you are traveling the Florida coastline is to order grouper whenever possible and wherever possible.  This fish is thick, flaky, and not oily in taste.  Grouper has to be the state fish of Florida.  It is almost always fresh, it is everywhere, and the cooks in Florida really know how to prepare it.  There is a small image of their grouper on my seafood platter, but it doesn't do this great fish justice.