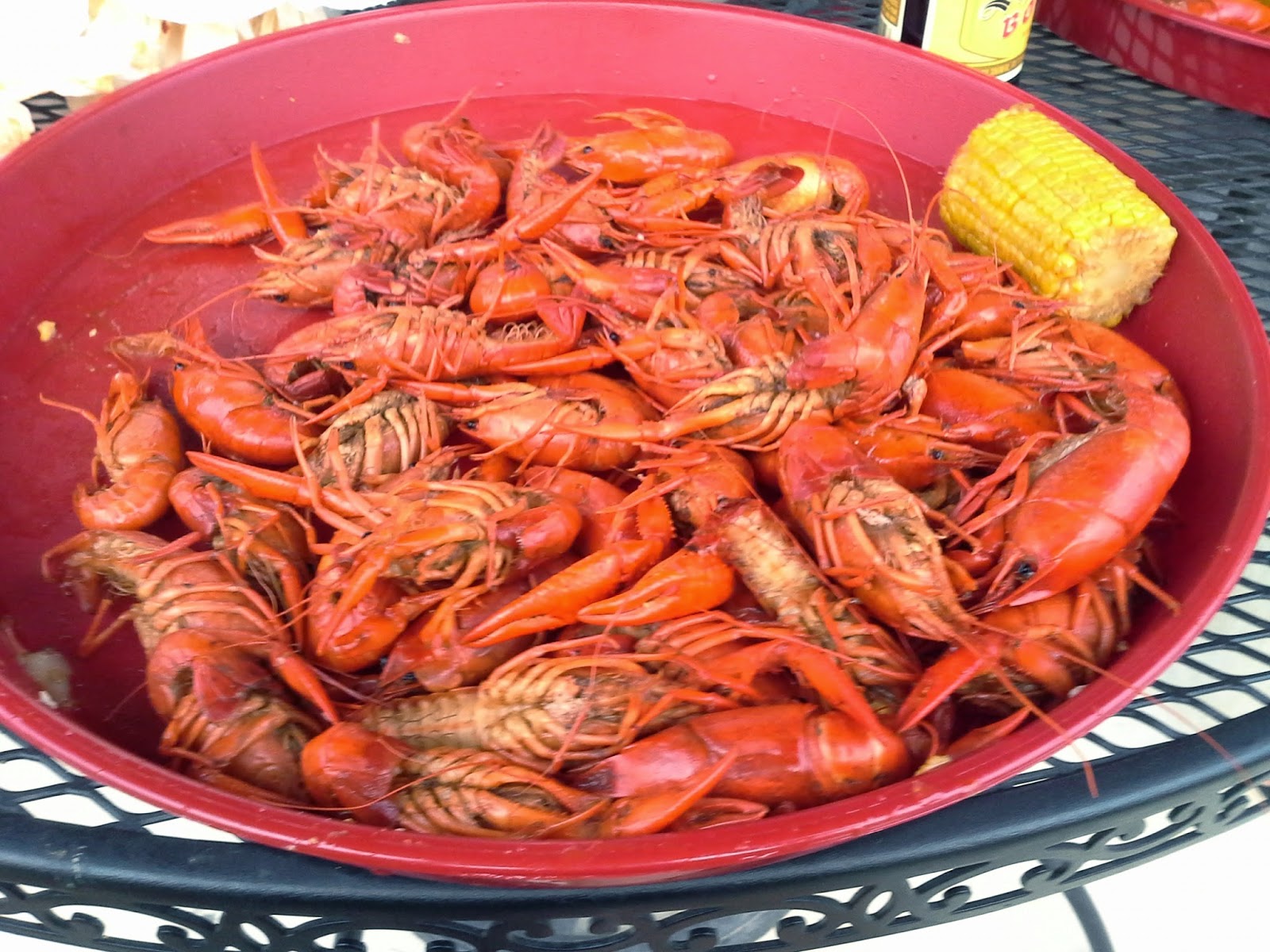 WARNING: IF YOU HAVE AN ALLERGY TO IODINE OR SHELLFISH, DO NOT EAT CRAWFISH. 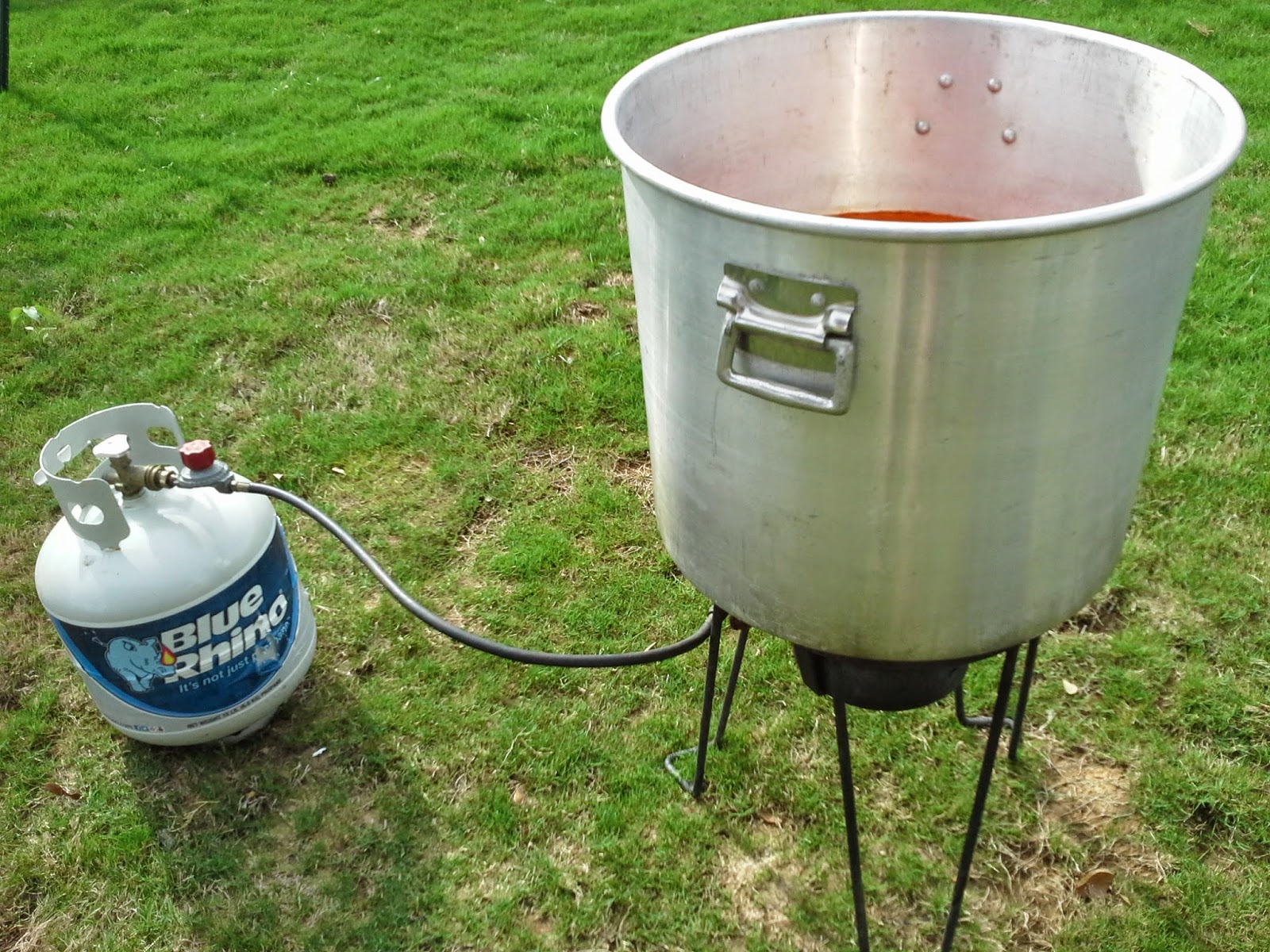 The most efficient way to boil sack-level crawfish is outside with propane (or natural gas) fuel in a large pot.  This size pot will require two batches to do one sack.  Smaller batches can go on top of your stove in a not-so-large pot.  It will take all night to boil a sack of crawfish on your stove top.  Trust me, I have done it … once. 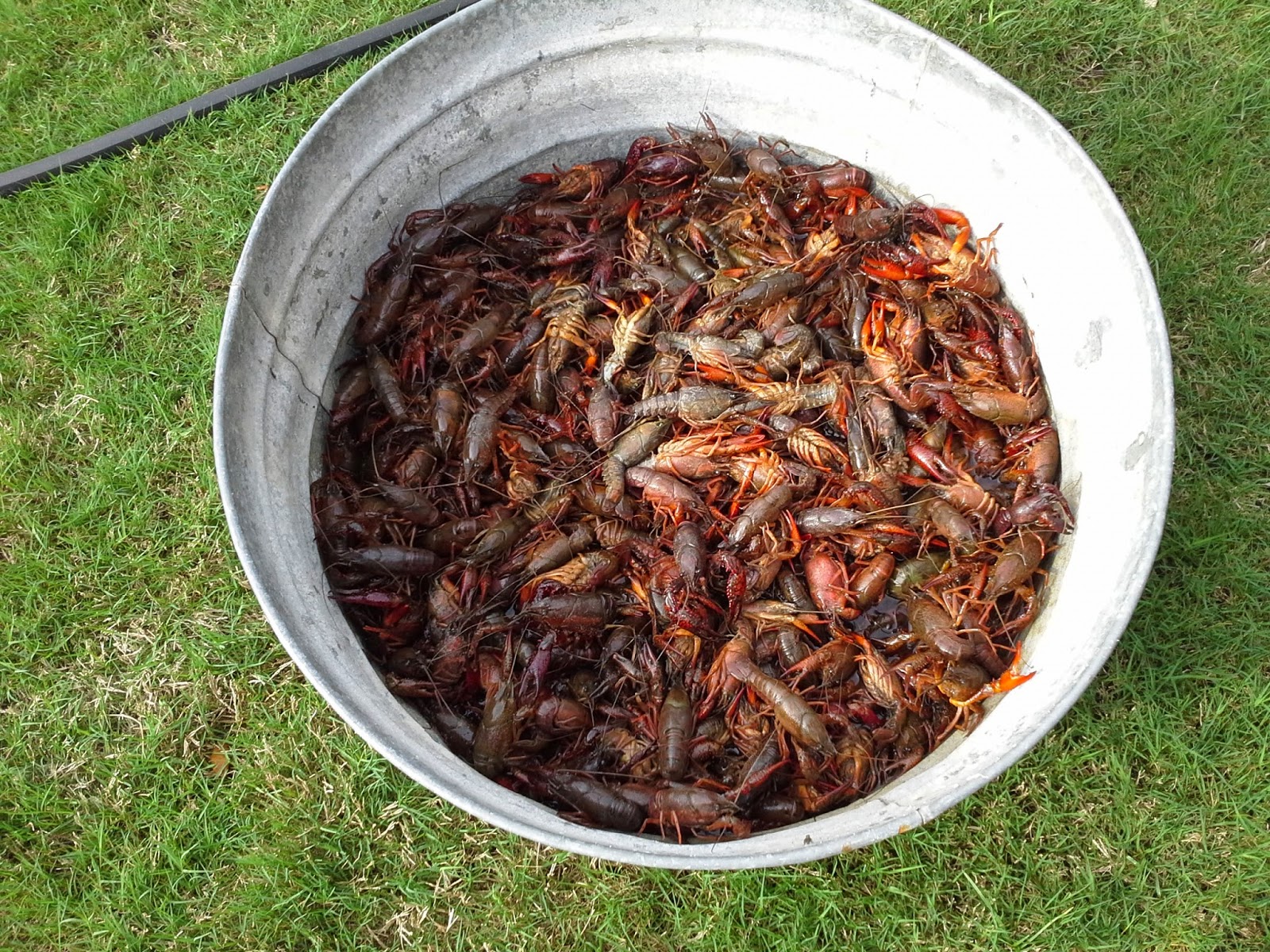 Merto put two pounds of salt in this pan with the crawfish and covered them with water to purge them.  Purging is a nice word for making them poop.  Two pounds of salt will clean out a sack of crawfish as best as any other method will. 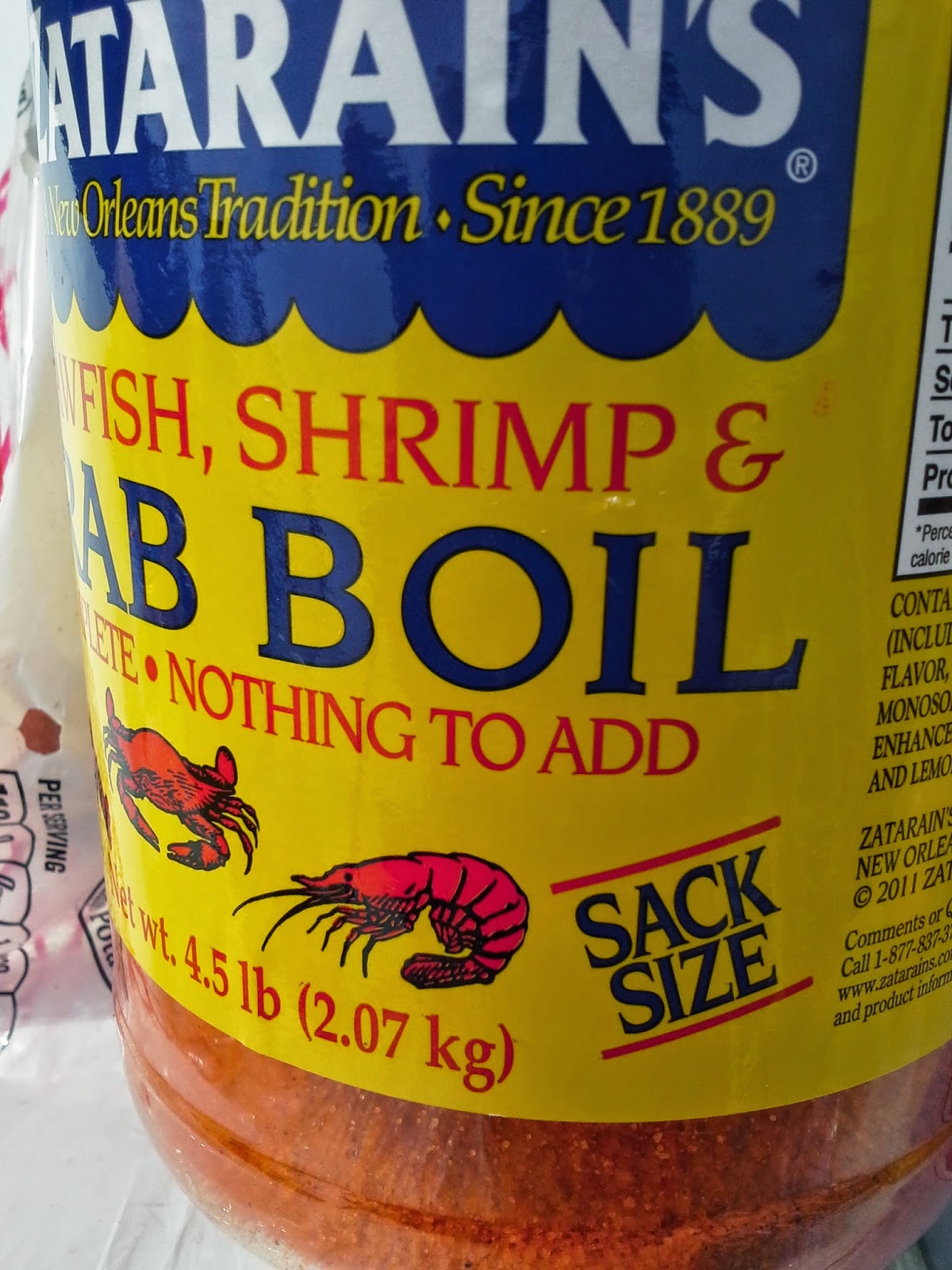 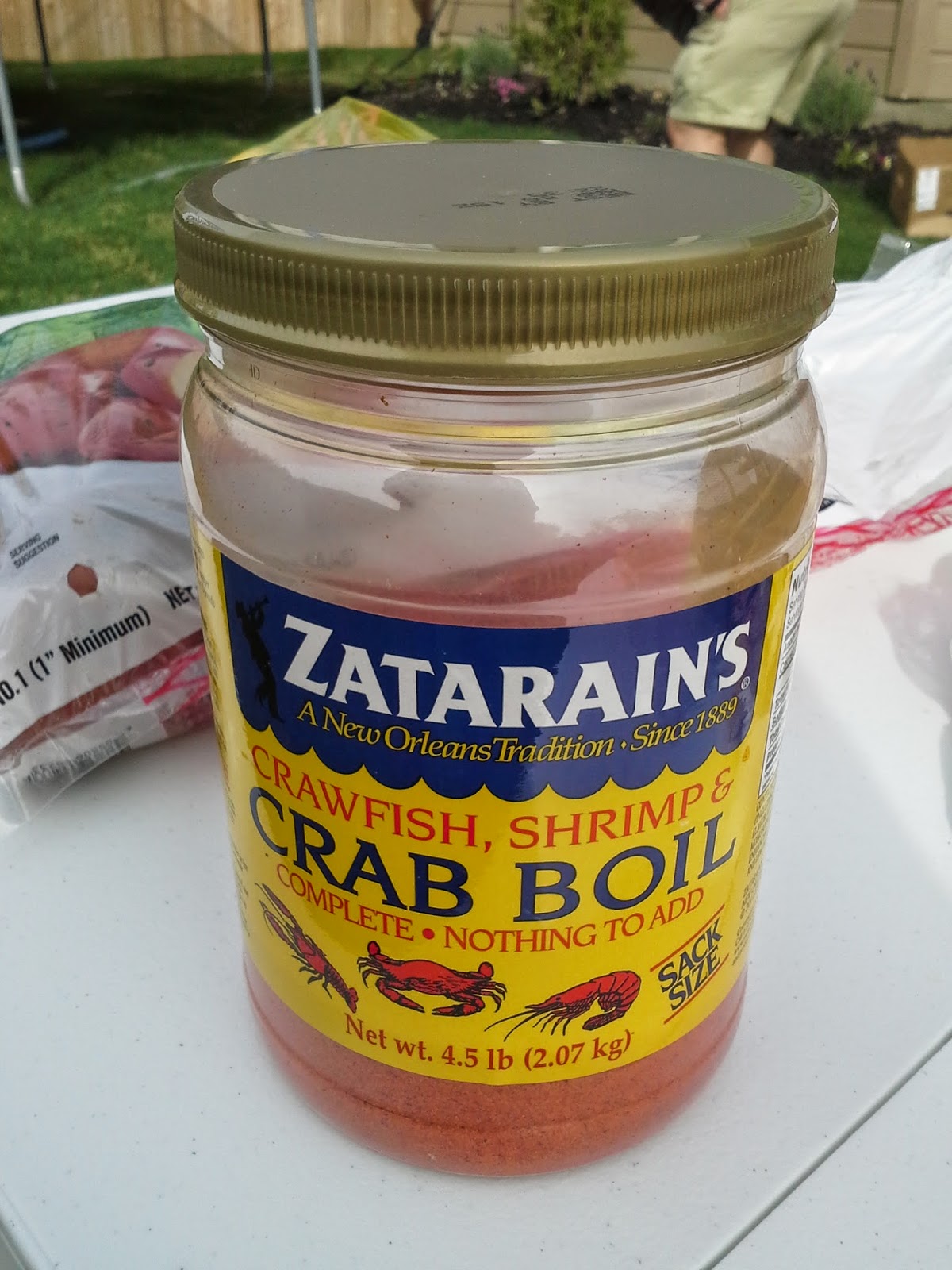 Zatarains Crab Boil is one of the best seasoning mixes I know for boiling seafoods.  Note that one of these 4.5 pound containers is good for a sack of crawfish (see the "sack size" note on the label on the right).  Add about 2/3 of the container to the first batch and one pound of salt.  When you're ready for the second batch, don't change out the water; there's still a lot of good seasoning in there but not much salt.  In the second batch add the final 1/3 of the seasoning and another pound of salt. 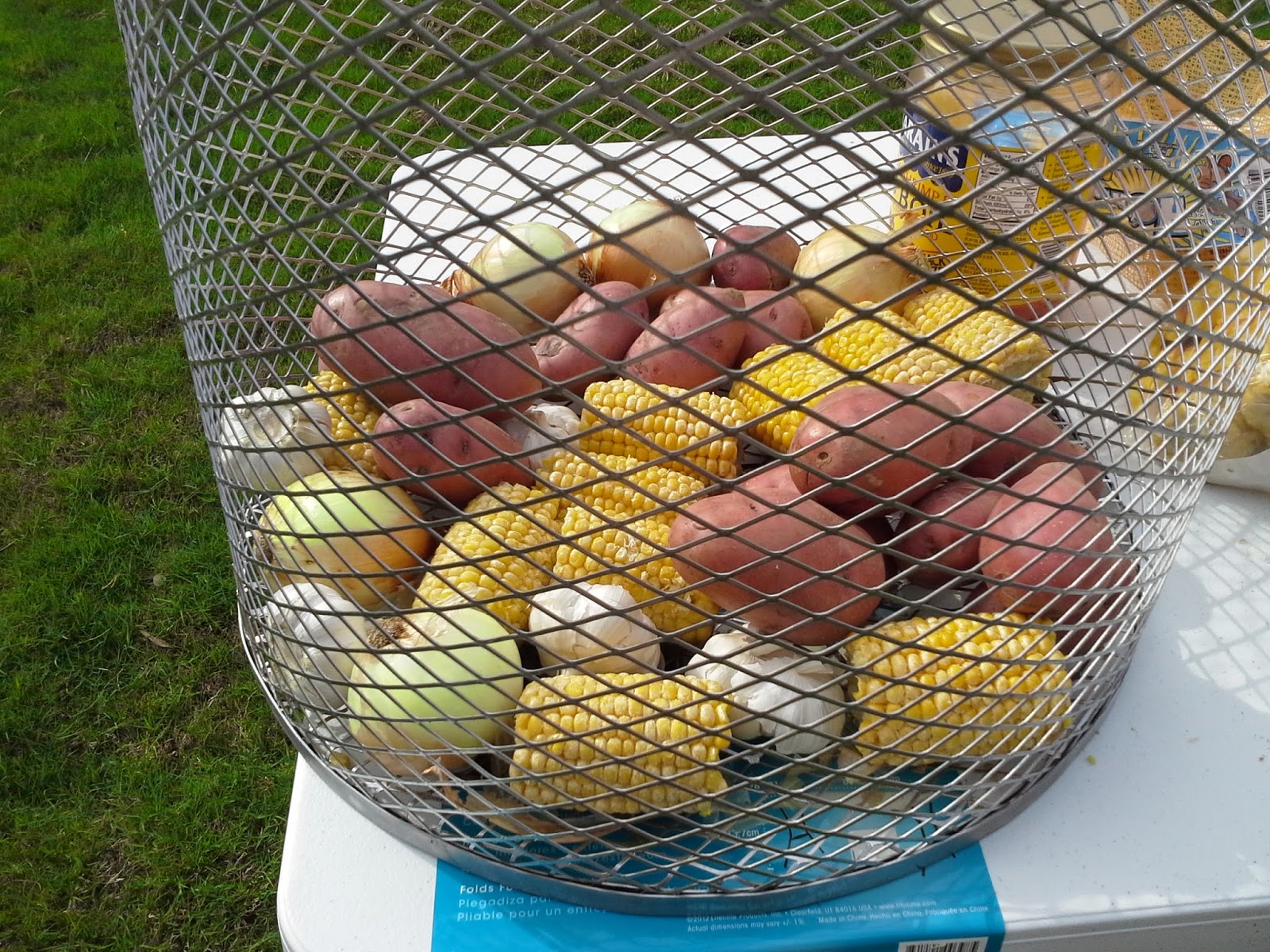 Potatoes and corn to eat with your crawfish.  Onions and garlic to season the boil.  My Uncle Pete uses celery as well.  All these veggies will soak up the seasoning and are good to eat afterwards.


Bring the Seasoning to a Boil: 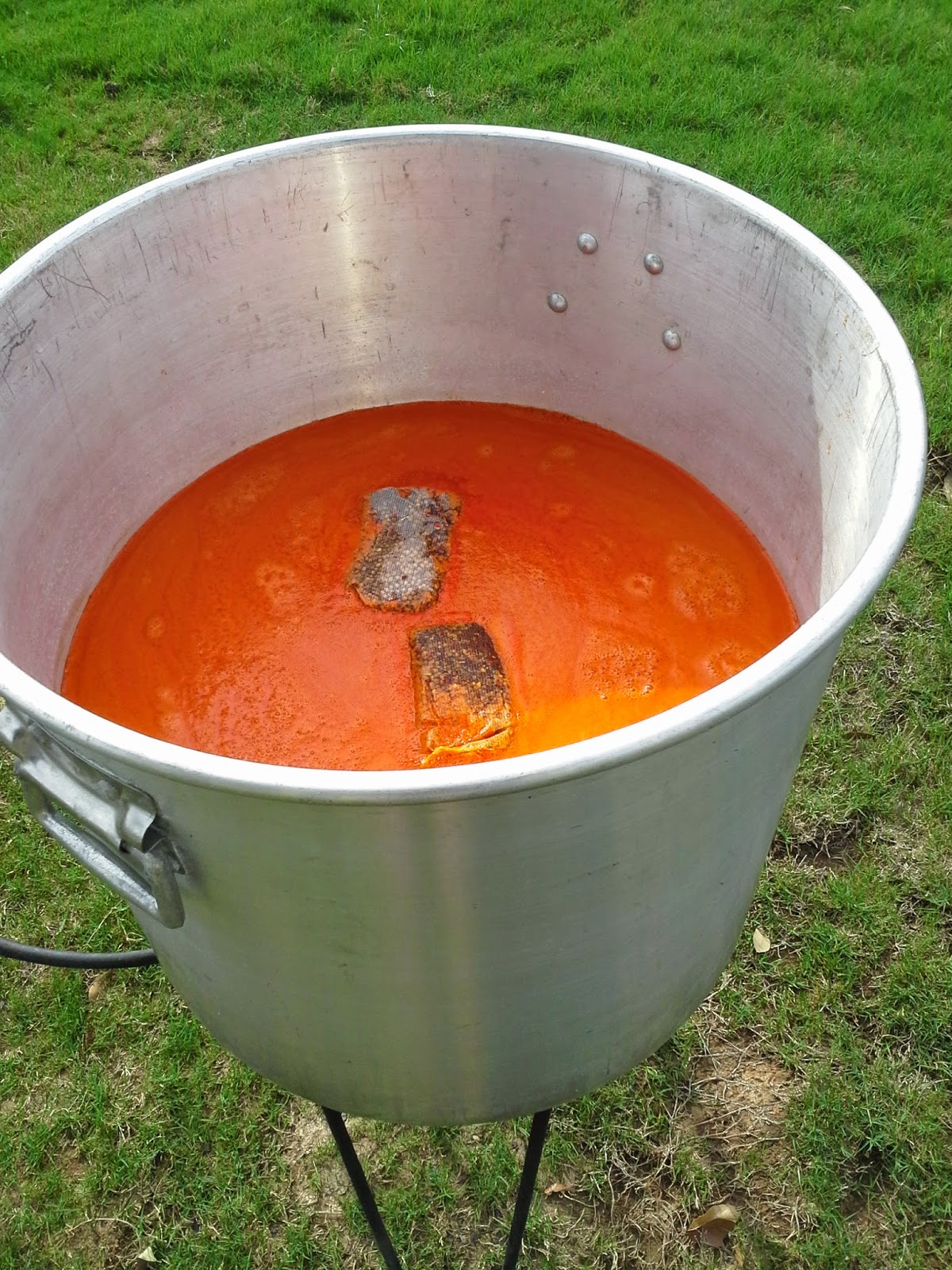 Those tea-bag looking things are bags of crawfish boil to jump the flavor up a few notches.  I prefer jumping it up with liquid crab boil, but the bags also work.  Add the veggies as soon as the batch comes to a boil and boil for about 20 or so minutes.  Take the veggies out and set aside.  Feel free to add more onions, garlic, and celery to the first batch of crawfish.


Now for the Crawfish: 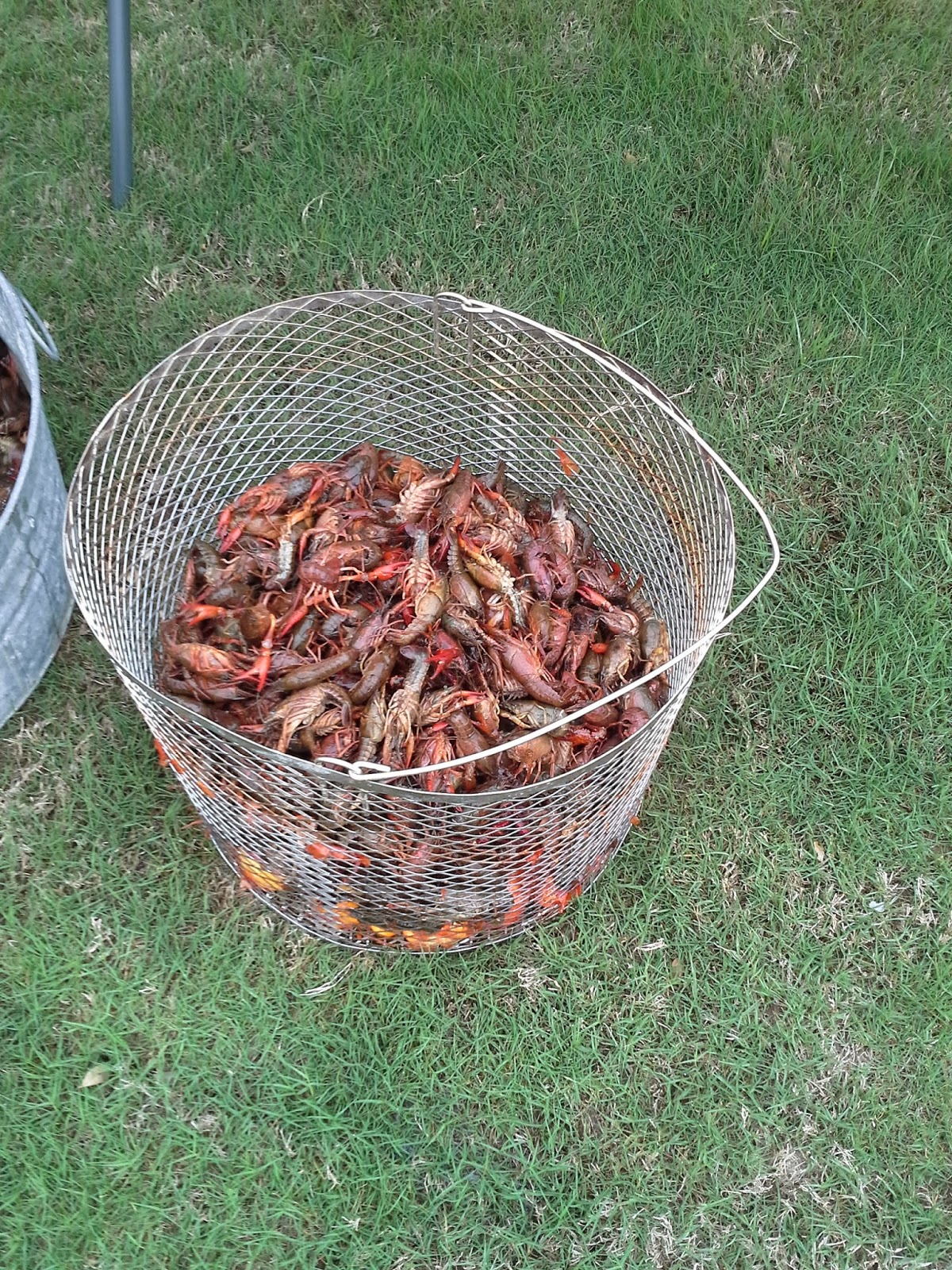 Pull any dead crawfish from the batch.  Add the live crawfish to the broth and wait for the mixture to come to a boil. 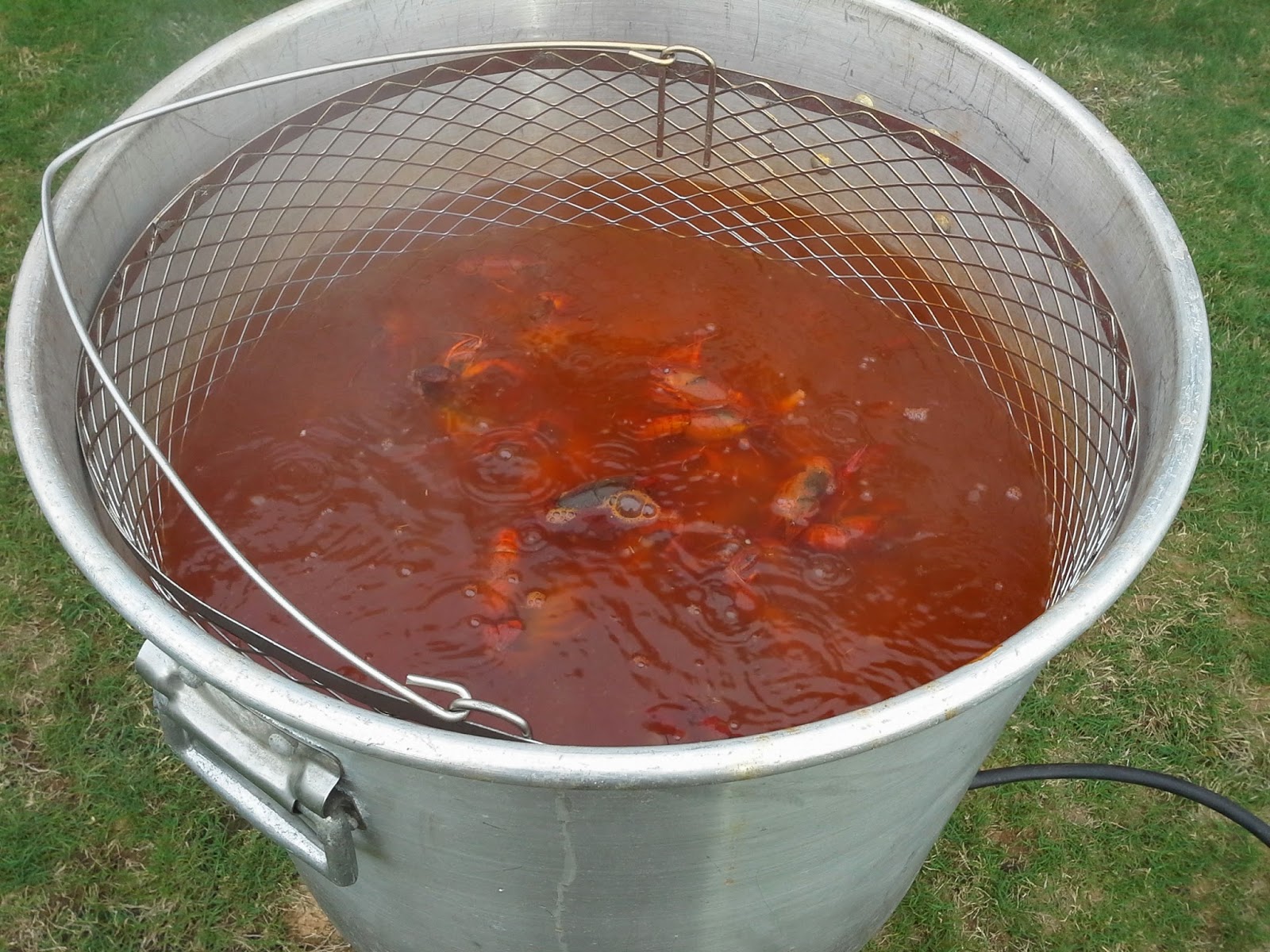 Once the broth begins to vigorously bubble, boil the crawfish for three minutes and then cut the fire.  The cooked crawfish will float to the top.  Allow the crawfish to soak for 30 minutes to take in the seasoning.  Add a half bag of ice to help the soaking along.  When you add the ice, the crawfish heads will fill with broth and skink to the bottom of the pot.

Note #1: if you have someone who cannot eat spicy food, don't do a special batch for them.  Instead remove the amount they want to eat from the first batch right after boiling and prior to soaking … and prior to adding any ice.  If that is not enough crawfish for them, repeat the process with the second batch.  That way, your guest will have mild, not spicy crawfish.

Note #2:  If you're serving Man-vs-Food type guests and they want their crawfish really hot, don't cook a spicy batch just for them.  Instead have some hot sauces and horseradish available for dipping. 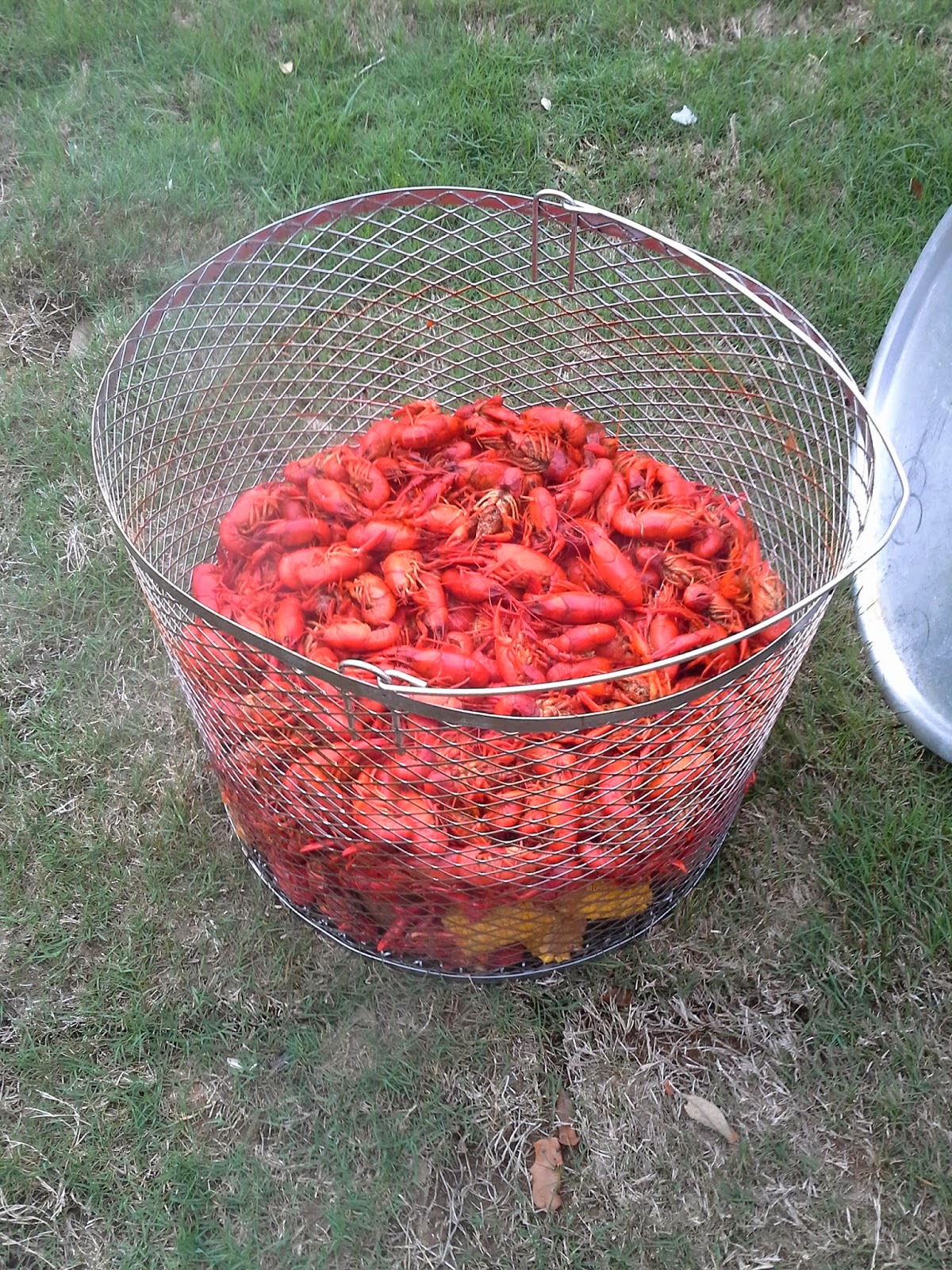 Look how succulent these crawfish are! 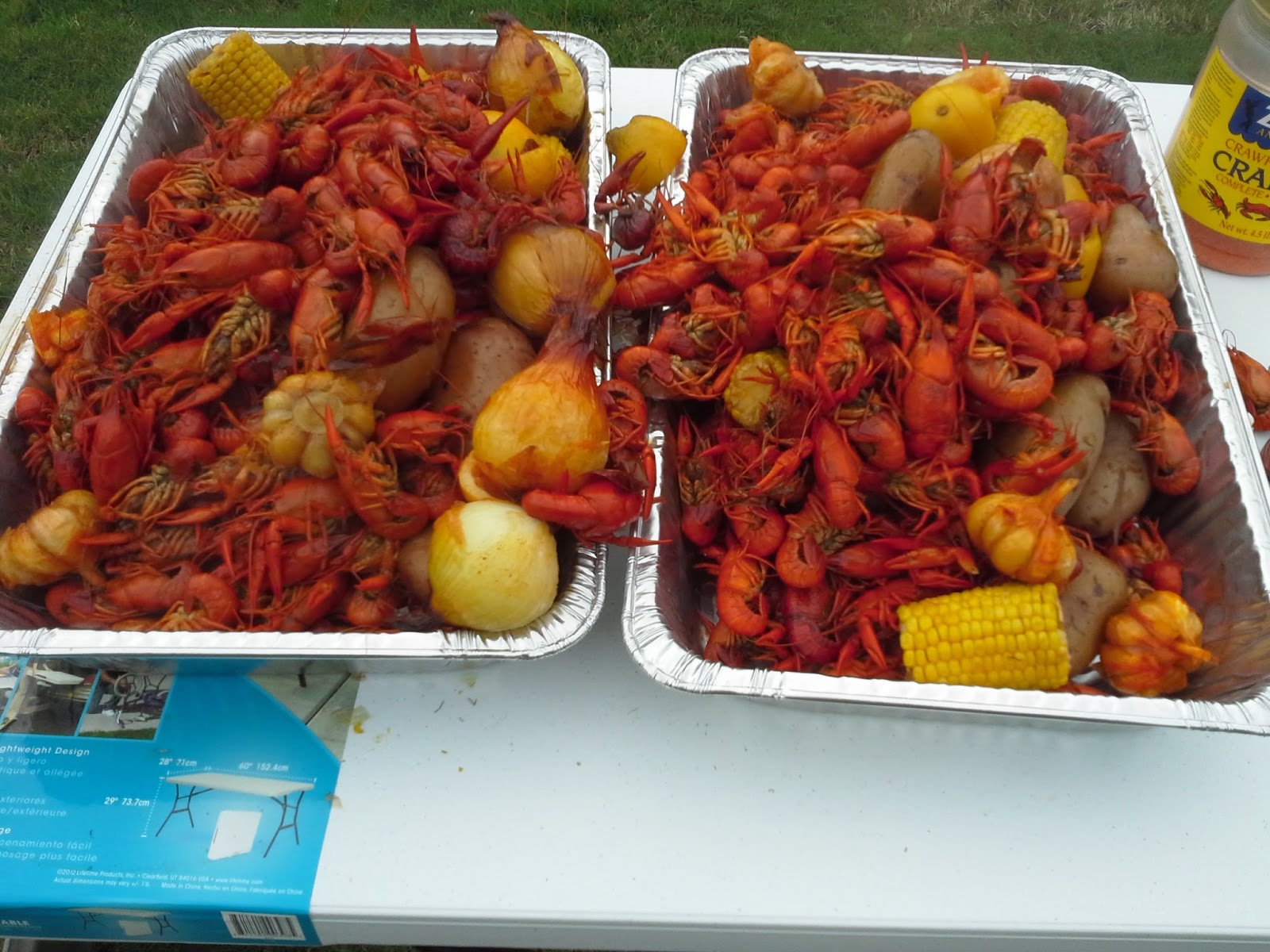 A half sack will fill up two of these aluminum pans.  Have lots of paper towels on hand for this is a messy lunch.  Live crawfish curl their tails when boiled.  If the tail is straight on a boiled crawfish, it was probably dead prior to the boil so I recommend not eating it, rather throw it away.


The Best Way to Serve Crawfish: 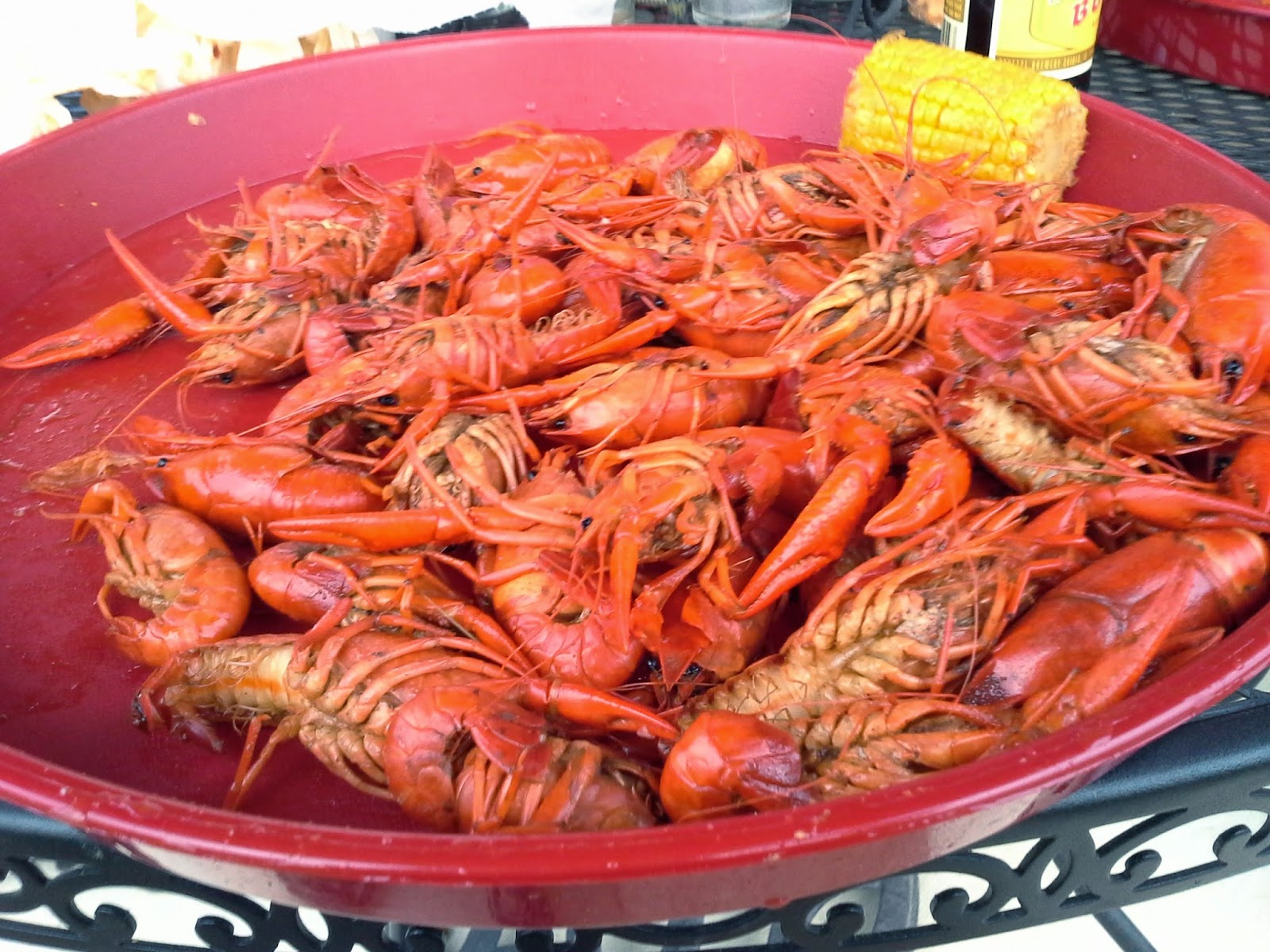 Paper plates don't work and you don't want to dirty up your everyday dishes with crawfish, let alone your good china.  So either lay out newspaper on folding tables or get some of these neat round trays.

Peeling crawfish is easy.  You first break of the heads and second suck the juice out of them.  (The second step is optional.)  Then you peel off the two layers of shell closest to where the head used to be and pinch the tail of the crawfish to get the meat out.

The big claws have a nice amount of meat in them.  Gently bite the body of the claw (most claws are soft, not hard like crab claws) and suck the juice.  Then slowly break the moveable part of the claw and pull out the meet.  Slid your teeth across that part, but do not bite, to remove the meat.  There is a membrane there in the part you removed that is not pleasant to swallow. 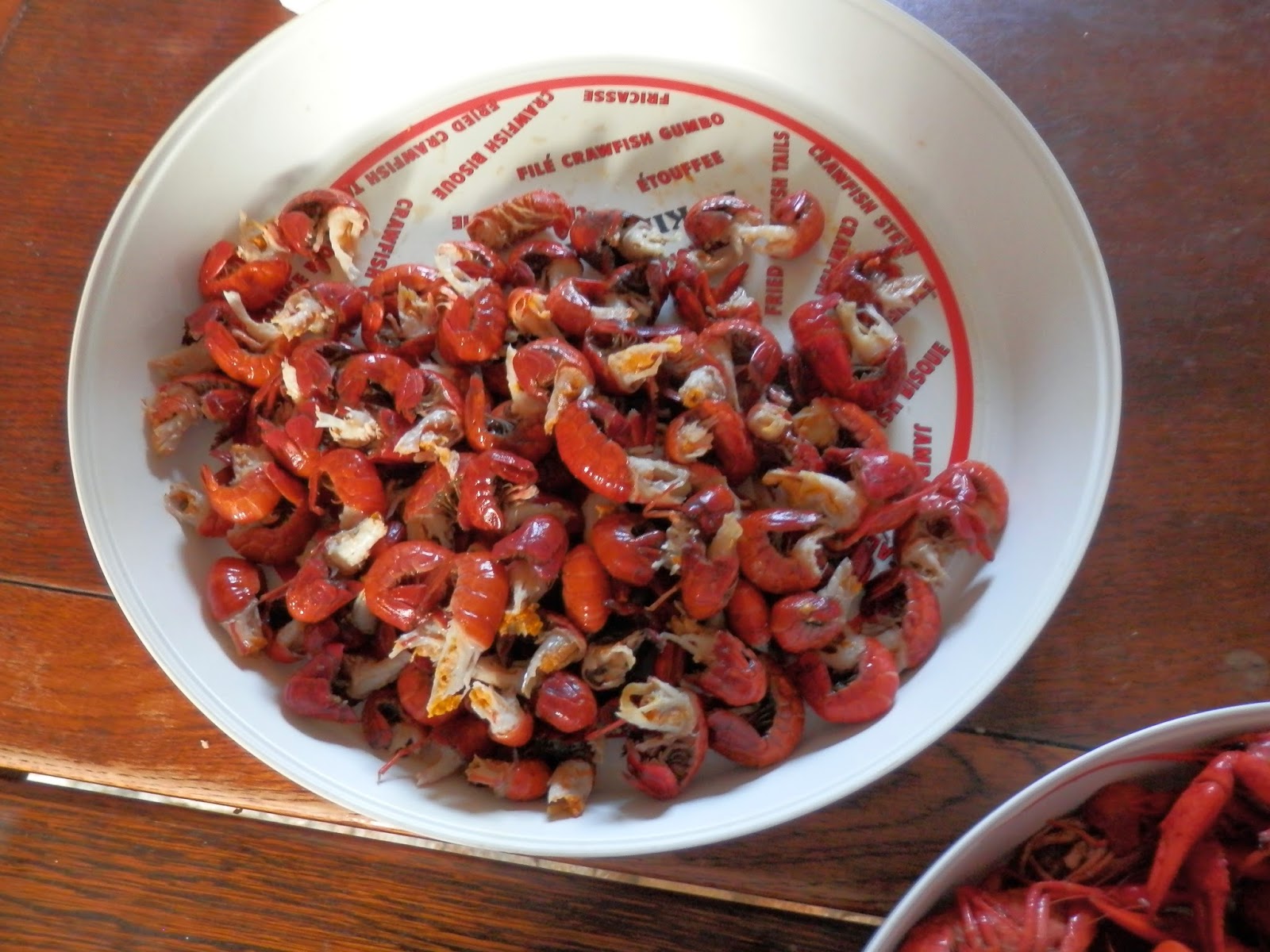 The fast way to handle leftovers is to break the heads off the tails, then bag and refrigerate the unpeeled tails for another day.  You can also peel and freeze the tails to make crawfish pie or ettoufee.

The un-sucked heads are good for a broth for a gumbo or stew later.  Just boil the heads for a half hour on your stove top.  Remove the heads and strain the broth.  Boil the strain broth until it reduces by 50%.  Freeze the broth in those old-fashion ice-cube trays.  Once frozen, remove the cubes and place in a plastic bag for later.

The leftover veggies make a great chowder.  No seasoning required!  And they go well with catfish nuggets (nice word for oily fish bellies).  Smush up the potatoes and remove the peeling from the garlic and clean the corn off the cop.  Cook the soup long and slow to let the oil cook out of the catfish nuggets leaving a really nice tasting soup.  You may want to add a pint of cream to the mixture.
Posted by Unknown at 8:06 PM No comments: