Phnom Penh, Cambodia, is about the size of a small city in America, but has at least 10 times the population.  This city is host to nearly 600 restaurants, many of which serve international cuisine because Cambodia country encourages immigration.  Typical breakfast here is noodle soup, a favorite of Asians.  But you know me.  I am going after more carbs and fats.  And here are my favorite finds: 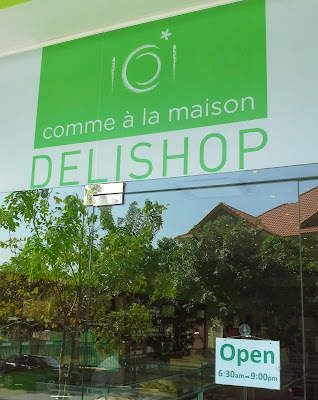 Comme a la Maison (the House of Food in French) is a bakery with all of the great selections that one would expect in a French bakery.  Cambodia, I believe, was colonized by the French, so some of their cuisine still remains. 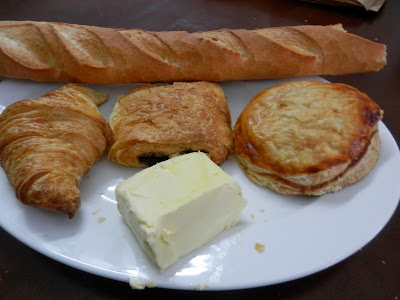 Usually the French breads are either water based begets or phyllo dough loaded with butter.  Both are true here.  A group of expatriate friends of my daughter Michelle gathered all of the different croissant rolls from across the city for a taste test.  The croissants at Comme a la Maison were voted the best of the best. 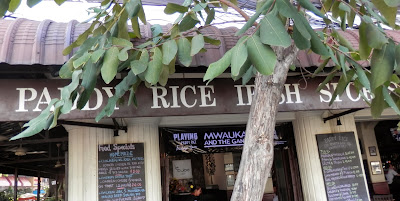 Typical Irish Pub with a Southeast Asia twist to it's menu.  I ordered a more traditional breakfast with coffee.  The Pub is located in the northern section of the city just across the street from the Mekong River.  I sat just inside where it was cooler and I had a view of the river.  Now-a-days with a growing economy here, there are very few street solicitors in Phnom Penh, but they will solicit from those who sit outside in the sidewalk cafe portion of restaurants.  Inside you can have an uninterrupted breakfast. 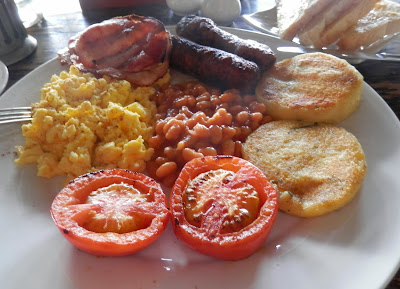 The full farmhouse breakfast: eggs anyway you want, beans, grilled tomatoes, potato paddies, buttered toast, and two slices of round bacon.  Round bacon is typical in Cambodia.  Here's the best part: two links of homemade Irish pub sausage.  My daughter has been living here forever and doesn't know about this place. 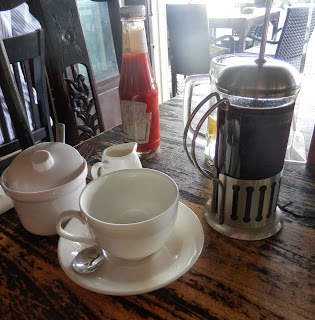 Coffee the Cambodian way:  On the right is a French press coffee pot in which is placed boiling water.  After it seeps, you push down on the plunger on top as you pour and brewed coffee comes out.  This pot holds three cups.  For you diet freaks, coffee in Phnom Penh is served with white sugar; you have to ask for sweetener.  This coffee had a slight, but tasty cocoa flavor. 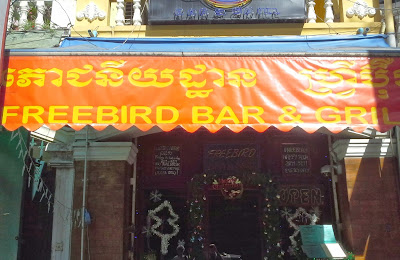 No angry birds eat here.  A little know international secret is that bars have some of the best breakfasts.  Freebird is ranked on one listing as 21st and on another as 35th out of 571 restaurants in Phnom Penh. 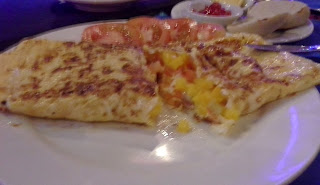 Freebird is a favorite spot of my friend Glen's.  He typically orders lower fat breakfasts (veggie omelets) with a side of fresh tomatoes ... but not me. 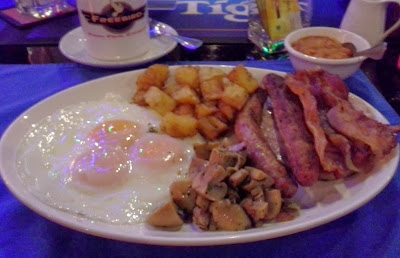 Here is their full breakfast which I ordered.  It comes with three eggs, strip bacon, sausage (hiding next to the bacon), mushrooms, beans, and crisp home fries, along with juice and a cup of coffee, all for $7.50.  Their home fries must have been deep fried, and were the best I have ever eaten … anywhere. 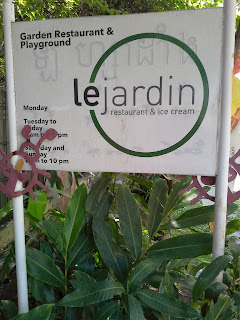 Le Jardin's is a great place to take kids: it's outdoors, has a slide, and a huge sandbox. It's as close to a McDonald's Playground that you will get in Phnom Penh.  The kids' menu is as good if not better than the adult menu.  An adults aren't allowed waffles and chocolate pancakes.  My grandchildren love this place and so do their parents.  It's ranked 73 out of 571 restaurants. 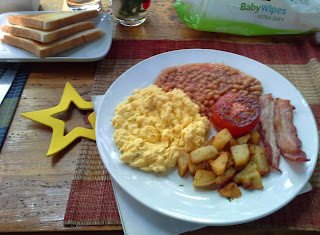 My daughter ordered the scrambled egg plate and opted beans for the sausage.  With each breakfast are home fries, grilled tomato, toast, sausage, and strip bacon. 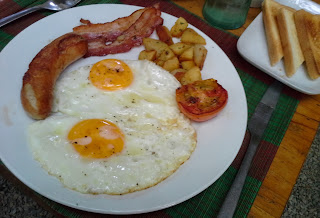 I ordered eggs over-easy.  Note there are no beans on my plate, but there is the sausage.  Sausage in Phnom Penh, unless it's made in-house, comes from Dan's Meat Market.  Dan's will be another posting.

Posted by Unknown at 7:09 AM No comments: