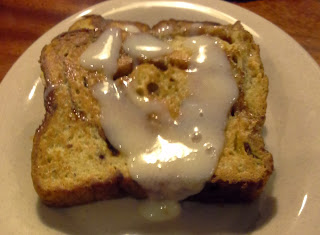 Iced French Toast … it doesn't get better that that unless you're at the 43rd Street Deli just outside of Gainesville, Florida.  This is a place worth menu surfing.  By the way, you can order one, two, or three slices of French toast.  My niece Alex settled for one.  Good for her … but not for me! 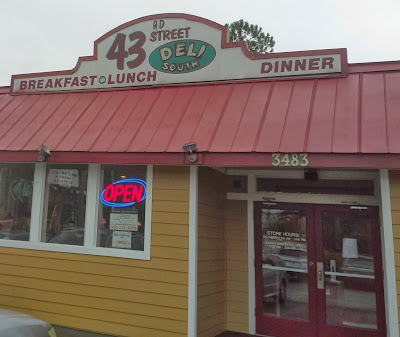 Guess what street in Gainesville the place is on?  Just take I-75 south of Gainesville to Exit 382 and turn west on Fl-121 (43rd Street).   There's a second location on the west side, but I haven't eaten there. My guess is that it's the same great food. 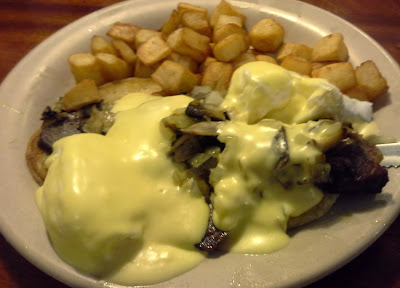 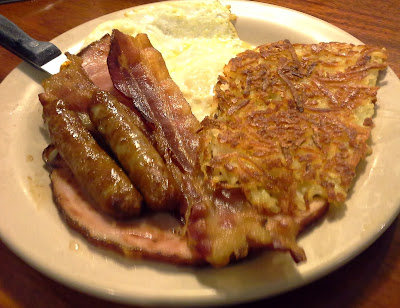 Carnivore, are you hungry?  Try the big boy: two link sausages, two strips of crisp bacon, and a 4 ounce slide of real ham, that that no-fat processed stuff.  You get two eggs any way you want, hashbrowns (grits or home fries) and biscuit or toast.  This is literally "Hog Heaven".  (English sticklers, note the period after the quotes.  Did that on purpose because the rule doesn't make sense.)

This is a real croissant, I mean flaky, with all kinds of good stuff inside. 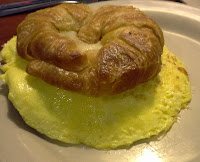 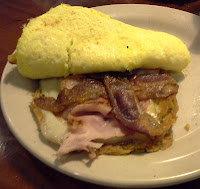 And look what's inside: Egg, Bacon, Sausage, Ham, and Cheese. 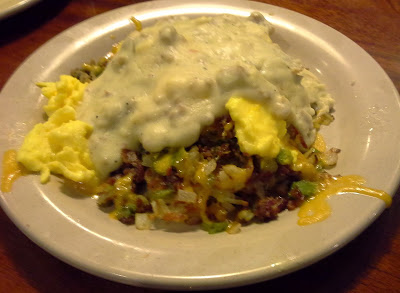 43rd has nine busters with home fries or hashbrowns coated with egg and some other great stuff.  But the Country Buster is my favorite: onions, peppers, bacon, and sausage smothered in cream gravy.  This breakfast will take you through sunset.

The grits are great here as would be expected in Florida.  A mom-n-pop restaurant would not last long here if the grits were not great.


Their menu hosts over 35 items, not counting the mix and match two-egg breakfast.  There is not enough time for me to surf all of their items for you and not enough space to display all of their items.  Instead go to their website: http://www.43rdstreetdeli.com and pull up the breakfast menu.

On my next visit to Gainesville, I'll be back to the 43rd St. Deli, this time for either their Fire Cracker Omelet (smoked sausage, bacon, jalapenos, onions, and pepper-jack cheese) or their Meat Lover's Omelet (apple-wood smoked bacon, diced ham, crumbled sausage, and a choice of cheese).   Maybe I'll top twice and get both!

Posted by Unknown at 1:55 PM No comments: