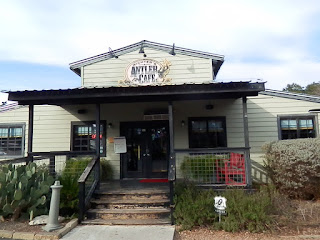 If you are traveling through central Texas or live in the greater San Antonio area, the Antler is a must stop.  Once located on US-281 north of San Antonio, this established fixture on the Bulverde/Spring-Branch landscape has been serving deep fried lunches and dinners for decades.  Years ago, the Antler Cafe served up great country breakfast as well.

Recently the 281 property reportedly sold from under the Antler at the same time a barbecue joint on TX-46 closed its doors after a short run.  The Antler moved to that location, just a few miles east from its previous location.  The first location hosted by my estimate 7000 antlers on the ceiling.  Now in the new place has much less, my guess is a paltry 2000.  If you are in the 1-10 area in Boerne, just take TX-46 east for about 40 miles.  If you are in the I-35 area in New Braunfels, just take TX-46 west for about 30 miles.  If you are in San Antonio, just drive north on US-281 for 20 miles north of Loop 1604 until you get to TX-46.  Exit there and drive east for a few miles.

I have eaten just about everything on the menu except the calf's liver ... and that’s not going to happen.  The place has a salad plate and a vegetable plate as well if you are not inclined to eat what I eat as well as great grilled food. For more info, go to www.antlercafe.com. 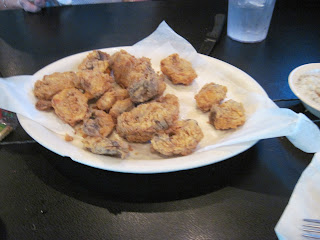 My favorite starter is the fried mushroom plate which is large enough to hold two or more diners until the entrée comes out.  Served with white country gravy, this is a wonderful way to start a meal.  I always load in the black pepper to my gravy.  If you notice a few mushrooms missing, that's because I couldn't wait for the photo snap. 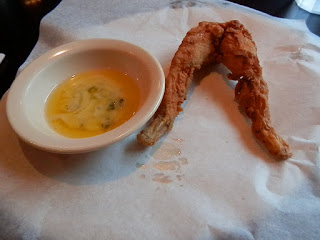 Another great starter is the frog leg plate served with a butter dipping sauce which they will gladly swap for a white gravy if that is your interest.  Yes, you see it right ... the legs are connected.  Looks like you could put GI Joe fatigues one them. 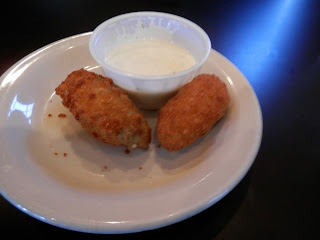 Other great appetizers are the stuffed jalapenos and the wings.  The jalapenos are stuffed with cheese and are mildly hot.  Two to four of these shouldn't bother the average eater.  Six maybe, but not until the next day.

Now we come to the wonderfully fried entrées:  chicken fried steak, chicken fingers, catfish, shrimp, and pork chops (but not the liver for me).  Most of these plates have more than what the moderate eater can ingest in one sitting.  My favorite are the chicken strips which are about the best I have had anywhere.  Most of the deep-fried entrees have grilled counterparts..., obviously not the chicken fried steak.  Fried dinners are priced under $10 unless its a lunch special, then it's cheaper with free iced tea.

Each dinner comes with a salad and dressing of your choice and don’t expect something fancy like raspberry vinaigrette, just the regular stuff which includes blue cheese.  The entree plate has Texas toast with two sides of your choice.  Great mash potatoes, and there are small chunks of jalapeno in the mac-n-cheese, but I usually get the fired ochre. For those who prefer green veggies, the green beans are great and if you’re lucky, you’ll get a chunk of boiled bacon with it. 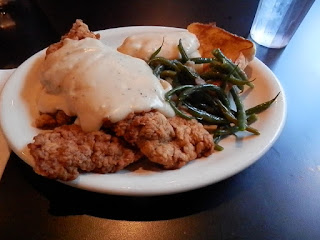 This plate also comes in a large or small portion, and I always order the large.  These breast strips are perfectly cooked to a crisp on the outside leaving a moist inside.  Only a hot, quick fry can thoroughly cook chicken without losing its moisture.  To me, this dish is as perfect as perfect gets. 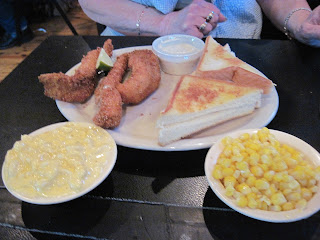 Three huge fillets, they must each be eight or nine inches long, all completely cooked to the center.  If you're in a seafood mood, the Antler's catfish make a great catch for lunch or dinner. 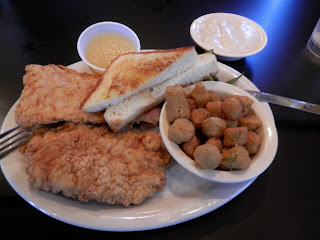 Another favorite of mine is the fried pork-chop plate.  Like the chicken strips, the meat is thoroughly cooked without losing its natural moister.  And you get two, not one, chop, both of which are boneless. 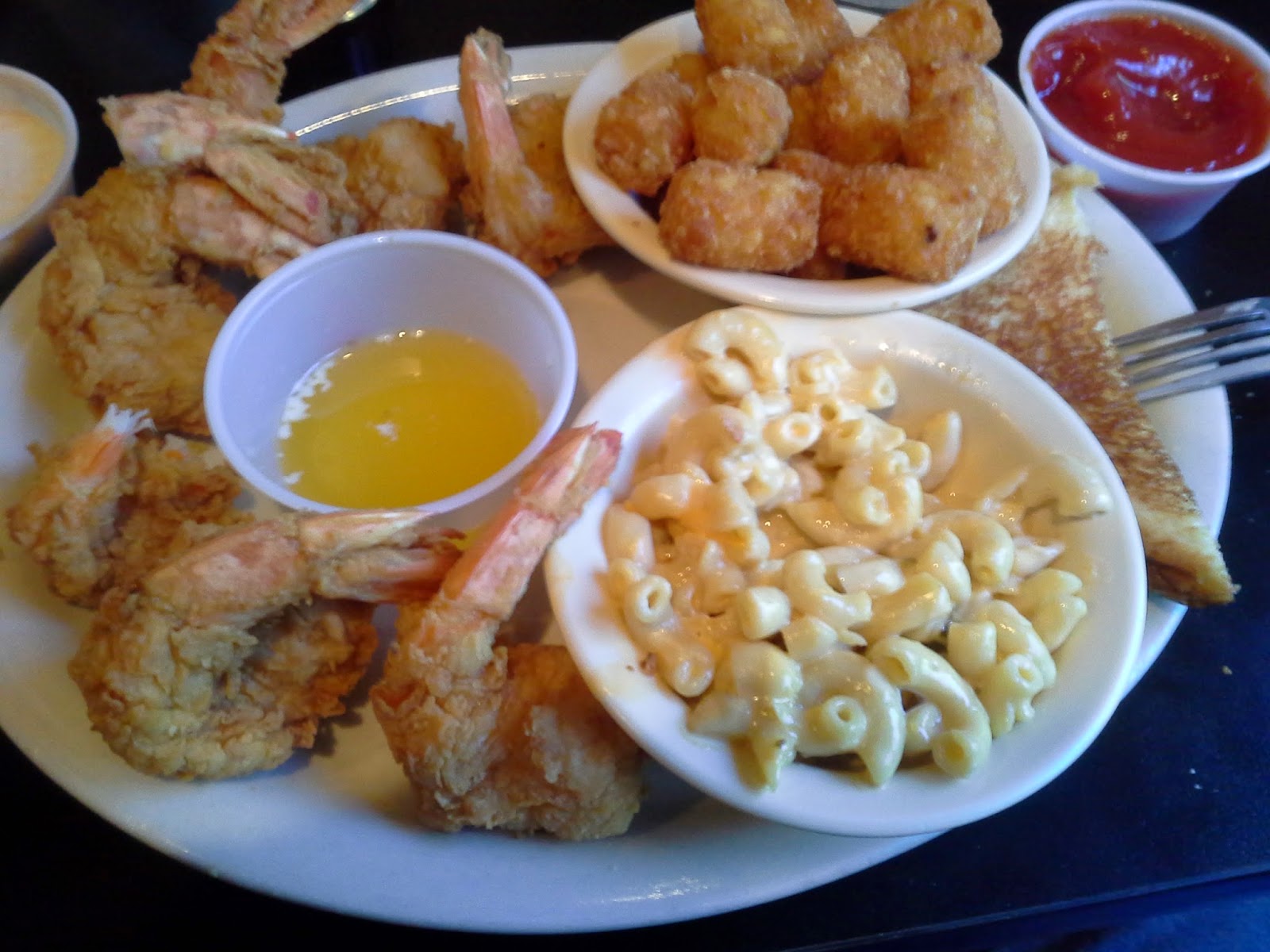 Six huge shrimp perfectly fried along with the tater tots.  And look at that butter … what a great way to serve fried shrimp.  And did I say, the mac-n-cheese has jalapenos in them. 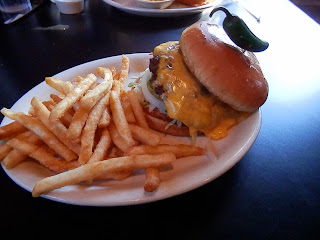 Not everything at the Antler is deep fried.  The Inn’s hallmark dish, in my opinion, has always been the hamburger ... a paddy made from scratch that has to weigh in at more than half a pound.  And get it with everything on it as well as CHEESE!  Bacon is also an option.  Expect a sandwich slide before it is over, and a tasty mess to follow.  This is not a burger for the dainty eater.  The fries and burger should satisfy a football player after practice ... maybe not a lineman. 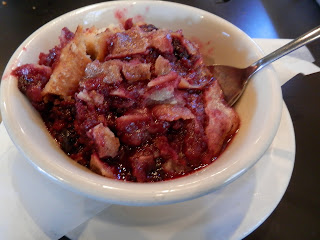