A Plate of Jambalaya: 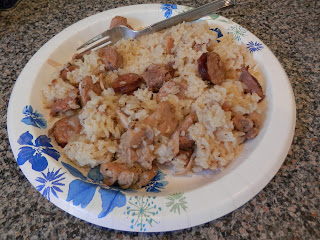 Here it is:  JAMBALAYA, a Louisiana rice dish cooked with sausage, pork, and chicken.  Jambalaya is pronounced jum-ba-li-ya.  It is a Caribbean dish that found its way to Creole New Orleans and later to Cajun Southwest Louisiana.  I learned how to cook a jambalaya watching the masters in Gonzales, Louisiana, cooking in a massive black-iron pot (about the size of a small hot tub) on a wooden fire.

I prepared this Jambalaya for about eight guests, but used the bigger pot below.  Potted the leftovers in the small pot for storage.

Which Pot to Use: 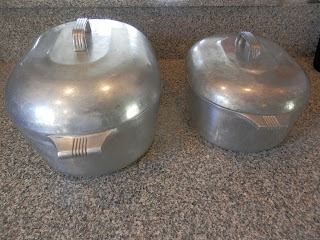 I prefer Magnalite pots which I don't think are retailed anymore except on-line.  These pots are heavy-duty cast aluminum.  Other pot brands don't have the same weight or thickness.  The lids on Magnalites are so heavy that you don't have to worry about the seal, but that is a problem on many of the other brands.  Previously I used black iron cookware, but my wife introduced me to Magnalite pots.  So my black iron pots were given up in a  garage sale.

Which Size Pot to Use: 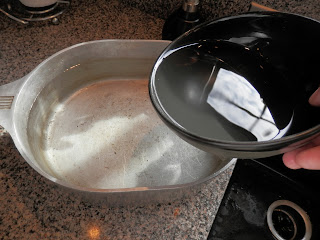 I have a large bowl which is about the size of one large plate serving.  Knowing how many people I expect to serve, I water-fill a pot with this bowl until I reach twice that amount.  Most of my guests have two servings.  The small pot holds 8 quarts and the larger pot holds 16. 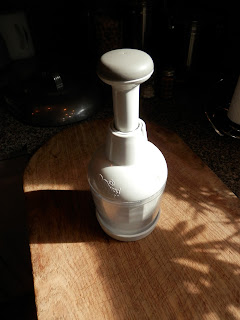 Kitchenaid is the best way to go on a veggie chopper.  I have owned others, but this one lasts longer and works better.  Go to www.kitchenaid.com for more info.

Fresh Onions from a farmers market.  That's the only way to go.  That's about two cups.  Use three cups if you love onions. 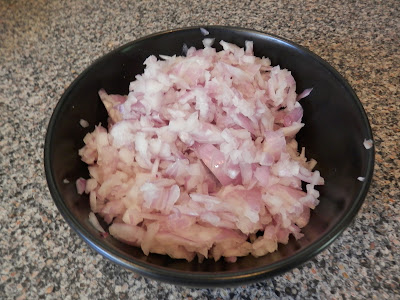 Garlic chopped with the same chopper.  Need only a 1/2 cup.  Wouldn't go more than a cup.  Smell the garlic after chopping.  If it is really strong, cut the portion unless you're a garlic lover.

Boston-Butt Pork or Picnic-Cut Pork, chopped into bite-size pieces.  Don't worry about the fat.  Most of it will be cooked out later.  Leaner pork loses its flavor in the cooking process.  This bowl holds about two pounds of pork. 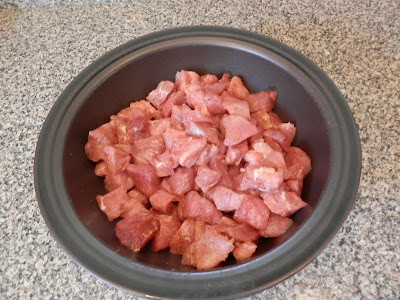 Boneless Chicken Thighs, chopped into bite-size pieces.  Try to get thighs with skin if possible.  This is about a pound and a half.  Again, most of the fat will be cooked off.  White meat loses it's flavor in the stewing. 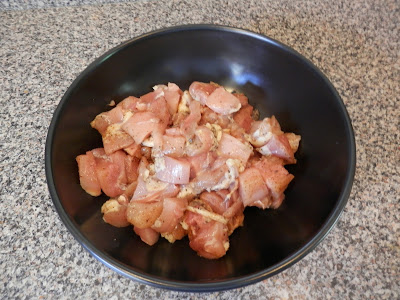 Andouille Sausage, also cut into bite-size pieces.  This is a seasoned smoked sausage which uses chunks of pork, rather than ground pork.  In Texas, I use the Cajun Hollar brand which is sold in the local HEB markets.  For more info about Cajun Hollar go to boudinlink.com.  Most any smoked sausage will do, but I prefer andouille when I can find it. 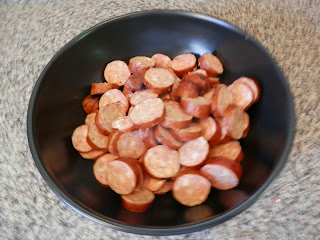 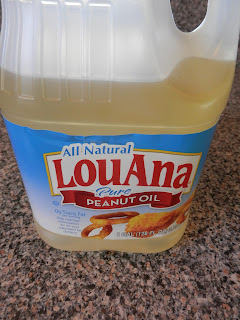 Tony Chachere's More Spice Creole Seasoning is what I am using in this dish.  There is a myriad of spices that go into a jambalaya, and Tony's has most of what you need already mixed in it.  And you can find Tony's just about anywhere in the USA.  More Spice has less salt that the original mix.  Season the meats before they are put in the pot. 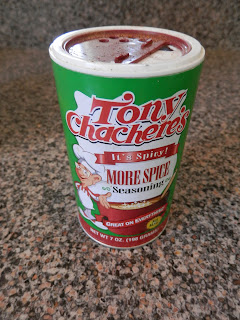 
Heat the Pot First on high and then adde the oil.  Thinly coat the bottom of the pot.  If all you have is non-stick, don't heat the pot first, rather add the oil and then heat the pot.  Pleeeease don't use non-stick to cook a jambalaya.  The masters of Gonzales use no oil, rather brown the meats in their own fat. 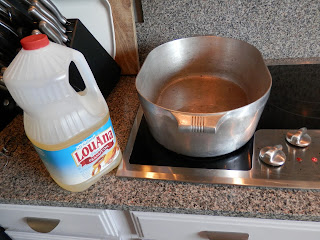 Brown the Meats one at a time.  Pieces of the meat will stick.  That is a good thing, trust me.  Scrape up what you can, but don't worry about what stays on the bottom.  Start with the fattier meats such as the sausage, brown and remove it before adding the next meat.  Remove all of the meat, before browning the veggies.  The masters from Gonzales will remove as much of the liquid animal fat as possible before adding the veggies. 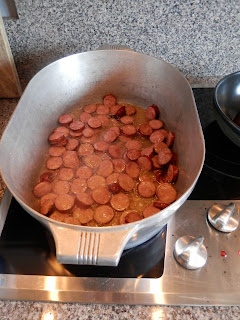 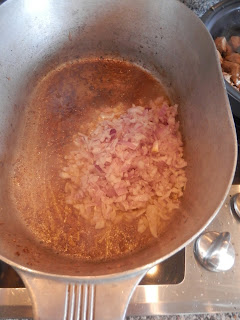 And Now the Water!  Add two cups of COLD water and use a wooden spatular (metal if you don't have wood) to remove the good stuff stuck to the bottom of the pot.  That's what gives color to the rice and flavors it in part.  Then add the rest of the water.  For an 8-quart pot, add a half-cup of water more than what the rice-recipe calls for.  For a 16-quart pot, add a cup of water more than the rice-recipe calls for.  This is a cooking tip I learned from the Gonzales masters. 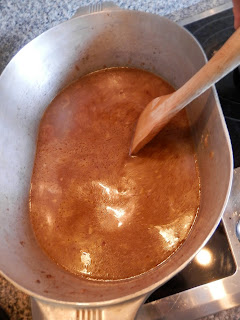 Season the Water.  Now add Tony's to the water to season the rice.  I think I add about four table spoons ... maybe five.  We have a standard unit of measurement in Louisiana which my family uses.  It's called "yay". 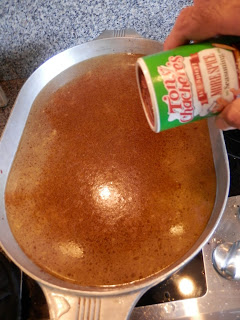 Bring the Mixture to a Rolling Boil.  This is the fat-removing stage.  You have to stand over the pot with a large cooking spoon.  See those white bubbles in the center.  That's animal fat.  Scoop that stuff out and put it in a metal pot or glass container.  The Gonzales masters just fling it on the ground.  That clear liquid around the edge is the oil I used to brown everything.  Gently scoop that stuff as well.  Be careful, some of the onions will try to escape.  Do this until all of the white bubbles are gone and almost all of the oil rim around the edge is gone.  If you skip this stage, your rice will come out sticky from the animal fat and oil. 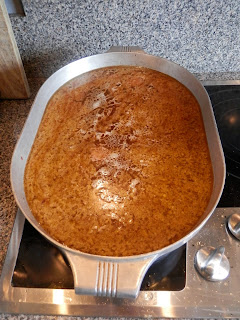 Animal Fat and Oil removed from the pot.  This is a cup of yucky stuff I pulled out of the pot.  In the process, probably a cup of water had evaporated.  That's why the extra water in the mixture. 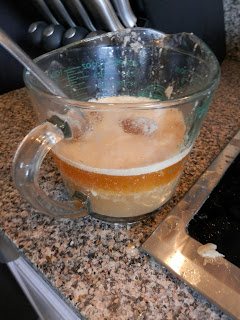 Finally, the Rice! After all of that, you can add the rice.  Bring the mixture to a boil again, stir once, close the lid, put the fire on simmer.  And say a prayer.  Don't peak inside to see how its going.  Don't!

To simmer the mixture, the masters from Gonzales just knock the wooden logs out from under the pot.  There's enough heat in the iron pot to cook the rice. 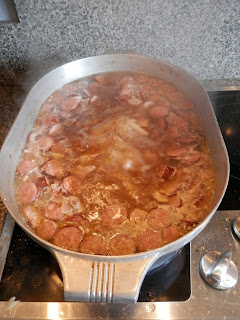 Remove Lid after 45 minutes of no peeking.  Carefully fold the rice over once mixing the sausage which gathered to the top with the rice on the bottom.  The cooked rice in a well-cooked massive black-iron pot of jambalaya in Gonzales will have the same consistency on the top as well as three feet down to the bottom. 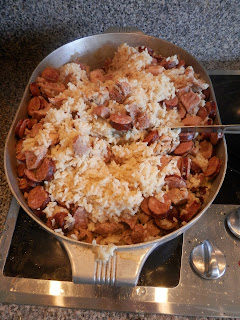 Jambalaya Festival:  Gonzales hosts an annual jambalaya festival where the best cooks around compete to see who can cook the best massive pot of jambalaya.  Their stuff is sold to the public after judging.  This is a cooking mecca that you should make once in your life.  The festival is held on Memorial Day weekend.  Gonzales is located off I-10 between New Orleans and Baton Rouge.  For more info, go to www.jambalayafestival.org.

Posted by Unknown at 9:35 AM No comments: