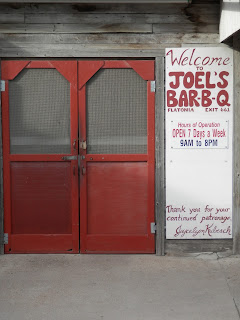 This place is a Texas FIND!  Great ribs and other barbecue.  Everything is lean but the sausage, and sausage is never lean ... that's what makes sausage good.

Joel's is located on the northern side of I-10 just east of Flatonia between Houston and San Antonio.  Take Exit 661.  This joint is open seven days a week til 8 p.m.  Meals generally run from $10 and up, but you get plenty of food for your money.  Thanks goes to my cousins Bob and Sharon for finding this place for me. 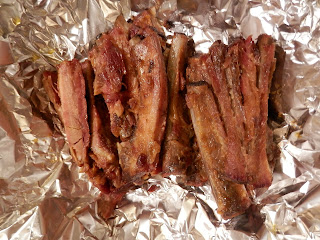 The ribs are the best reason for stopping here.  Eat them in or get them to go.  I did both.  My wife Vilma is particularly persnickety about her ribs, and she loved these.  Very little fat!  Plenty of meat.  Lightly smoked and seasoned.  You can taste the pork in the ribs.  Barbecue sauce is an option.  Joel's doesn't drown the ribs in sauce like some barbecue joints, but rather serves them naked with the sauce on the side. 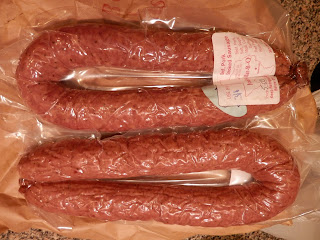 Got the sausage to go.  Joel's has regular and jalapeno sausage.  Got both.  I grilled the regular for Vilma and I.  Great stuff -- average fat content for sausage, enough for flavor, but not too greasy.  Saving the jalapeno for the guys. 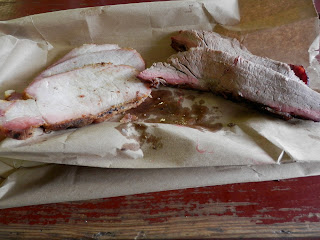 Pork loin on the left and brisket on the right.  The naturally lean pork is thoroughly cooked, but retains its natural juice.  It goes well with Joel's barbecue sauce which is slightly sweet.  The brisket is extremely lean for this cut of the cow and goes well with the sauce in which the beans are cooked. 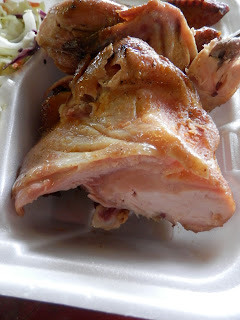 Chicken breast is smoked, but thoroughly cooked.  Joel's barbecues its chicken on two pits.  My guess the first go-around is for flavor and the second one to cook the chicken.  This method apparently results in chicken which is both cooked and juicy. 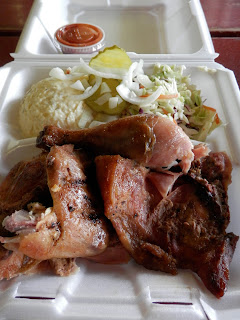 Barbecue chicken appears in the platter above served with potato salad and coleslaw.  The chicken is completely cooked but still moist in the inside.  Joel's gives you a half chicken with the one-meat platter and that's their best deal on this size plate.  Note the barbecue sauce on the side.  To use it is your choice at Joel's. 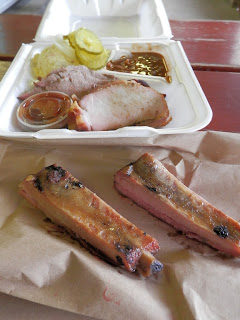 I recommend the three-meat platter for the big eater.  On my platter were two meaty pork ribs and a great serving of pork and brisket along with sides of beans and potato salad.  Note the container of barbecue sauce on the side.  Sauce at Joel's is a customer choice.  By the way, the beans and potato salad are great.  Other meat options include turkey and sausage.  And I am sure that I'm forgetting something.  For more info go to joelsbarbq.com.

Joel's serves food-to eat-in the same way they serve food-to-go.  That's why the styrofoam container, and most of the restaurant industry runs off styrofoam to-go containers.  The styrofoam industry needs to find a way to recycle their stuff. 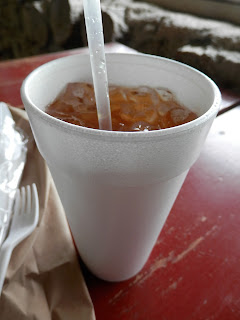 According to the Book of Rules, Texas barbecue joints must have great iced tea.  And Joel's is no exception.  Get the tea.  If you megasize your tea, then plan on a restroom break at a nearby rest stop.  There's one in each direction.  Look for the blue sign.

Posted by Unknown at 8:38 AM No comments: