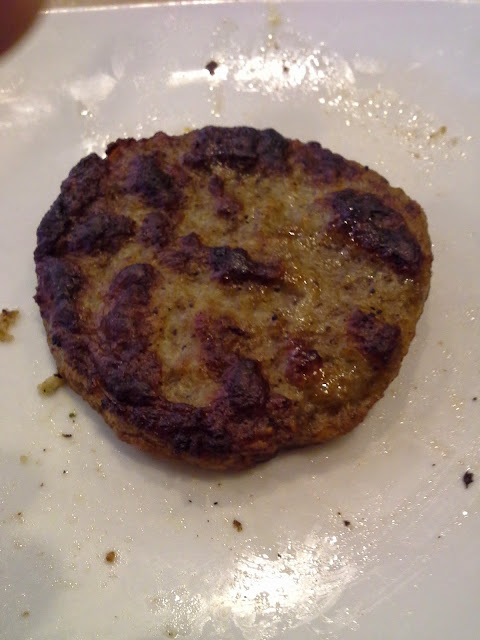 The sausage paddies here are homemade and have this wonderful pork taste to them.

The Egg & I has locations across the southwest, but the food does not taste like chain restaurant food.  So I am exercising my prerogative to do a post on a nationwide chain, a small one though.  This one is located on Sonterra Boulevard in San Antonio.  Just take the Sonterra exit off US-281 in north San Antonio, and head west.

The restaurant chain was started by Rayno and Patty Seaser in Colorado.  After spreading through much of Colorado with their great restaurants, The Seaser's moved into the rest of the southwest: Nevada, Utah, Arizona, New Mexico, and Texas.  I have only eaten at the three locations in San Antonio, and all three produced great breakfasts.  My guess is that the quality control extends to all of their locations.  Thanks to Rayno and Patty for such great egg dishes. 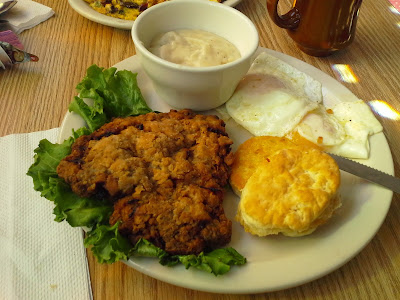 Great tasting chicken-fried steak comes with eggs and crisp biscuit.  The gravy is not the lily-white stuff that other restaurants serve.  There's a tint to the gravy which means to me that the flour is slightly browned before adding water (or milk). 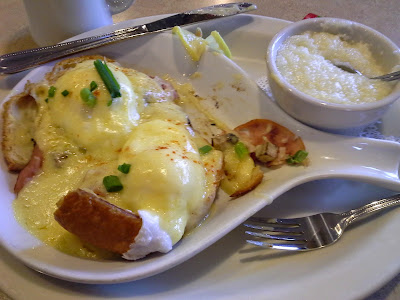 This traditional dish comes with two English muffins and poached eggs topped with a Hollandaise sauce.  But what is different with this plate is that it comes with smoked ham, and look how thick it's sliced.  They top the while dish with chipped green onions.  What's great about the Egg & I is that the servings are enough to fill the average eater, but not overfill.  The portions are perfect. 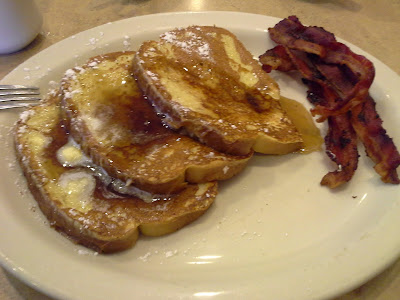 Egg-batter dipped sour-dough bread is dropped on a griddle and cooked until golden brown, then covered with powdered sugar.  I put the butter and syrup on after.  Yes, it comes with a meat option and two eggs. 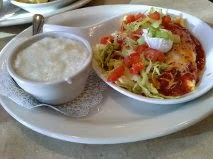 This place roasts the green poblano chiles and rolls them with jack and cheddar cheeses into an egg.  The whole dish is topped with pork green chili sauce, lettuce, tomatoes, sour cream, and green onions.  This is truly a tasty dish. 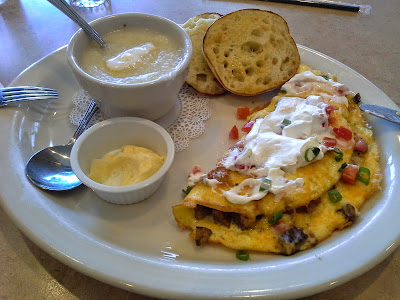 The Mexican omelet is one of a half dozen choices and is my favorite: chorizo sausage, chiles, and onions topped with cheese and salsa and folded in fried egg.  This dish is topped with sour cream and green onion.

Note: you see grits on a lot of plates.  This place makes the three-minute grits now. 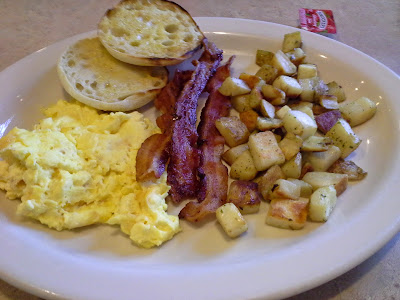 Here is their traditional egg plate.  It comes with a choice of meat, bread, and ranch potatoes or grits.  By the way, you can get turkey sausage here, but I just don't do pictures of it.

Posted by Unknown at 7:11 PM No comments: