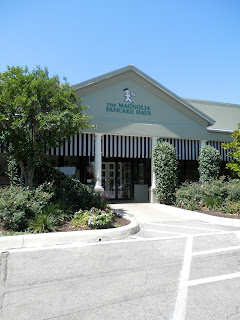 Elegant dining for roadside prices.  Guys, if you want to impress a girl, eat a lot of great food, and not spend much, this is the place to dine.

Their breakfast menu goes for three pages.  Talk about choices!  If you're local, this is the place to surf for breakfast.  Thanks goes to my friend Tom who helped me check out this place and to my wife's son Merto who first directed me to the Haus with a gift certificate.

One warning thought: this place is extremely popular on Saturday and Sunday.  If you don't like the weekend wait in the foyer, then get there at 7 a.m. when they open.  The nice aspect about retirement is that I get to go during the week.

The Magnolia is located off of US 281 in San Antonio.  Out of towners can get to 281 by I-10, 1-35, and I-410.  Once on 281, take the Bitters Road exit and go east until you get to a left-turn only road.  That is Embassy Row; turn there.  Embassy Row dead-ends into a circle.  Go right on the circle to Embassy Oak.  The restaurant is located on the left.  Look for a lot of cars and pickups (this is Texas). 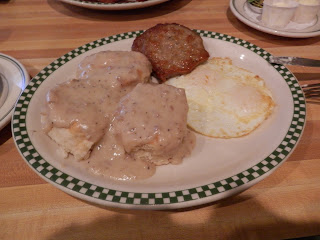 This is not just your lilly-white cream sausage gravy like in most places.  The Magnolia Cafe slightly browns the flour, adding an extra pizzazz to the taste.  This breakfast comes with two eggs to your liking and a choice of bacon, sausage, or ham.  For me, the meat choice is a low brainer -- more sausage to go with my biscuits and sausage gravy.  See how the sausage patty gleams.  I get this dish about every fourth visit to Magnolia. 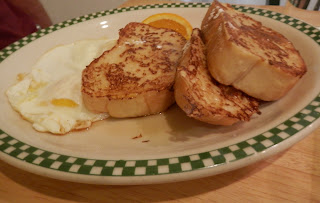 This German restaurant also knows how to cook French toast.  You can order the French toast with egg or by their lonesome.  The toast is made from hand-cut French bread and soaked in batter before being grilled to the golden brown as in the pic.  This stuff goes great with syrup. 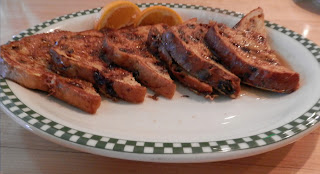 Here you have it, thick-cut Oregon Mills cinnamon-raisin bread.  It is dipped in egg batter before being grilled.  Yes, you have to have the syrup. 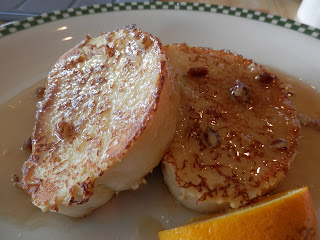 If you are a syrup lover, then don't get this.  The praline pecan French toast is a delicacy whose flavor will be overwhelmed by adding anything but butter.  It has a very light praline sauce which I suspect is made from sugar-n-the-raw heated with fresh pecans until it's clear.  This one is my favorite.  The breakfast comes in four slices, but I requested half praline and half banana's Foster. 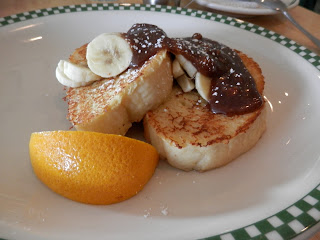 Here's the other half of my breakfast.  Look at that rich dark brown-sugar/butter sauce with the bananas on the side.  A tasty topping for French toast.  The only thing that would have made this dish better would have been sautéing the bananas in the sauce (that's the way they do it in New Orleans).  And please don't trash this awesome sauce with syrup. 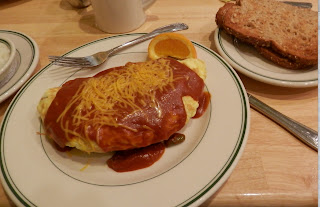 Magnolia has outstanding omelets and I know because the menu says so.  Also, I've eaten several including my favorite, the Hawg & Hen.  Three fluffy eggs with cheddar and custom pork sausage folded inside.  But that's not where it ends: the omelet is topped with a thick tasty Creole sauce.  Yes, this German restaurant knows how to cook Creole as well. 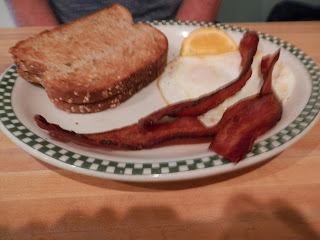 Two eggs any style with choice of breakfast meat and pancakes or toast.  Magnolia only uses apple-wood smoked slab bacon.  For me, it is always cooked perfectly. 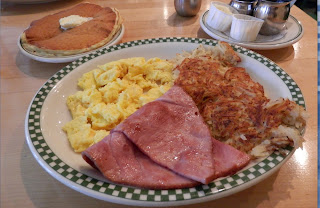 If you're a big eater, order the Magnolia Breakfast which includes three eggs with their own Magnolia Browns and choice of breakfast meat.  Above, I ordered the grilled hickory-cured and smoked pit ham, one of their four speciality meats.  Like the menu says, the ham is sweet and slightly salty.  Their Magnolia Browns are well cooked on both sides and seasoned with garlic and onions.  Not too many places season their hash browns let alone cook them on both sides. 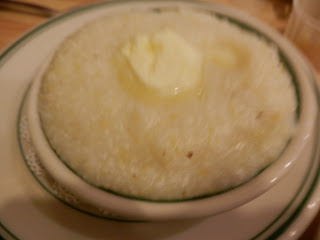 Most places in Texas can't or won't cook grits, but Magnolia Pancake Haus can and does.  Look how thick, yet smooth.  That's the way grits should be made.  I like what I call barbarian grits ... that's where you dump the bowl of grits on 2-3 soft-yolk eggs and mix them together.  Great taste, but guys, don't do this if your trying to impress a girl! 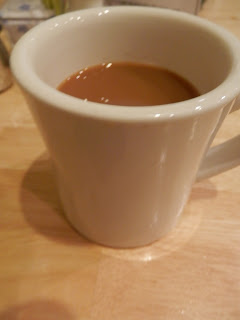 Their coffee has both great body and great taste.  Thick but not bitter, the coffee has such a smooth taste that one could just stop for coffee ... but don't!  Get breakfast as well.

For a complete menu and more information, go to  www.magnoliapancakehaus.com.

In a later blog, I'll show you how to make Bananas Foster and other sweet sauces at home.  These sauces are great on ice cream, French toast, and cheese cake.