Main Street is the traditional business east-west thoroughfare in Springfield.  Its run from downtown to the fringe of the city is less than 4 miles, but Main is home to NINE locally-owned restaurants which offer scrumpious country breakfasts.  These nine places do not include the bars, lounges, Mexican restaurant, delies, and hamburger joint which offer breakfast as well.

This post will focus on these nine restaurants.  Now, to understand where they're located, you have to know that part of Main Street is split with a block of buildings in between.  The founding fathers in a senior moment named one direction of Main as South A Street.  Nah!  That's still Mainstreet, just going the otherway.  So Addi's is included in my count as well as Steve's which is on a street between East and West Main.

The citizens of Springfield have to be some of the luckiest breakfasteers in the nation.  I don't know of any other place in the country with this concentration of great mom-n-pop country breakfast places, and the locals seem to know that because all of these outlets host a crowd of regulars. 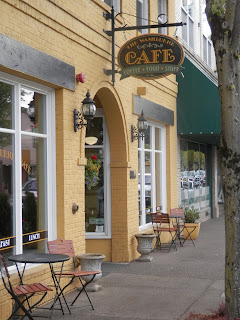 Washburne is a cozy coffee shop offering a lighter fare than its Main Street cousins.  It's a place where one can go to relax, read a book, surf the internet (free WiFi), or just have a quiet conversation with your main squeeze.  For coffee, I had both the house blend and the French roast.  Both had a bold taste ... the kind of coffee one wants to add raw sugar to.  Yes, all of you English teachers out there, I end my sentences in prepositions.

Two of their heavier breakfast choices are the meat omelet and the biscuits and country (sausage) gravy.  Below is the meat omelet with bacon, ham, and cheddar.  The crisp bacon and melted cheddar define this tasty breakfast.  It's served with sauteed new potatoes with the skins (Yes!) and a crispy slice of wheat toast which was buttered and slow cooked in a sandwich press.  See that big juicy strawberry.  Chew on that to end your breakfast at the Washburne. 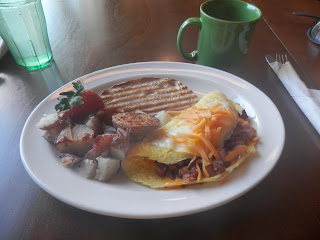 For more information go to www.thewashburnecafe.com 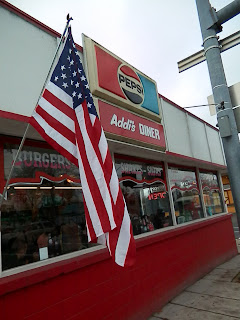 Addi's is home to the giant pancake.  Pictured above is my grandson's breakfast and that looks like a small one.  Their giant pancake varies in size and nobody complains because there always seem to be leftovers.  One of them had to be almost 18 inches diameter.  Man, that's family size.  How do they flip it?  My guess is that most of them are two forks wide. 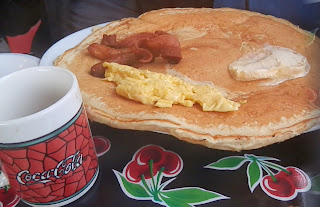 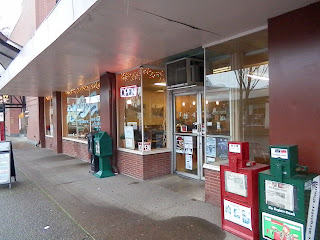 All of the food is great at Terese's, but my favorite is the Hungry Man Plate, three eggs and a choice of either 6 bacon strips, 6 sausage links, 2 sausage paddies, or other great meats.  Combo of link and paddy sausage was my choice.  Something about the paddy sausage on Main Street.  All of the restaurants have great pork paddies.  See the paddy glimmering in the pic.  You health food lovers, try the oatmeal instead.  I tasted my son's and it was great.  However, healthy food does merit a photo on my blog.  Don't tell anyone that I tasted the oatmeal; I don't want it to get out.  Look at all of the hashbrowns they heaped on. 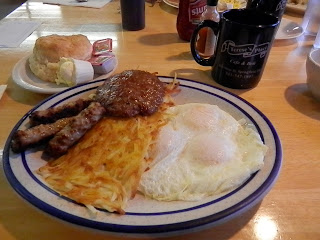 For more info and the menu go to their web page at www.teresesplace.com . 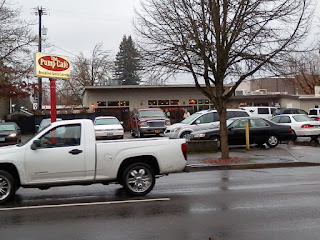 On my first visit to the Pump, there was a short guy dressed up as a Leprechaun.  Turned out to be St. Patrick's Day and the place was celebrating.  My guess was this place is Irish so I went with the corned beef hash and eggs.  That turned out to be a good decision.  Thank you, Leprechaun customer. 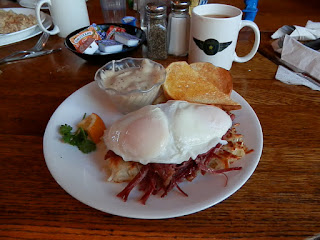 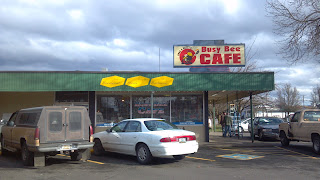 Busy Bee's has this great mom-n-pop look to it.  My favorite place there for breakfast is at the counter and my favorite breakfast is their biscuits and sausage gravy.  Can hardly see the biscuits for all the gravy that's been heaped on it.  And the gravy has plenty of sausage floating in it.  Pictured below is the  two-biscuit plate.  If you're not too hungry, Busy Bee serves a one-biscuit plate as well. 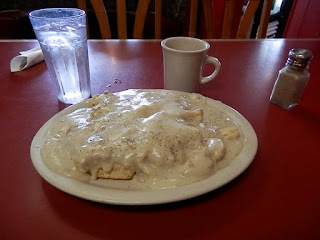 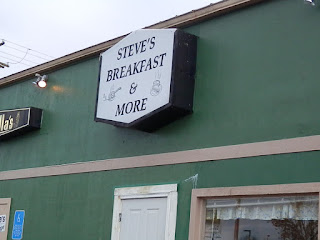 Steve's speciality is their giant biscuit.  Look at it next to the sugar dispenser (that's my standard unit of diner portion measurement).  Their biscuits are so popular that they generally sell out every day which means that you can expect freshly baked biscuits every morning.  Their biscuits are a great accompaniment with any breakfast, but I recommend getting them fully loaded when eating them solo (that's with just about everything in their kitchen piled on it). 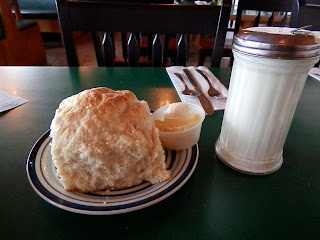 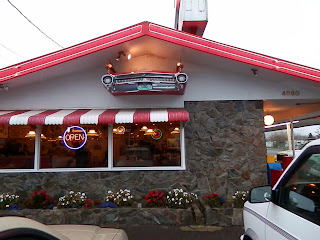 The tail fins on the exterior wall portray their trademark and their signature side dish in my opinion is the potato medallion.  The potato is sliced into thin circles and fried to a crisp.  Great with ketchup.  Both the bacon and thick link sausage are wonderful. 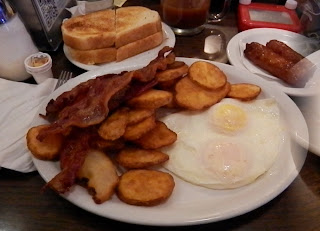 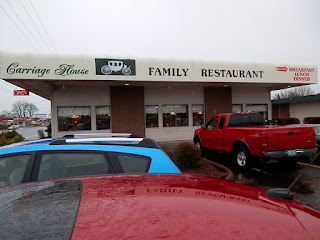 This is the new place on the block.  They recently took over from the previous owners and have been in business less than a year.  The scrumptious dish below is their Country Benedict, but I call it Eggs Benedict Arnold.  It's their derivation from Eggs Benedict: poached egg on sausage paddy and an English muffin covered with country gravy served below with a bed of hash browns in between. 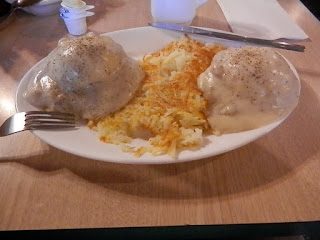 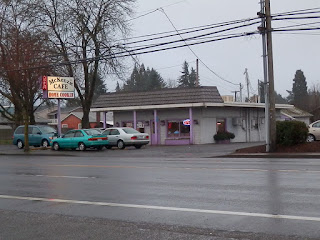 Mackenzie's is apparently the oldest restaurant building on the strip though the owners swapped out in 1979.  It appears to have a great menu selection, but I generally get seduced by the specials.  Here was my favorite specials: French Quarters, quartered French toast stuffed with cream cheese and some really tasty strawberry goo both inside and out.  This is a dish meant to be eaten in small bites and chewed slowly.  Savor each taste and then worry about going to the gym tomorrow. 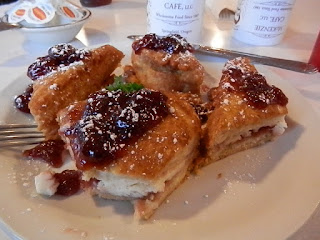 Bacon in most all Oregon restaurants has been and remains awesome.  The people of Oregon were eating applewood smoked bacon before the rest of the country, perhaps Washington State being the exception.  Any mom-n-pop or local chain in Oregon would have trouble competing with bacon generally found in restaurants elsewhere in this country.  Though not all local places serve applewood s bacon, most all Oregon restaurants serve great bacon.  My guess is that good bacon is not good enough for the Oregonians; it has to be great.

Anything healthy to eat on Main Street?

Give me a break!  This is Oregon ... probably the organic food consumption capitol of the country. Tree huggers paradise!  Yeah, all of these places on Main Street have healthy alternatives.  I just don't take pictures of them.
Posted by Unknown at 5:44 PM No comments: