The Cooler of Eugene Oregon 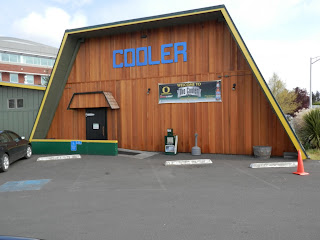 For more info go to www.thecoolerbar.com. 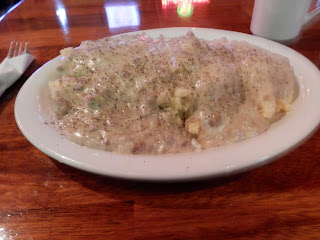 Most places, biscuits and sausage gravy is a small breakfast, but not here.  The stuff covers the plate and is reserved for the big eater.  See all that black pepper ... I put it there. 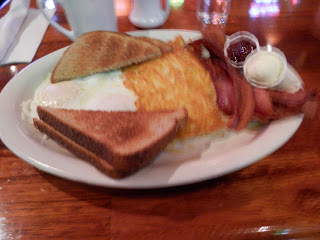 The grill at the Cooler must stay hot.  Look how crisp the bacon and the hashbrowns are.  The eggs on a hot grill cook thoroughly.  I can't say enough about the bacon in Oregon.  Just about anywhere you go (except national chains) you will find great bacon in Oregon ... thick, meaty, tasty, and well cooked. Most everywhere, it's apple-wood smoked.  Thank you, Johnny Appleseed! 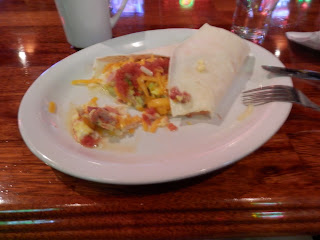 Above is their breakfast burrito, the Autzen, loaded with ham, bacon, sausage and onion, along with both cheddar and jack cheese.  Yes, that's salsa inside of the wrap.  They make a veggie one, but I didn't take a photo of it. 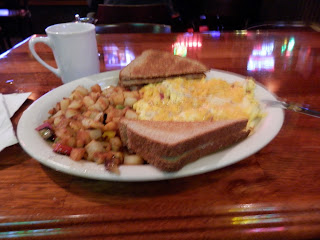 The Cowboy Scramble has ham, bacon, sausage with both cheddar and jack cheese.  This time the side was home fries which are great here.  The Cooler also makes a scramble which they call the Dump which includes three eggs with  jalapenos, bell pepper, onions, tomatoes, bacon, jack-n-cheddar cheese, all dumped on a bed of their crisp hash browns.

The Cooler's breakfast menu has changed over the past two years.  No longer on the menu are the great pancakes and the perfectly-cooked yellow grits.  I imagine they lost their grits cook and I suspect there are very few competent southern grits cooks in Eugene.

Email ThisBlogThis!Share to TwitterShare to FacebookShare to Pinterest
Labels: breakfast, The Cooler of Eugene OR