House of Seafood of Bush Louisiana 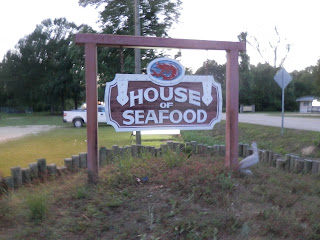 Today, I'm not the breakfast bro, but rather the bro of buffets.  Here is the mother of all seafood buffets.  Thanks to my brother Joe for finding this place for me.  Come to the House of Seafood with an appetite.  The cost for the SEAFOOD buffet is reasonable: 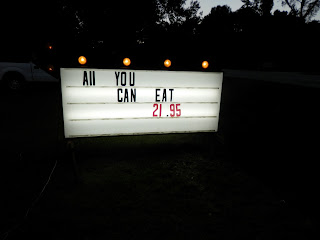 The place is located in Bush, Louisiana, which is somewhere north of Covington and south of Bogalusa.  Talk about the boomies, but it's worth the drive.  Just take LA-21 until you get there.  South from Bogalusa, the House of Seafood is located just after 21 turns right and goes from four lanes to two.  It will be on the left.  Coming north from Covington, the restaurant will be on the right.  If the two-lane highway you're on goes left to four lanes, you went too far. 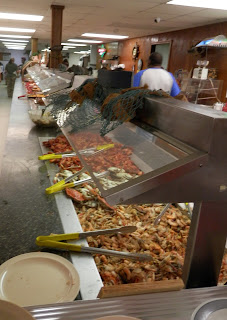 This is what you get for $21.95, almost a city block of food!  And that doesn't include the salad bar, veggie bar, or desert bar.  Don't worry, I took a photo of the desert bar. 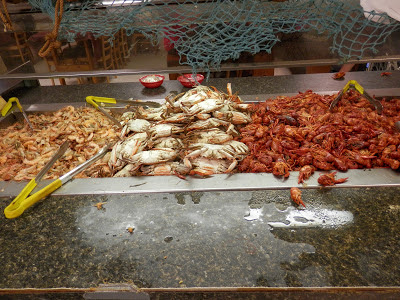 Shrimp, Crabs, and Crawfish galore!  The crabs are in season and are great.  They are heavy to the lift. The legs pull off with the lump crabmeat still connected.  For the shrimp and crawfish, make a sauce to spice them up before eating.

Oysters on the Half Shell: 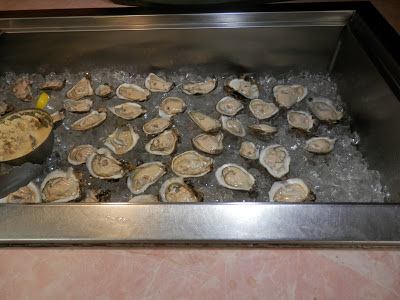 Oysters on the half shell, that's industry's way of saying raw oysters.  And these are big for a month without an "R".  Those that don't know, in the old days, you only ate oysters in months from SeptembeR to MaRch.  These look good, really good. 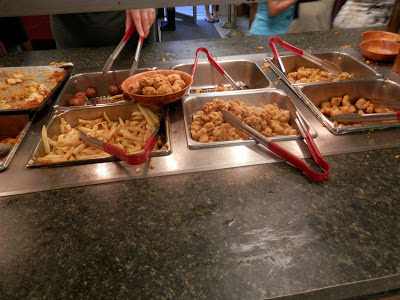 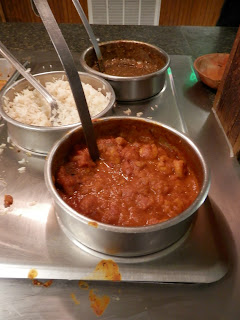 The red stuff is shrimp creole, a New Orleans favorite.  the brown stuff in the back is the seafood gumbo, a Louisiana diet mainstay. 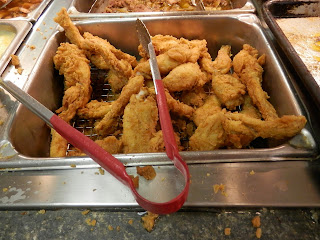 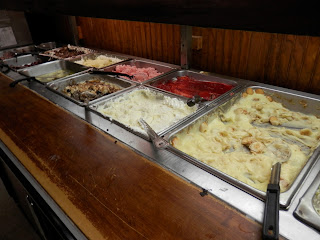 That's only part of the desert bar.  The best stuff on the bar in my opinion are two dishes: the bread pudding and the peach cobbler.  But there are a couple of chocolate dishes for the decadent. 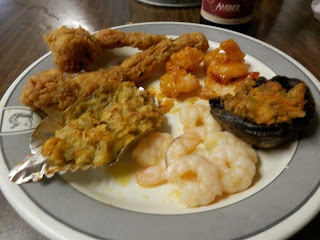 Here is a closeup of my second of four plates.  Plate #1 was the seafood platter.  The plate in the photo has all of the fancy dishes I wanted to try: shrimp scampi, stuffed crab, frog legs, some spicy oriental shrimp, and seafood-stuffed mushroom; that's right the black thing is a huge mushroom.  Plate #3 was a sampling of boiled seafood.  And the final plate was desert.

If my wife or internist is reading this post, I lied ... it was only one plate and no desert.
Posted by Unknown at 8:16 AM

Email ThisBlogThis!Share to TwitterShare to FacebookShare to Pinterest
Labels: buffet, House of Seafood of Bush Louisiana