Road-trip restaurants are often a crap-shoot, but not so on my trip from Texas to Oregon.  Here are some of the places I visited with my son Adam on the way there ... and where I will visit if I'm ever back that way.

Not sure of what exit to take, but Chaffin's is located on Broadway Blvd north of I-10 in Tucson.  The one and only dish I ordered there was great.  The place is open for breakfast and lunch, and closes about 3 p.m.  I ate breakfast and drove to Tombstone after, but was unable to get back in time for lunch.  Many regrets because they had a half-pound Angus burger as their lunch special. 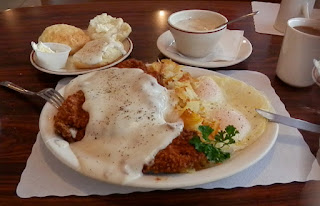 Here is a great chicken-fried steak and eggs.  Breading on steak was tasty and the steak fried to a crisp perfection.  Hash browns were also crisp ... on both sides (not all restaurants cook them that way).  Biscuits were fluffy, but not doughy, and came with extra cream gravy.  The next time that I'm passing through I will stop again and surf the menu.

For more information, go to www.chaffinsdiner.com 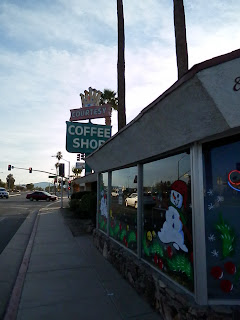 The Courtesy Coffee Shop is located off I-10 in Blythe, California, just west of the Arizona boarder.  This is one of the cleanest towns that I have ever visited. 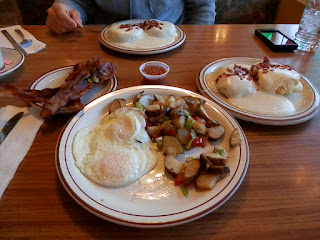 At the Courtesy Coffee Shop, they not only do food well, they also do it differently.  Their biscuits and gravy are topped with crisp bacon instead of sausage.  Their home fries are sautéed with red and green bell peppers.  This place was a wonderful change in pace from the regular breakfast routine. 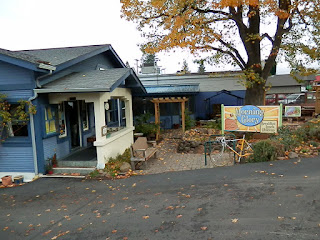 The Morning Glory Restaurant is located off of I-5 on O-99 in a sleepy college town, (Ashland, Oregon) just north of the California Boarder.  There is a hippie ambiance about the place.  The to-go boxes are cardboard, not styrofoam, which is always a plus in my camp. 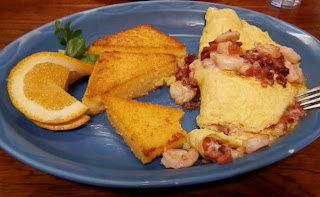 Above is their rock shrimp, bacon, and pepperjack cheese omelet with a side of fried corn polento.  This was a scrumptious surprise combination for me for an omelet.  Never would have thought to put shrimp and bacon together.   The corn stuff was a great change from the biscuit/toast routine. 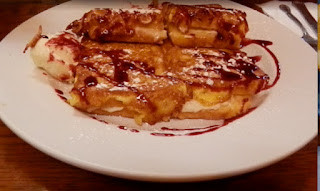 Here is their lemon-ricotta stuffed French toast with a raspberry syrup topping.  What else can I say....

Yes, they have tofu ... but not on my blog.  For more information go to morninggloryrestaurant.com 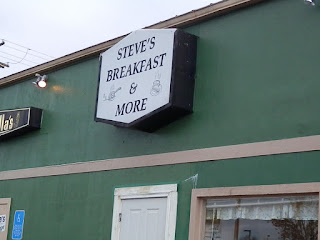 Steve's is located on Main Street in Springfield, Oregon, near I-5.  Steve's specializes in its trumongous biscuits which are made fresh daily.  Not every restaurant in the Springfield-Eugene area can boast daily-baked biscuits.  But Steve's has to bake them daily or they will run out of biscuits.  And some days they do run out.  (For all of you English sticklers out there, trumongous means very big) 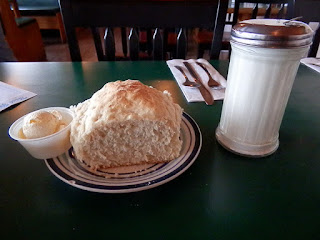 Here is one of their naked biscuits next to the standard unit of measurement in a diner, the glass sugar dispenser.  Oregon biscuits tend to be more dense and cake like than the fluffy southern counterparts.  I like both. 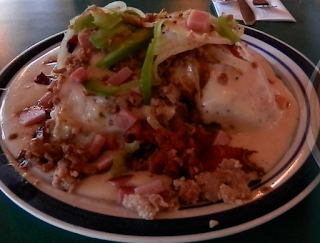 And I love their biscuit with everything in the world on top of it: sausage gravy, sausage, bacon, ham, purple onions, red and green bell pepper, and whatever else.  This is a meal in itself.  Share or you will need a to-go box.
Posted by Unknown at 7:18 AM