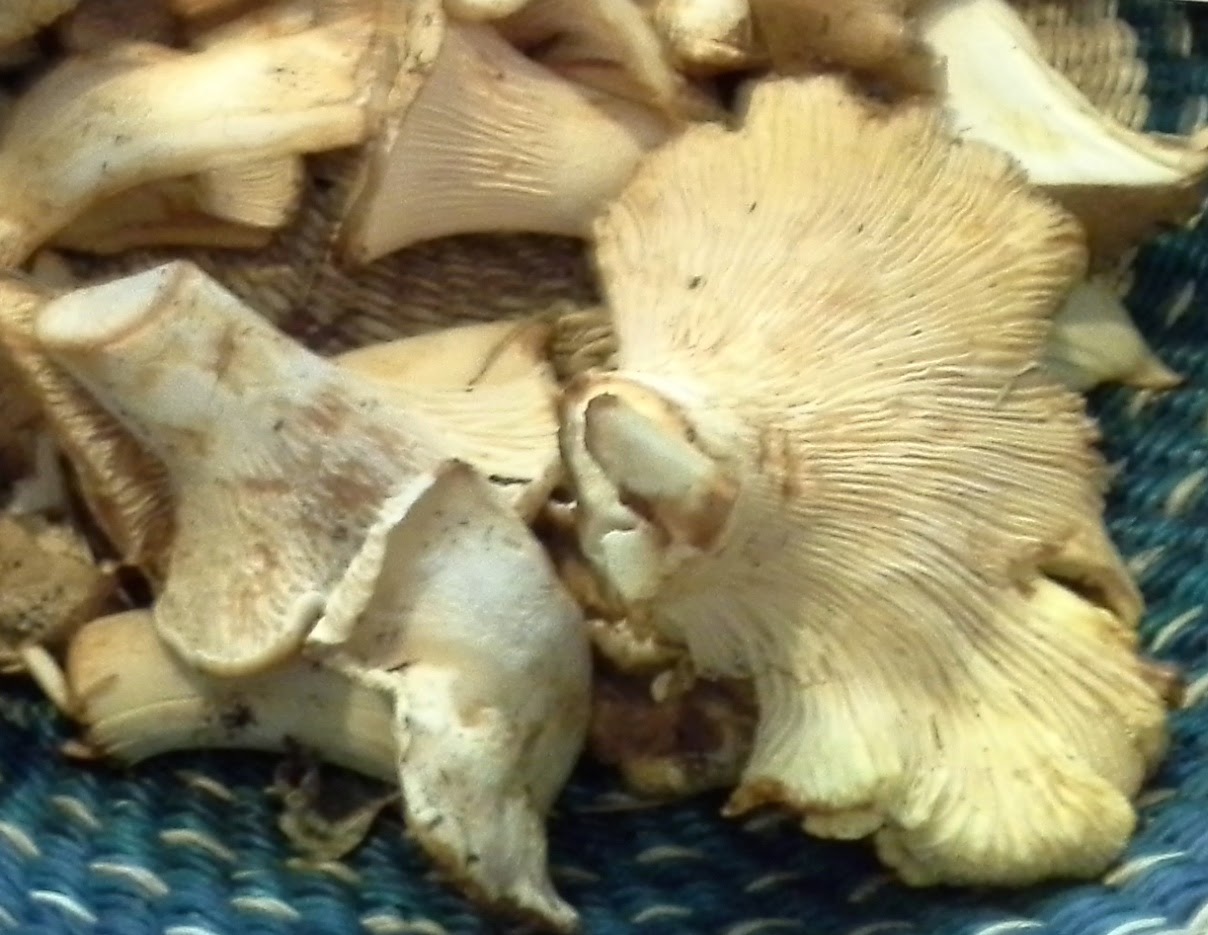 American Chanterelle can grow up to 15 inches wide, particularly in the Great Northwest.  These mushrooms were picked out of a National Forrest in Oregon.

The Feds require all forages to obtain a permit to pick mushrooms from the forrest.  All mushrooms must be split so that the m'room game warden knows that you don't intend to sell them to a restaurant.

The bag limit is two gallons.  Wished I could have hit that limit.  My son Adam took me to forage for mushrooms and between the two of us, we hauled only a small basketful ... hardly a gallon.  Adam said the pickens would be better after a rain.


Chanterelle in the Ground: 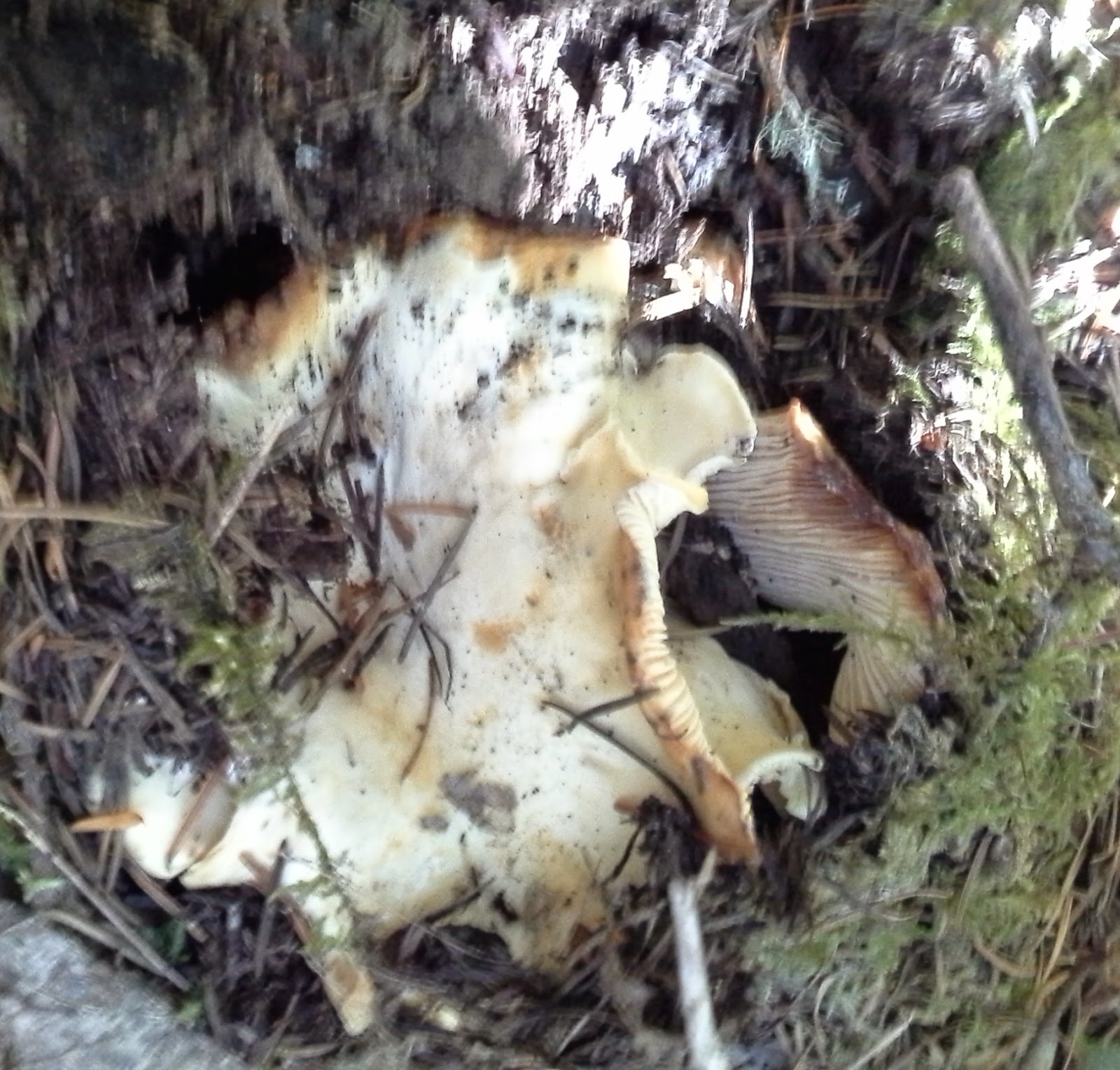 Lucky for me that I had lived on five acres for the past twenty years where the deer, rabbits, and my dogs roamed.  So I automatically look before I step.  Because of that, my eyes adjusted quickly to spotting mushrooms.  I even found three poisonous ones. 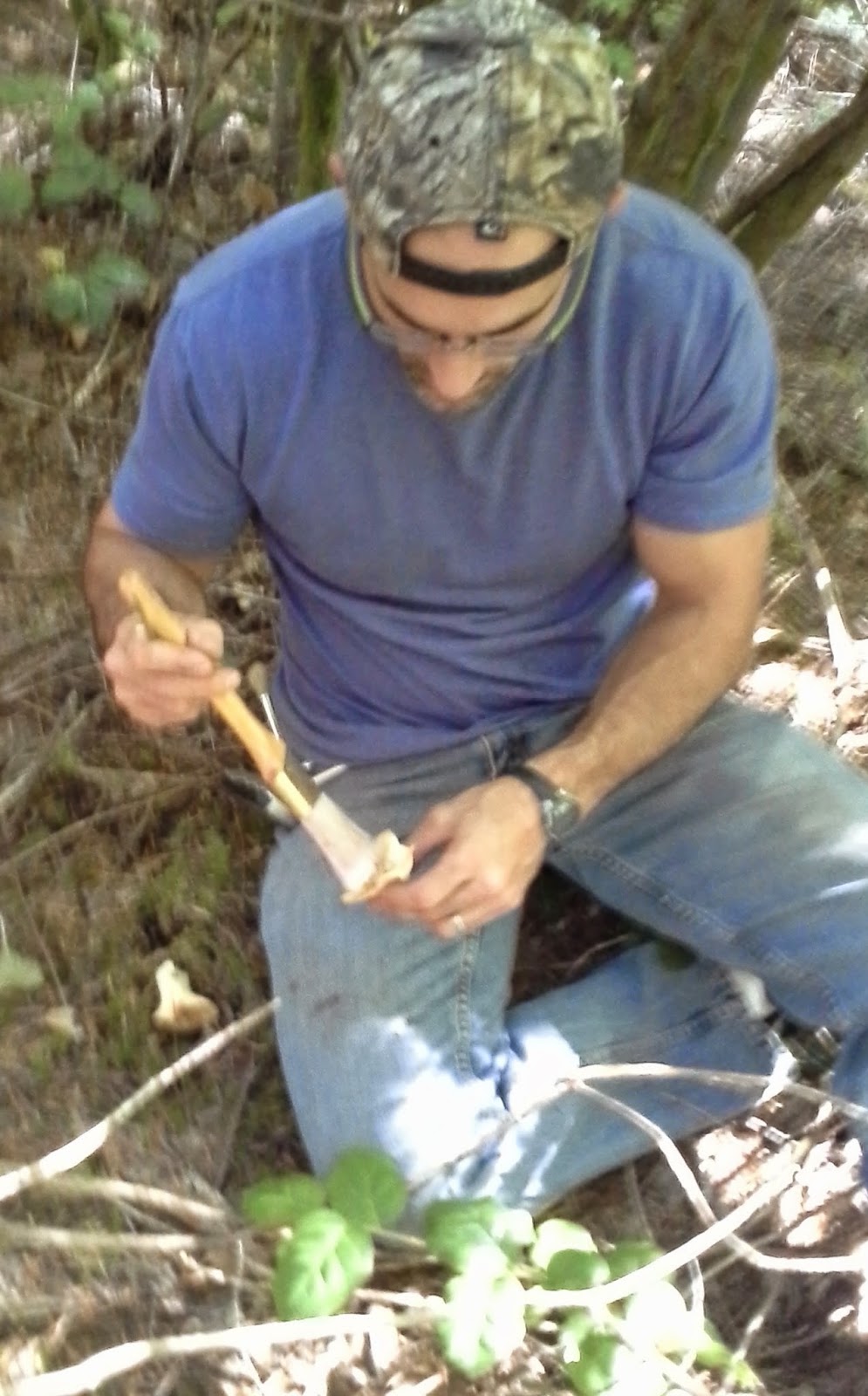 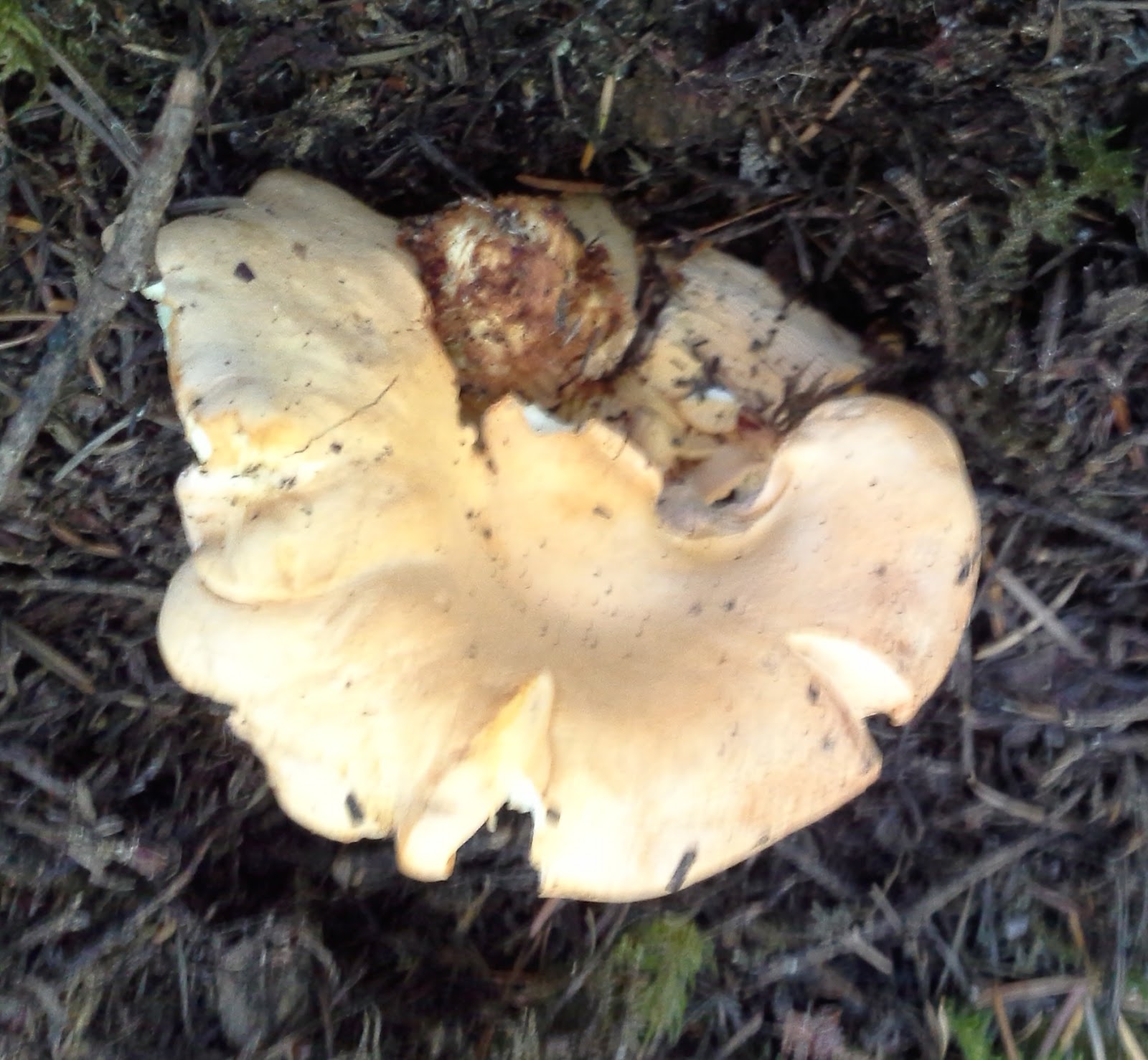 Trust me, Chanterelles are not that easy to spot when standing.  Often, all that I spotted was an edge sticking out of the ground cover.  And mushrooms like hiding in the moist darkness of ground cover until a heavy rain comes.


Pretty Mushroom, But No Longer Any Good

According to my guide (Adam), when the mushrooms turn darker, they are no longer any good for eating. 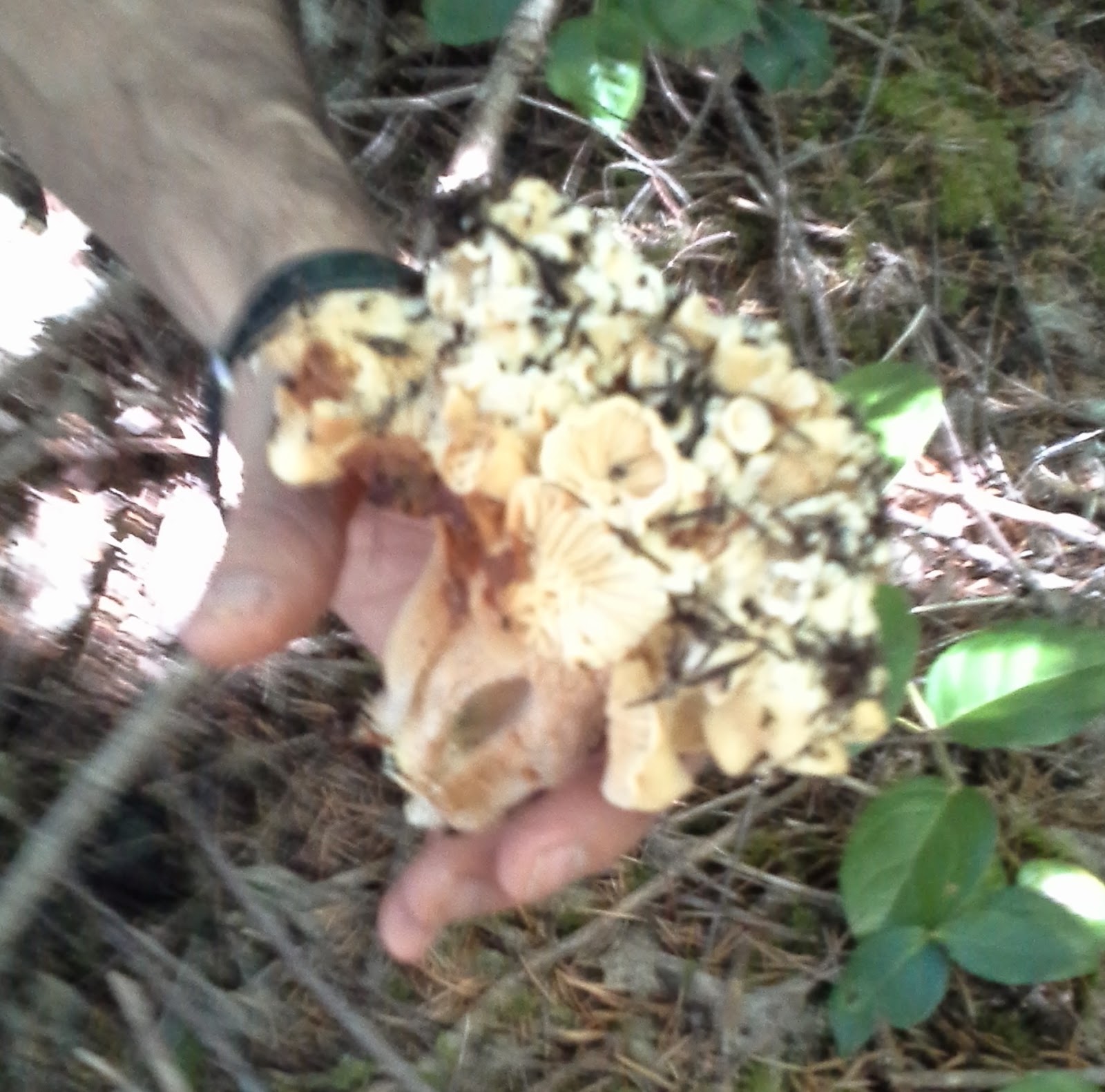 Here's a pretty bouquet of Chanterelles, but the bunch is already soft and likewise is no longer any good for eating. 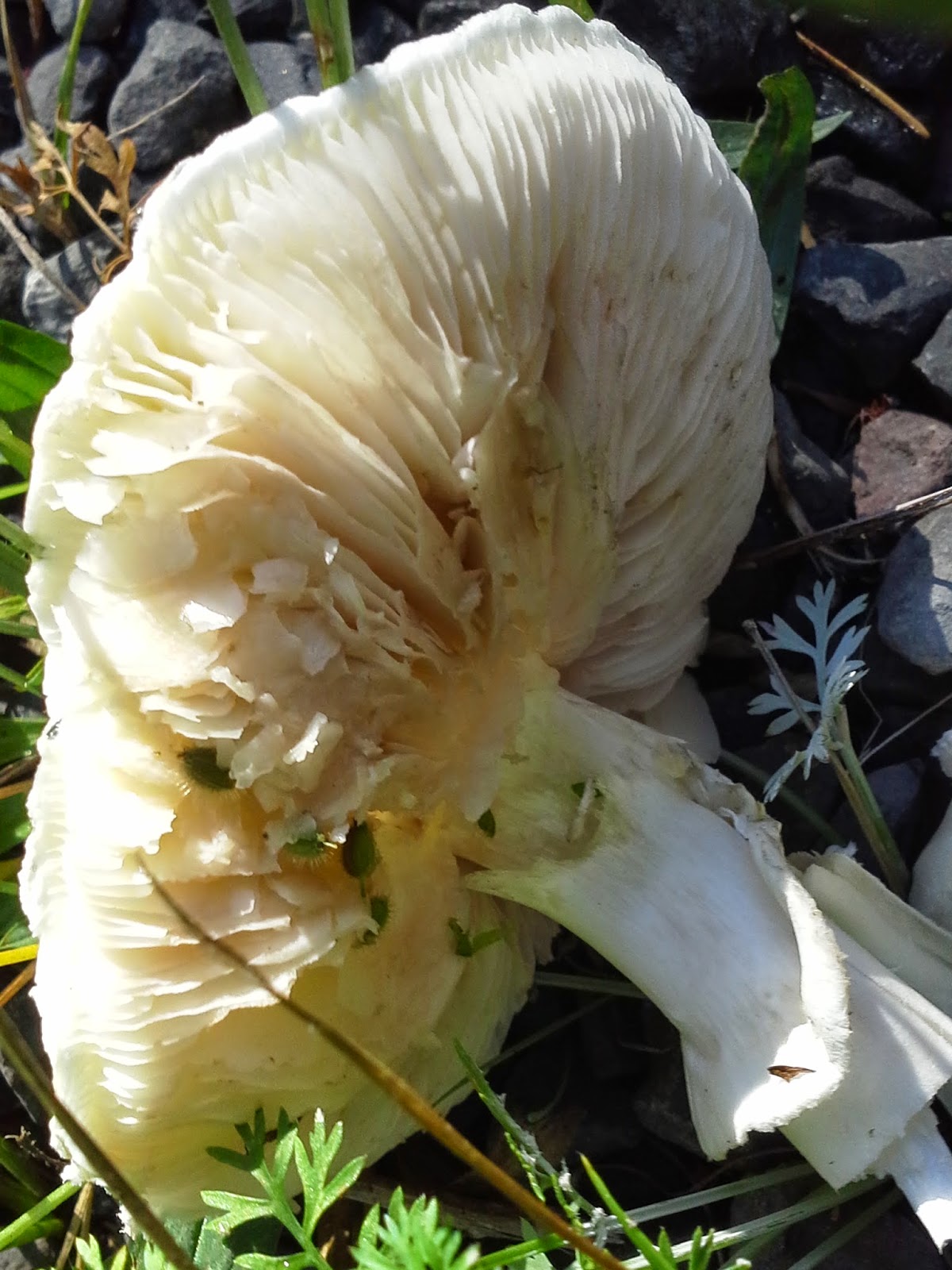 See the well developed gills on the underside of this mushroom.  According to Adam, where the gills are that developed, that species of mushrooms are poison and are only served to Clint Eastwood in Confederate garb.  Adam must be right about those being poisonous because we didn't get sick off the good mushrooms that we later ate. 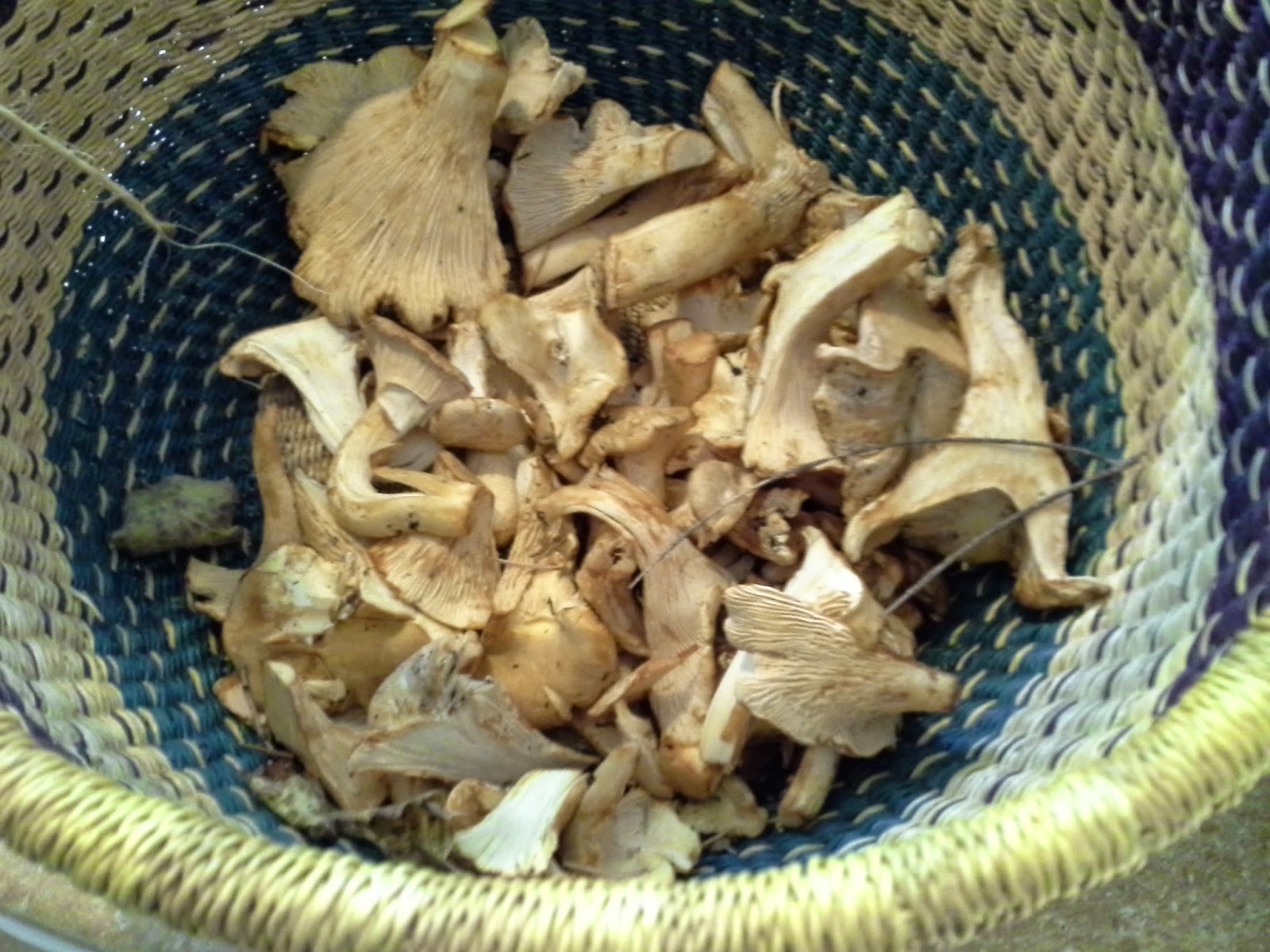 That was our take for an afternoon of stalking wild mushrooms.  If we hadn't forgotten our mushroom call, we would have probably had a better haul.  But it was enough to put into a stew.  Yes, we rinsed them off when we returned home. 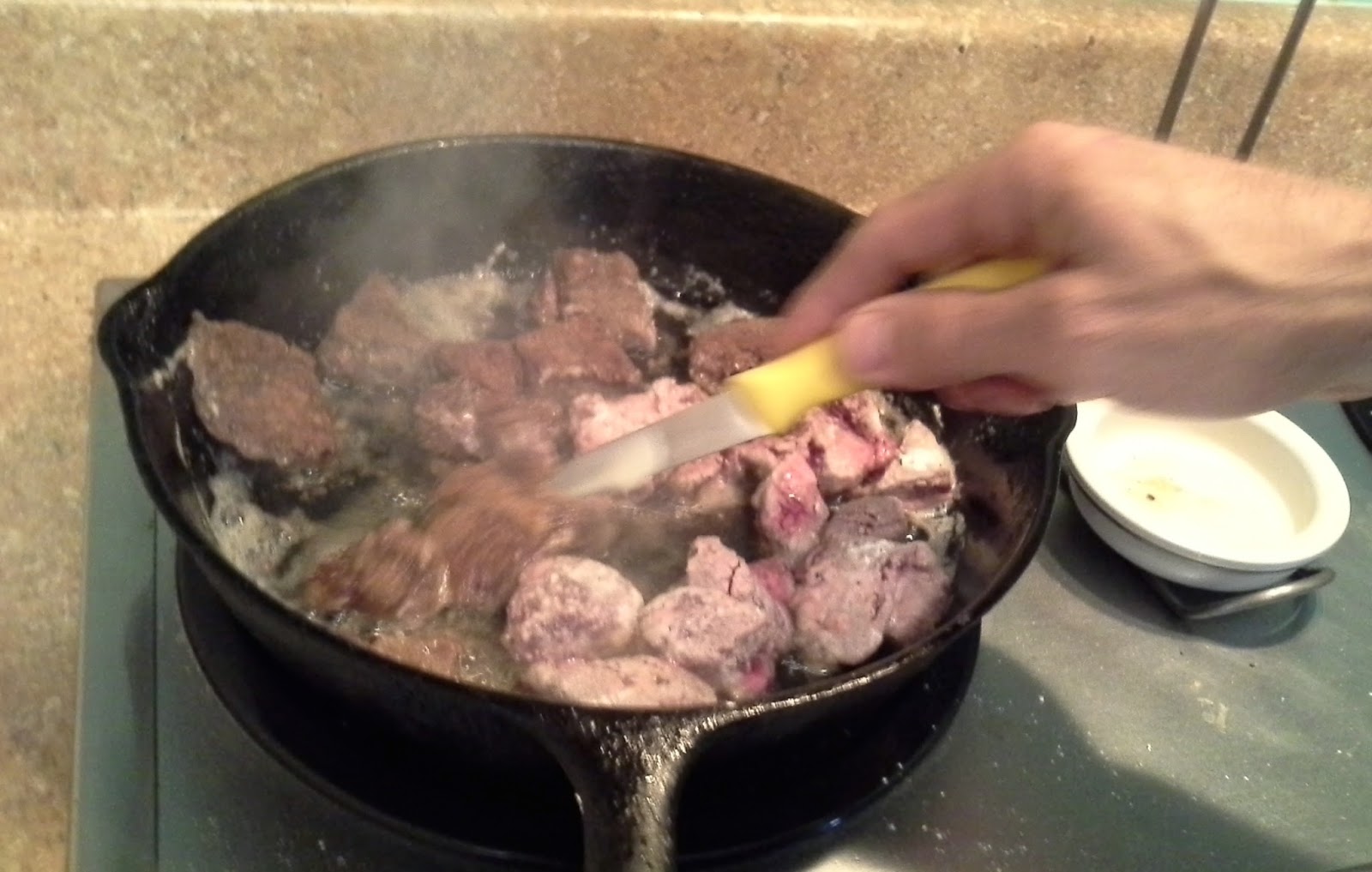 Chop up one-half a garlic and one yellow onion.  Sauté onions till clear, then add garlic.  Afterwards add seasoned/floured meat.  Once the meat is browned, add the mushrooms.  Then move to a larger pot for stewing. 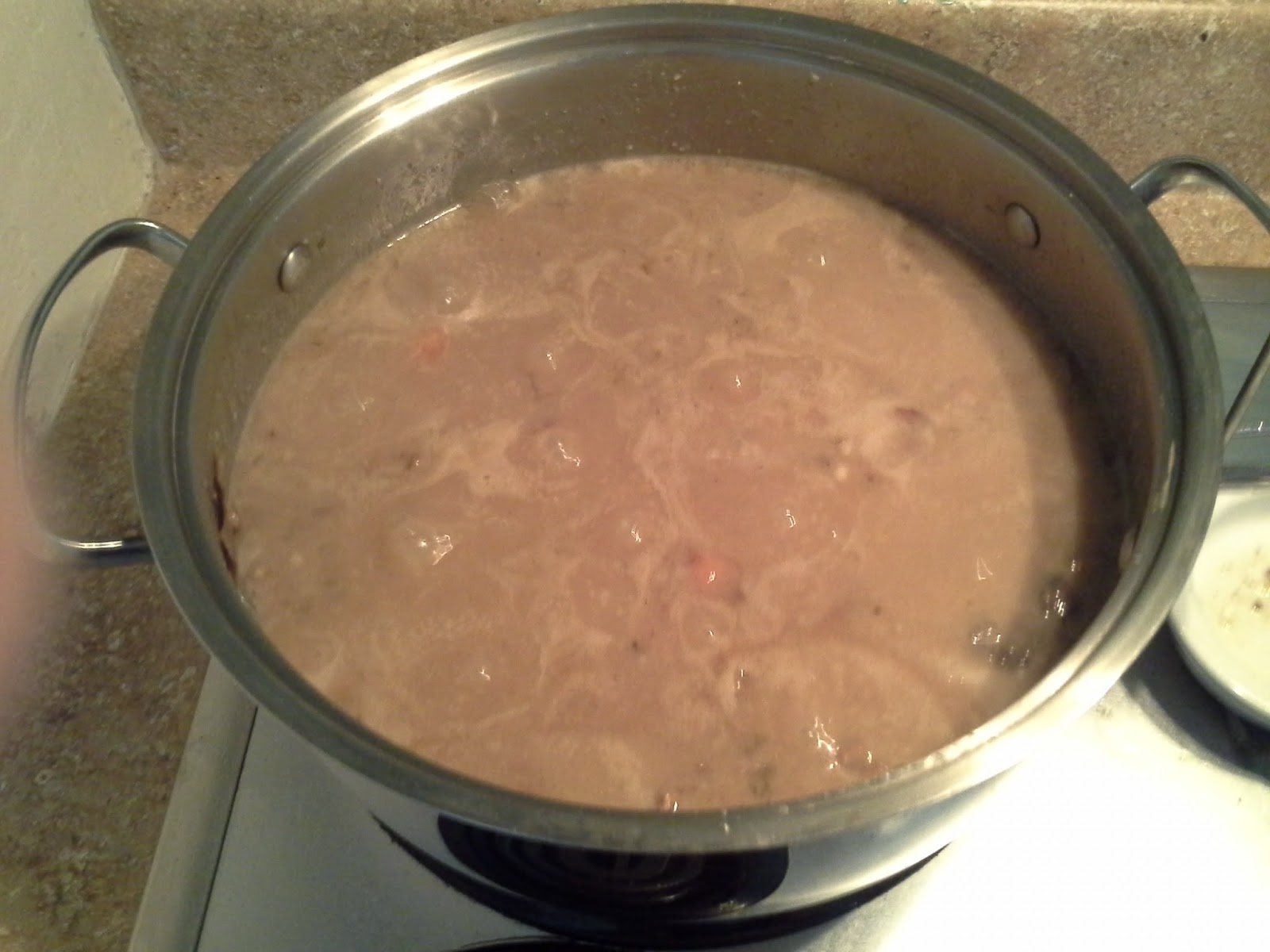 Add carrots and a beef bullion cube.  (Carrots always make stews better.  My daughter-in-law Dani says it's the releasing of the sugars in the carrots that enhance the flavor.)  Bring the stew to a boil.  Note: Adam's secret ingredient is rosemary fresh from his garden, and just add a dash.  The rosemary gives the stew an added dimension to the flavor.  Near the end of the cooking, my son added a small can of cream of mushroom soup to thicken the sauce.  The die-hard home chefs out there can substitute the mushroom soup with a heavy cream sauce. 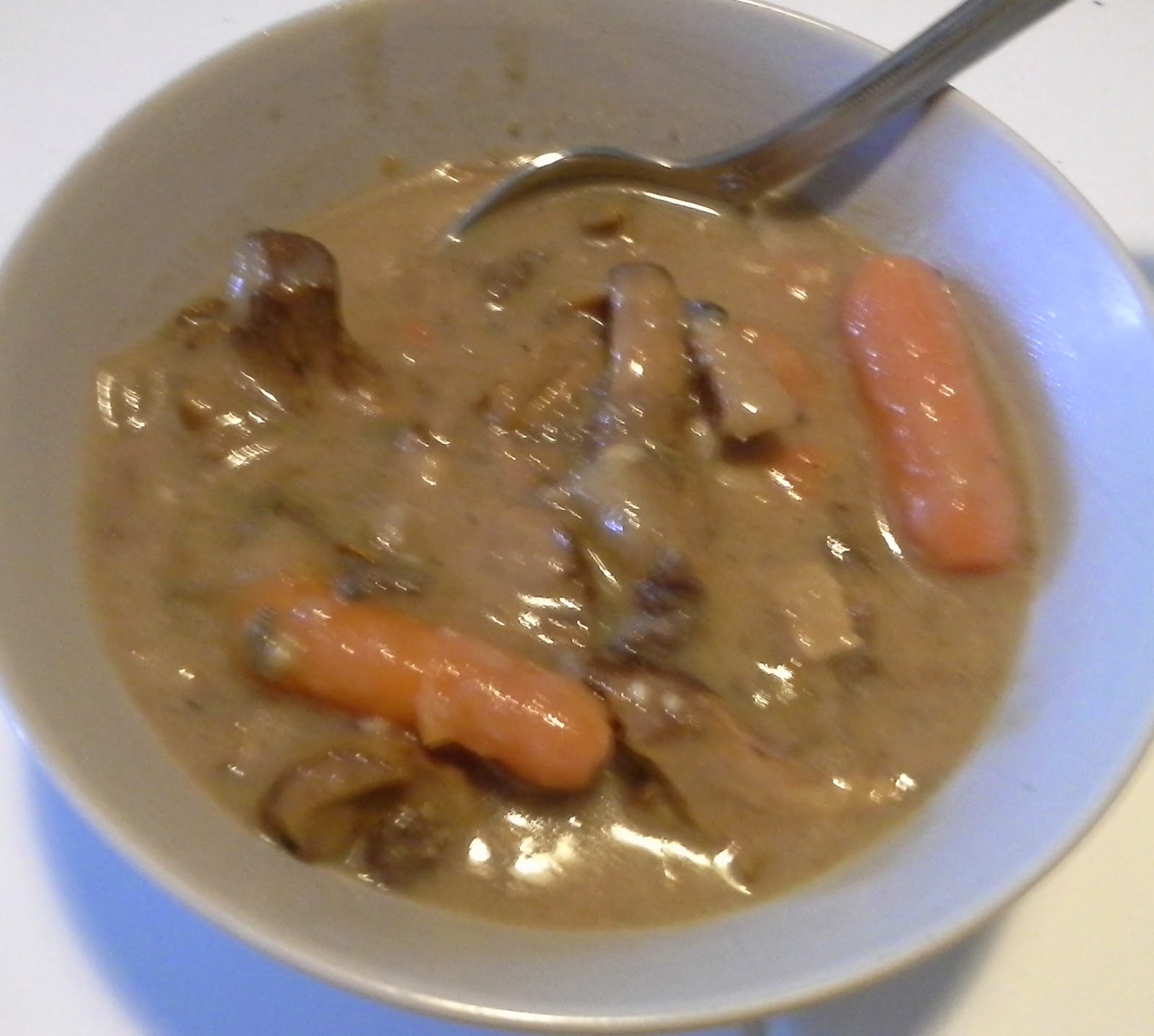 Oh, did I tell you that the meat he used in the stew was bear steak from a hunt of his this past bear season.  Sorry, I forgot to add that.  By the way, the recipe works with beef as well.


No Longer Wild, but Tamed Chanterelle: 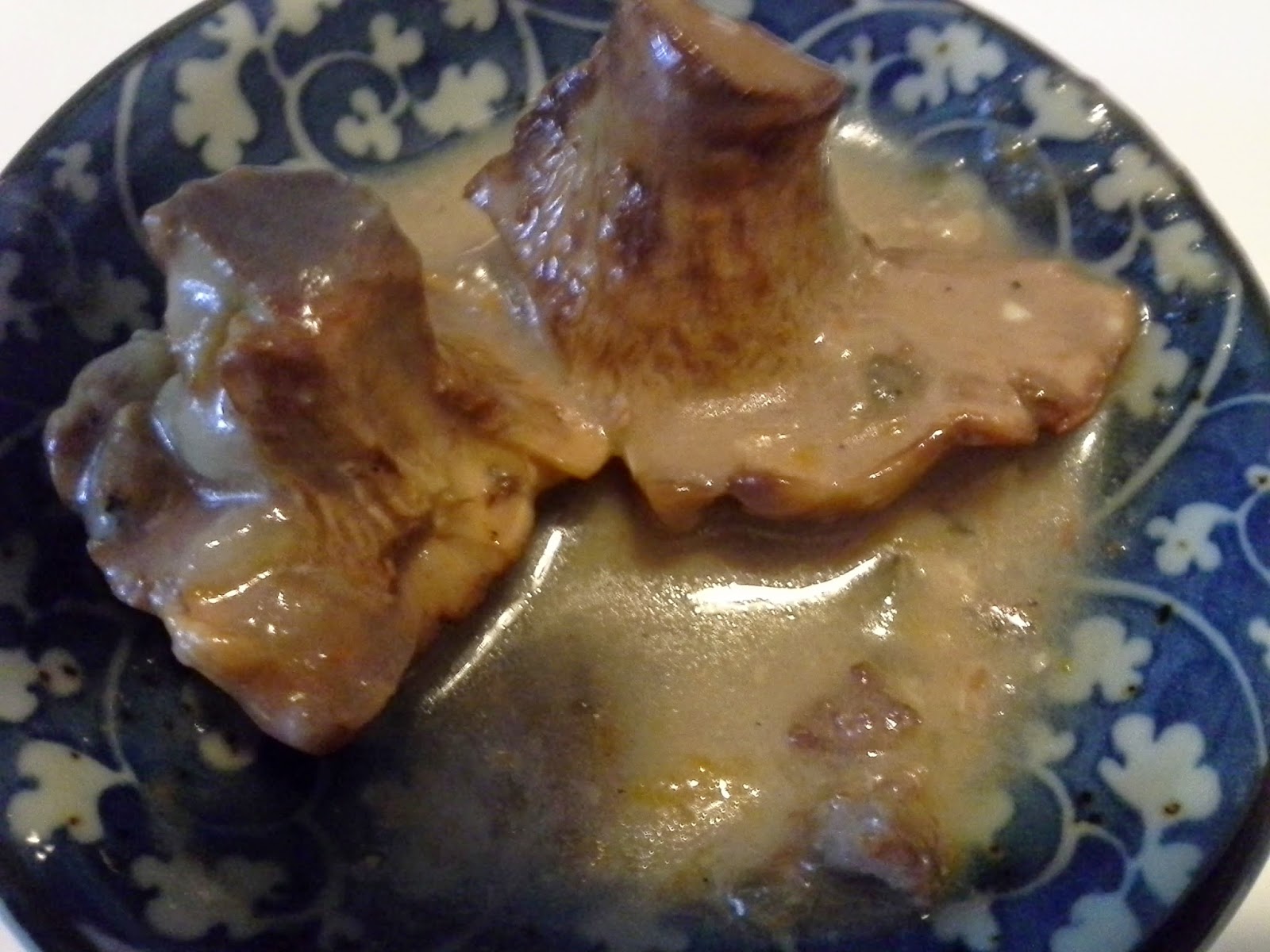 Look how scrumptious they are!  Now just sit down to the coffee table with a bowl of bear-mushroom stew to watch a movie.  How about The Beguiled?
Posted by Unknown at 5:41 PM