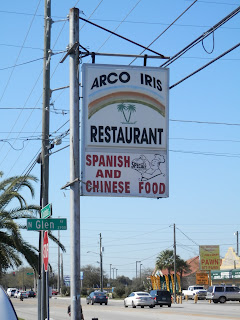 Arco-Iris restaurant is one of many places in Tampa where you can find great Cuban food for reasonable prices.  Years ago, they added Chinese cuisine to their repertoire and make some of the best fried rice that I have ever eaten.  Thanks goes to my Mother- and Father-in-law, Gloria and Papi for finding this place for me.

When dining at Arco-Iris, don't forget a Cuban sandwich to go -- pork, ham, and swiss on Cuban bread with butter and yellow mustard, finished in a sandwich press.  Warning: Don't let anyone, anywhere put mayonnaise on a Cuban sandwich.  If you have to have mayonnaise on your sandwich, then get a ham and swiss.  Cubans serve some of the best ham around.  These sandwiches make great road food or take-outs for eating later.  I often buy several to share with my Cuban in-laws.

You can find this place by taking the Del Mabre exit from I-75.  Go east, not west.  Drive to Columbus and turn right.  Arco-Iris is several blocks down that street on the right in a quaint square building.  Their booths are cosy, but because of the popularity of the restaurant, not always available.  If you see an open table, take it.

If you like rice dishes, Arco-Iris is the place for you.  This restaurant makes white rice, yellow rice, moro rice, fried rice, rice with black beans, rice with red beans, and I'm beginning to sound like Bubba from Forrest Gump.  Rice, though a side dish, is one of the main reasons I eat at Arco-Iris. 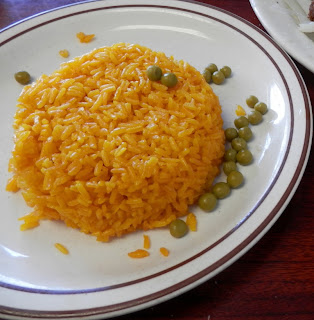 Yellow rice is white rice made with saffron and other spices.  It is often cooked with chicken, arroz con pollo, which by the way is one of their weekly specials.  I eat around the green peas. 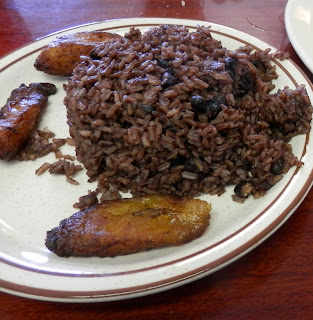 For this dish, black beans are stewed down, and then the liquid from the beans is added to the pot where the white rice is cooked.  This way the black bean sauce is infused into the flavor of the white rice.  Those scrumptious-looking brown things on the side are plantains. 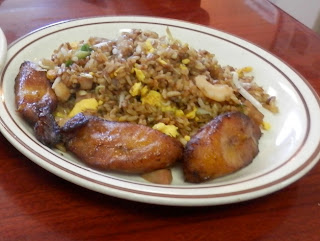 Though this place primarily serves Cuban food, I consider the fried rice the signature dish for Arco-Iris.  Generally, I grab several to-go servings when I eat there for my relatives in Gainesville.

My favorite entrees' include some great beef and pork dishes.  All served with fresh onions and two sides (rice of course).  Buttered Cuban bread is served prior to each meal and you can request refills as you eat.

In addition to beef and pork entrees', Arco-Iris has fish, chicken, and shrimp dishes which I like, as well as liver.  But you know, I don't eat the liver ... anywhere! 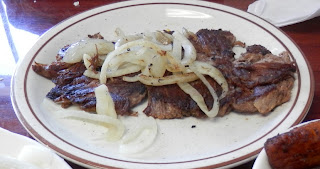 Many of you have probably had pulled pork and/or pulled chicken.  This is basically what the Cubans do to beef:  cook it as a roast first, pull the cooked meat into strips, then pan fry the shredded beef.  Twice cooked is always better. 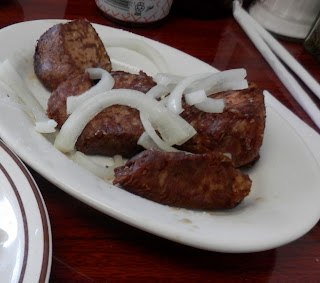 This is a must-have dish for me.  The deep fried pork chunks are served as either an entree' or an appetizer.  My wife's family uses a boston-butt when making this dish and my guess is that this restaurant does so as well.  My belief is that deep frying meats without breaking cooks much of the fat out of the meat without losing the flavor that the fat provides. 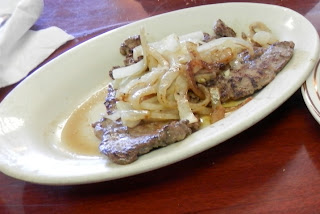 This dish is both a Cuban and an American favorite.  See the brownness to the onions.  Those have been sauteed with the steak.  Um-mm! 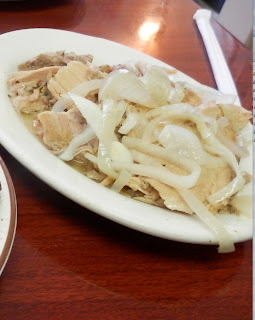 Pork roast here is marinated (probably a day in advance) and slow cooked until the roast is falling apart in the marinate.  My guess is that the roast is a trimmed boston butt.  This dish is served with fresh onions and goes great with Arroz Moro.

Here are two must-have sides.  I generally share the Yucca for an appetizer and order the plantain for a side.  None of my Cuban relatives want to share their plantains. 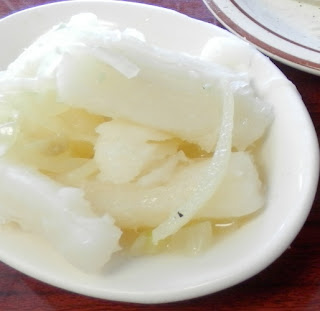 Yuca is the root of the yucca bush like you find in a neighbor's yard or at a nursery.  For the squeamish eater, suck it up.  You eat potatoes and carrots, and they come out of the ground.  This is a great dish!  As an appetizer, it is fried, though they will probably let you have yuca con mojo as an appetizer as well.  Yuca con mojo as a side dish is yucca soaked in this great Caribbean marinate: lime juice, onions, and garlic sauteed in oil.  At home, I use a similar sauce in my Cuban barbecued shrimp dish. 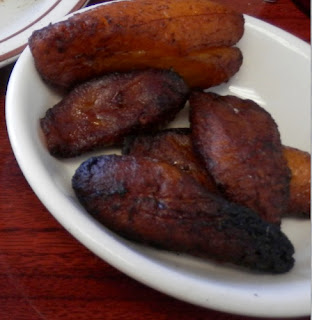 Plantains are a large, very large species of bananas which are cooked either green or ripe.  I had a grandson running through the house with a larger than usual plantain in his hand, shouting, "Nanna!  Nanna!"  My guess is that he thought that he had captured the mother of all bananas.

The sweet plantains are ripe ones that are they are covered in oil (room temperature) and pan fried when the oil is hot (but not too hot) to tenderize the plantains and to catalyze the releasing of the natural sugars in these bananas.  These plantains at Arco-Iris are particularly ripe and are sooo sweet.  See the black on the plantains in the picture ... that's the best part.  You can ask for this dish as an appetizer instead of a side, but then you'll have to share.  Generally, we get fried green plantains for an appetizer. 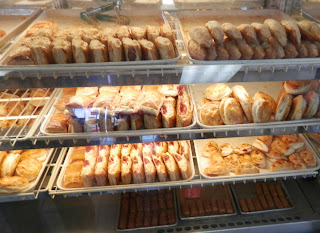 We always go next door to the Florida Bakery for takeouts to my in-laws in Gainesville, Florida.

On the bottom tray, there are deep fried ham croquets which make great finger food for the road.  The empanadas and the pastelitos, I don't recommend for road food unless you want to vacuum phyllo flakes from your car after.

This place sells fresh Cuban bread.  You can get Cuban sandwiches here also.

Note: Cuban bread is an old-fashioned European bread made with a water-flour base rather than milk.  Other than yeast, there are few additives in it.  This bread is great on day one and good on day two, but by day three it gets hard, but not stale.  Which means that it can be slow toasted to a golden brown and placed in a tin for snacking on later with butter (not margarine).  The Spanish term for this toasted bread is pan duro or hard bread.  I have never seen hard Cuban bread get moldy, and my guess is that is because the bread has no sugar or milk in it.
Posted by Unknown at 2:18 PM