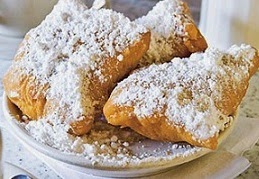 You don't have to be in the French Quarter to get good beignets.  In the Lakeside Mall at the corner of Veterans and Causeway Blvd. is a branch of Cafe Du Monde, the famous coffee and doughnut shop of New Orleans.  Here  you can get great beignets.   For more info, go to www.cafedumonde.com.

From time to time, I return to my roots in New Orleans and generally don't frequent any given restaurant enough to do a full-fledged posting on.   Here are a few lunch places as well as some breakfast places that I already posted.  If you are in the Big Easy for a few days and are not in the French Quarter, these are some of the places that I recommend: 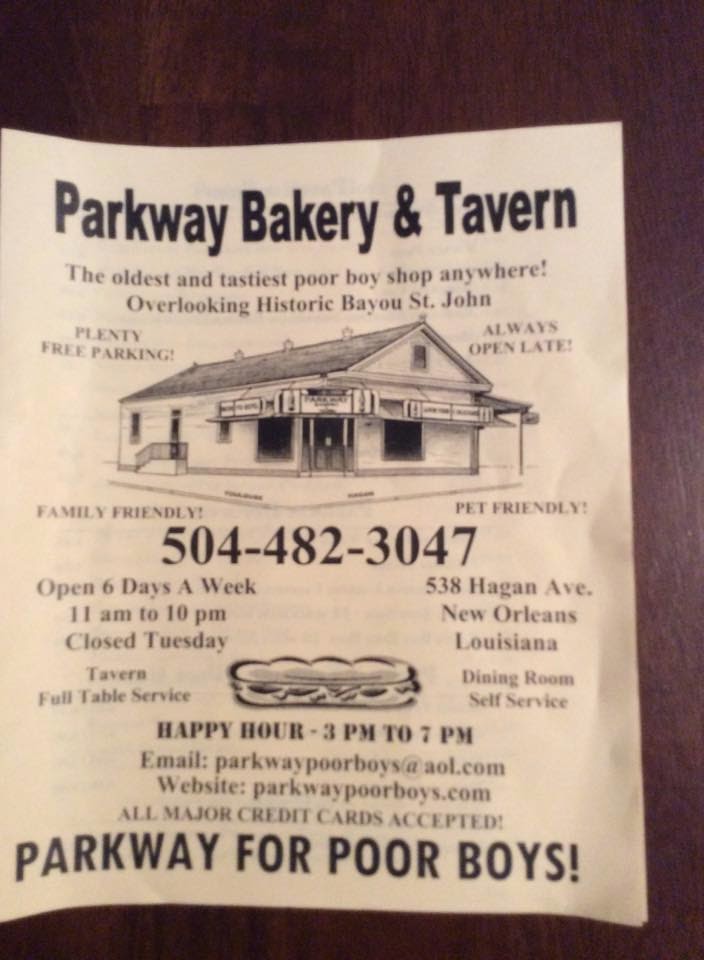 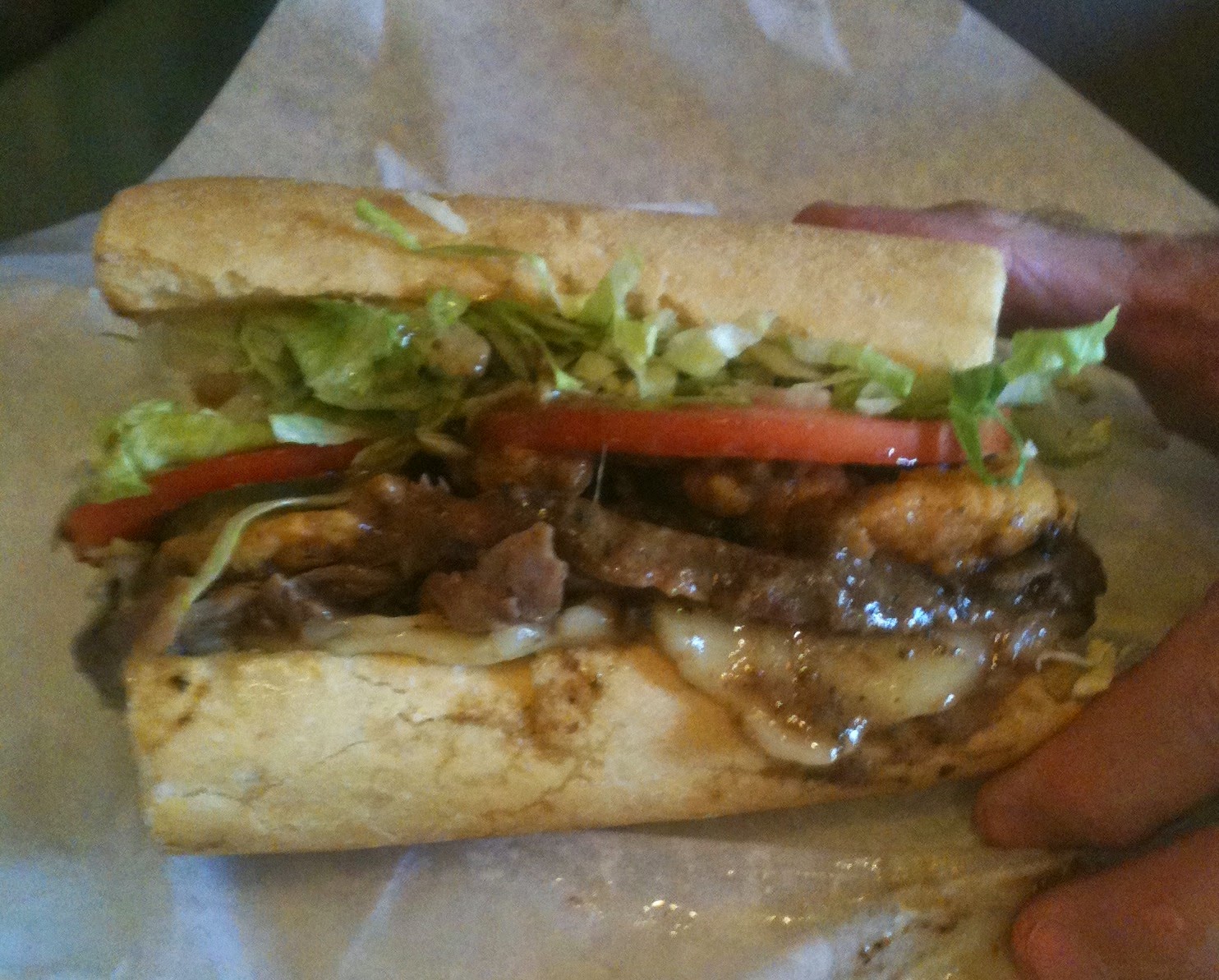 Above is a surf-n-turf po-boys from Parkway.  Normally I don't go for everything in the world on a sandwich, but I gave the surf-n-turf a chance.  It was great!  The surf-n-turf is a combination of fried shrimp and hot roast beef (with gravy).  The roast beef was tender enough to bite and the shrimp was popping fresh.  This is one of the best po-boys that I have ever ingested.  Thanks goes to my cousins Peter and Susan for taking me to this place.  For more info, go to www.parkwaypoorboys.com. 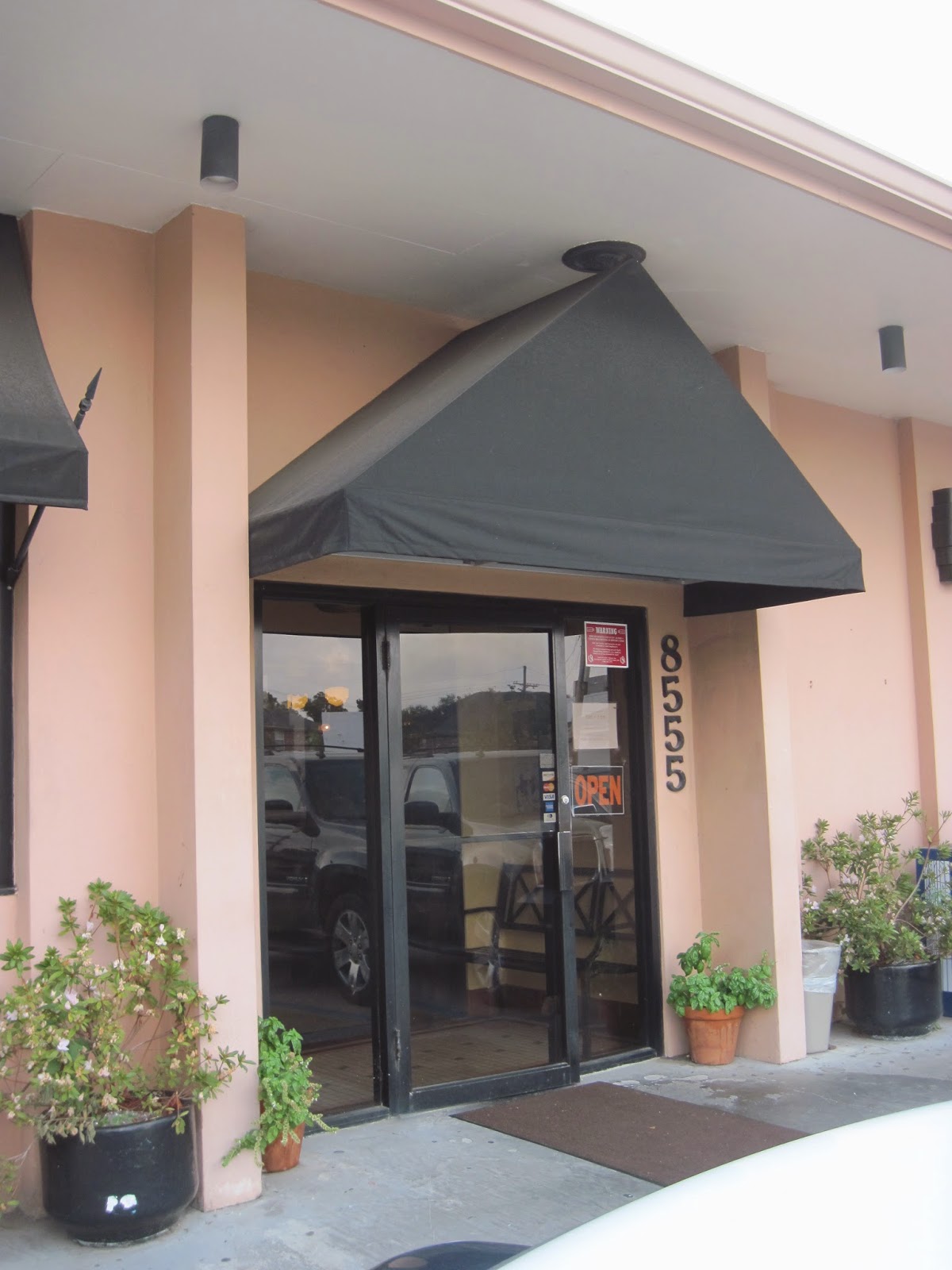 Russell's is located near the lakefront.  From I-10 or I-610, take West End Boulevard to Robert E. Lee Drive, and then it gets complicated if you're not a local.  Check your GPS to find out the rest of the way.  Russell's first opened in 1985 and transferred to the current owners four years later.  The place was resurrected after Katrina.  It offers breakfast as early at 7 a.m. and lunch as late as 3 p.m. but it doesn't matter when you come; I have seen red beans and rice served for breakfast and eggs served for lunch.  Thanks goes to my Mom, now in the afterlife, for finding this place for me.  It was a regular stop for both of us on my visits to the Big Easy.  For more info, go to russellsmarinagrill.net. 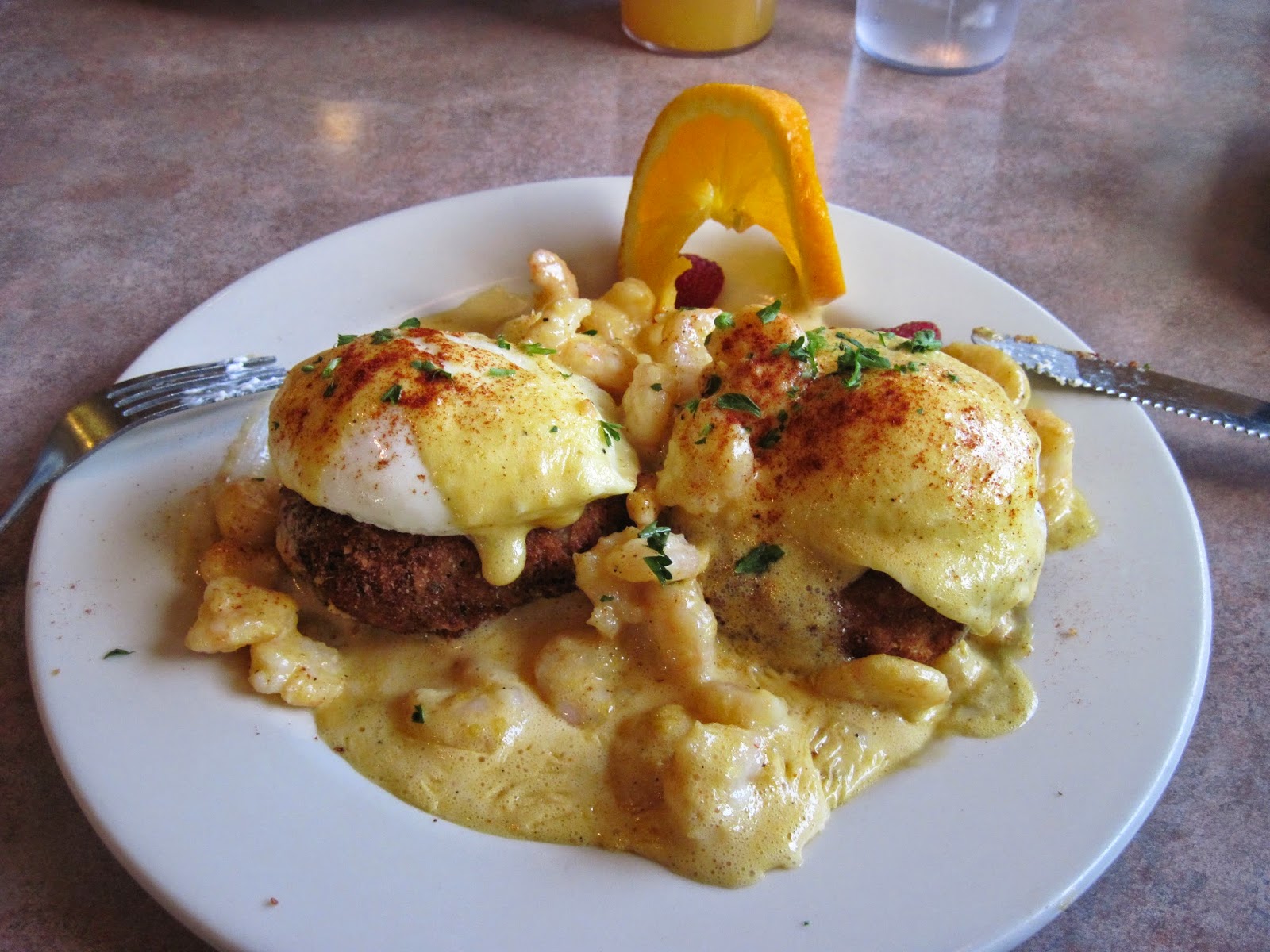 Here is a New Orleans version of eggs benedict: Eggs 9th, poached eggs over crab cakes topped with a shrimp hollandaise sauce.  Just cut into this scrumptious breakfast and let the egg yolk run over everything.  Side dish includes fruit cup or grits or whatever.  I always get the grits and load it into the leftover hollandaise sauce when I'm done.  Price is a reasonable $12.99.

The Cabin of Burnside: 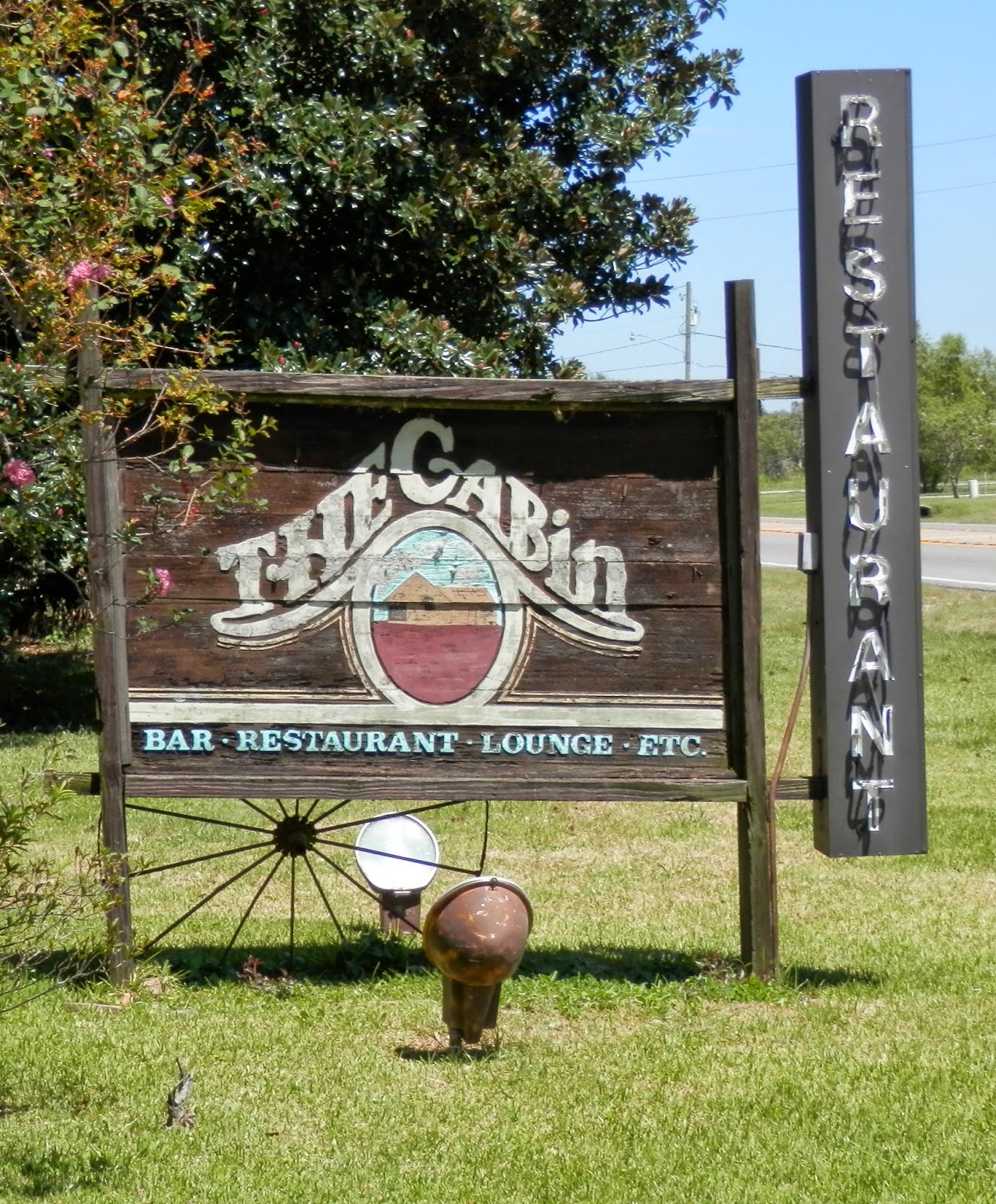 Just about 30-45 minutes north of New Orleans, this is a place worth the drive.  Go west on I-10 to the first Gonzales exit and turn right on Brittany Road.  Take a nice scenic drive toward the river, and at the crossroads of LA-22, you'll be there.  They have great fried seafood as well as other Louisiana dishes.  Go to http://www.thecabinrestaurant.com for alternate directions and their menu. 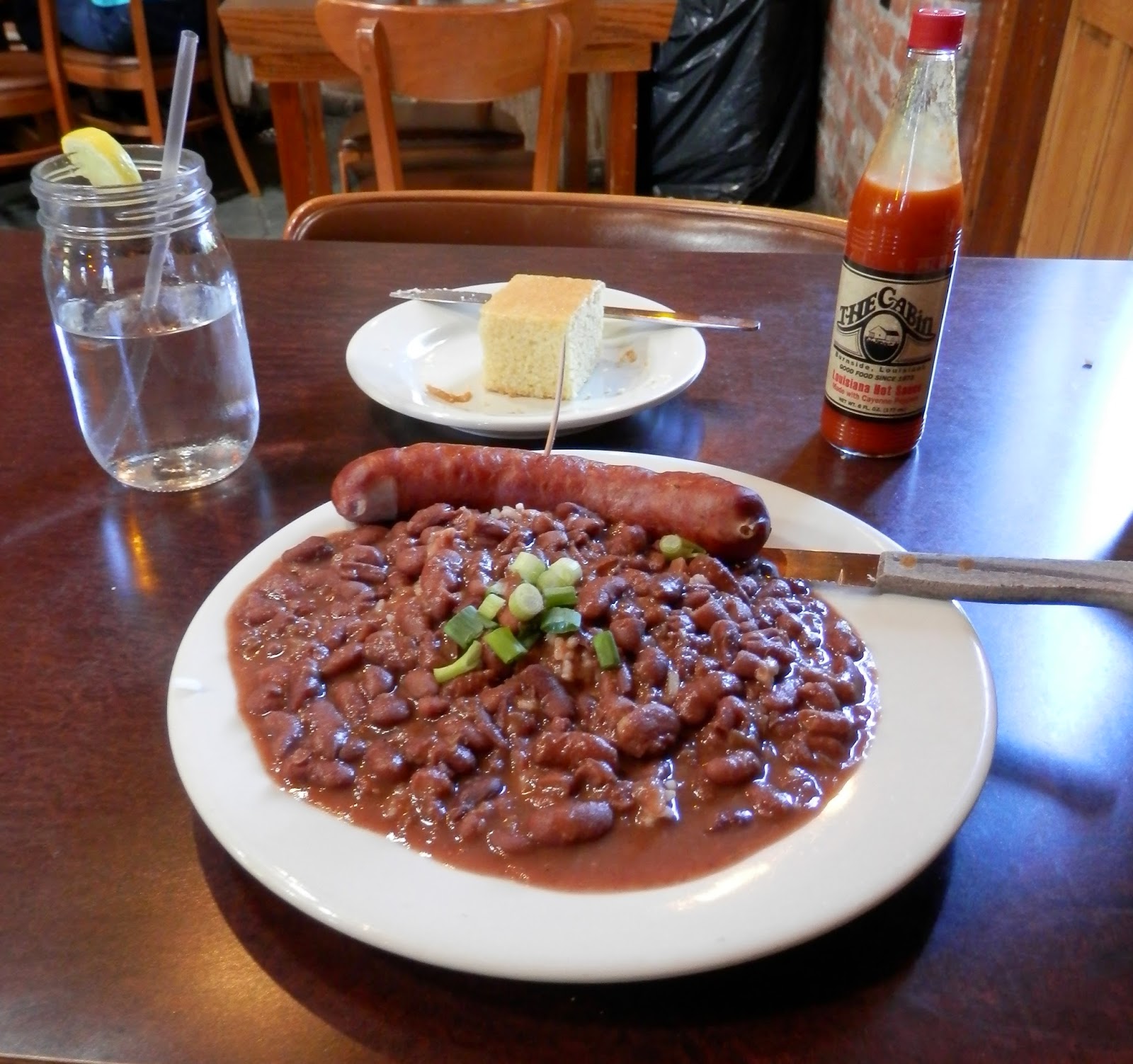 Generally, if I have been out of the area for awhile, I have to stop by the Cabin for their famous red beans and rice.  Be sure and add some of the Cabin's own hot sauce. 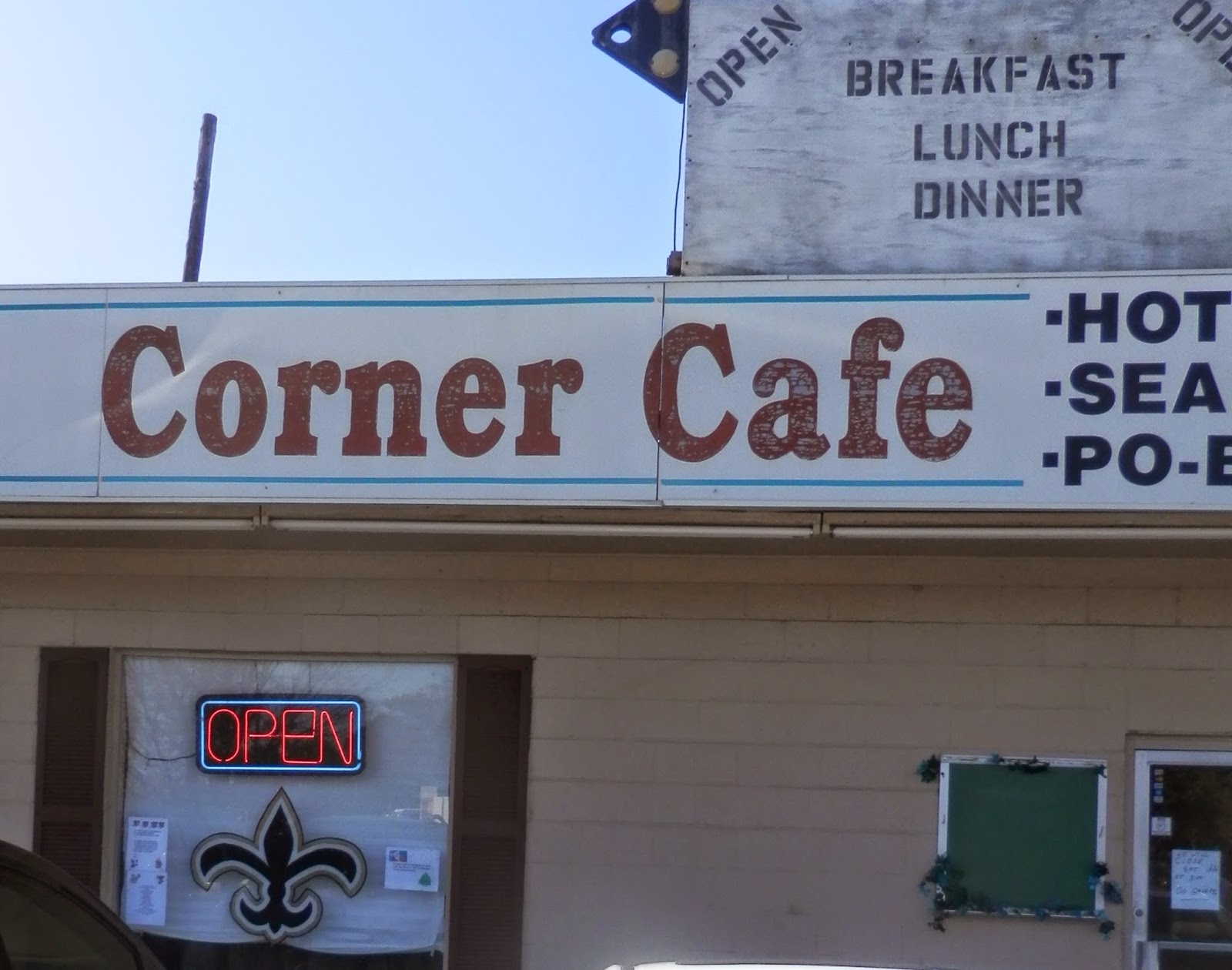 The Corner Cafe is hiding on Green Acres Road just a block off of Veterans Hwy in Metairie, Louisiana, a large unincorporated area just west of New Orleans and south of Lake Pontchartrain.  Thanks goes again to my cousin Peter for taking me to this place. 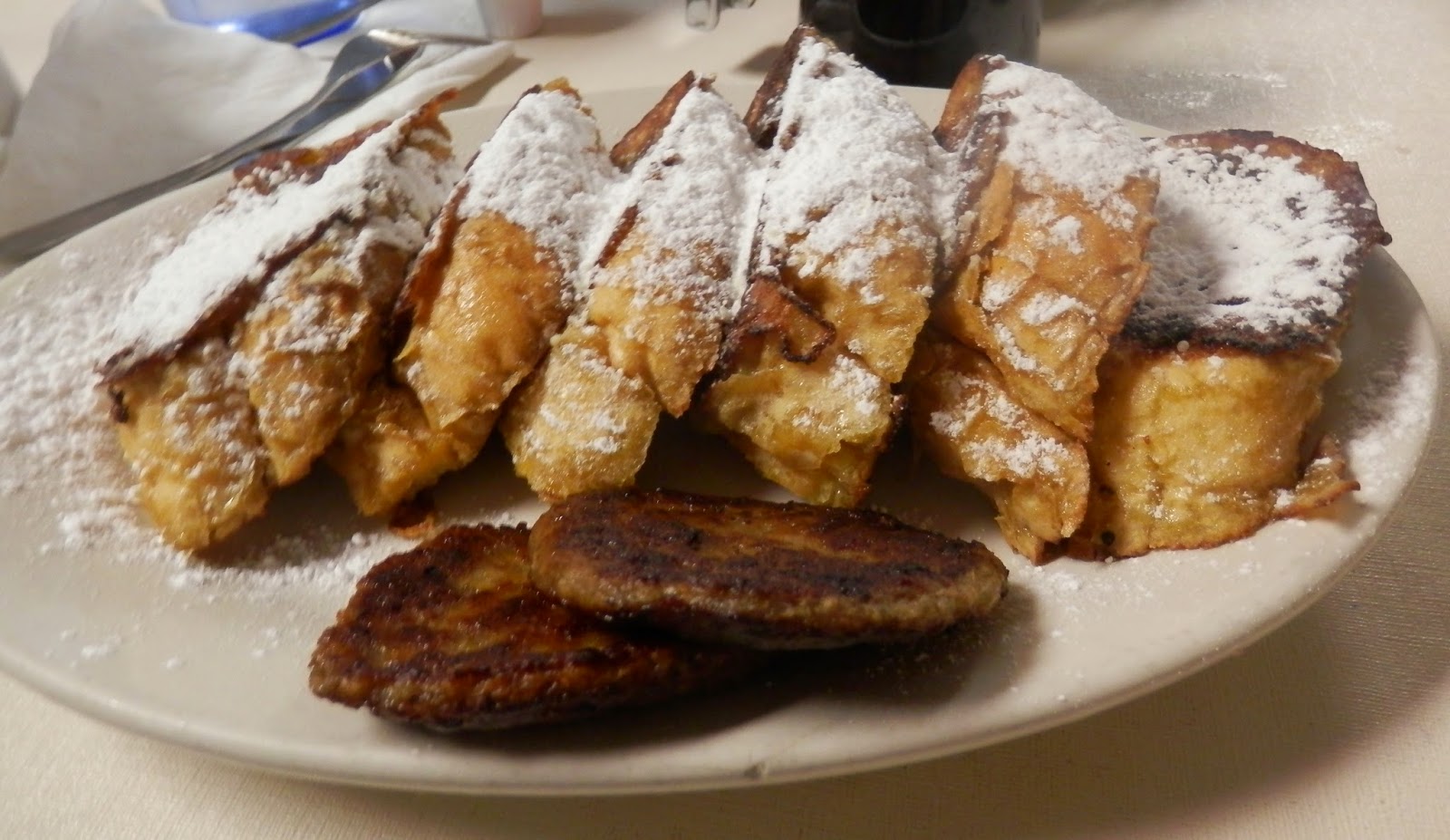 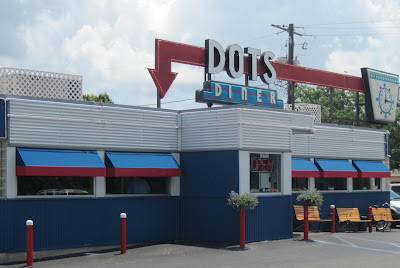 Dot's is a chain of six Jefferson Parish restaurants, just outside of New Orleans.  Mom-n-pop is their style and remains that way no matter how many locations they have.  Note: parish means county in Louisiana.

At least three of the outlets are located on Jefferson Hwy which runs parallel to the winding Mississippi River.  If you exit I-10 on Causeway Blvd. and head south you will reach Jefferson Hwy.  Go left or right and you'll find a Dot's.  For alternate directions and a menu, go to www.dotsdiner.com.

My favorite location is on Jefferson Highway next to the Mississippi River bridge.  This is the dive-est looking one from the outside, but the food is great.  This location has in my opinion the best grits.  The grits are thick enough to pass the pepper test, but are so creamy that it seems as if they make the 30-minute grits there and not the five minute ones that you find just about everywhere else in the New Orleans area. 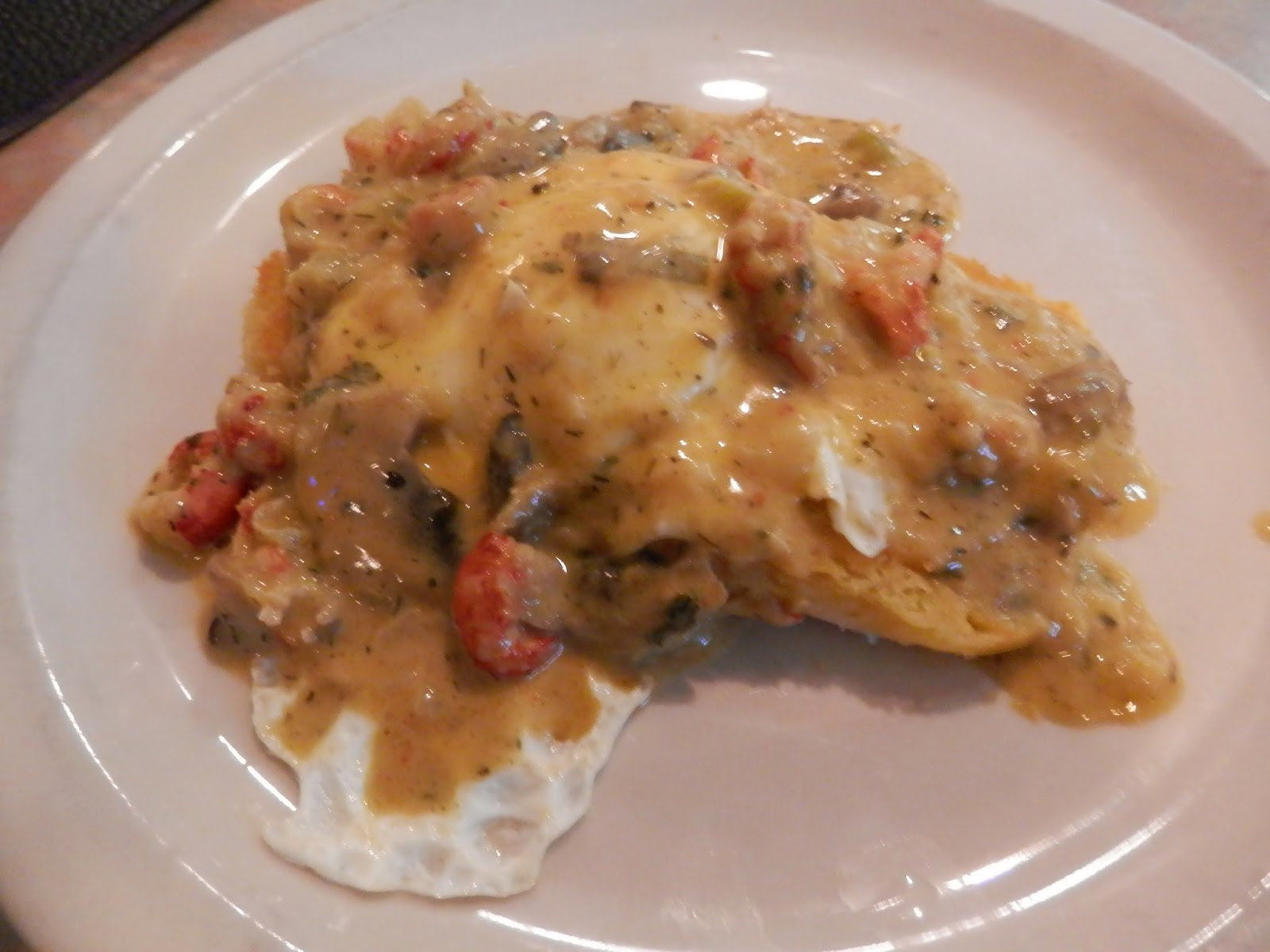 Here it is and for less than $5!  Grilled biscuit topped with swiss cheese and an over-easy egg and on top of that Dot's own Crawfish Julie sauce.  This is their signature dish in my opinion.  Order two!

Thanks goes to my friend Eric Bouler for hooking me up with this place.  I have eaten here several times before starting my blog, and every po-boy was great.  Unfortunately, I have only eaten here once since the blog started up.  Above is the chalk-board menu. 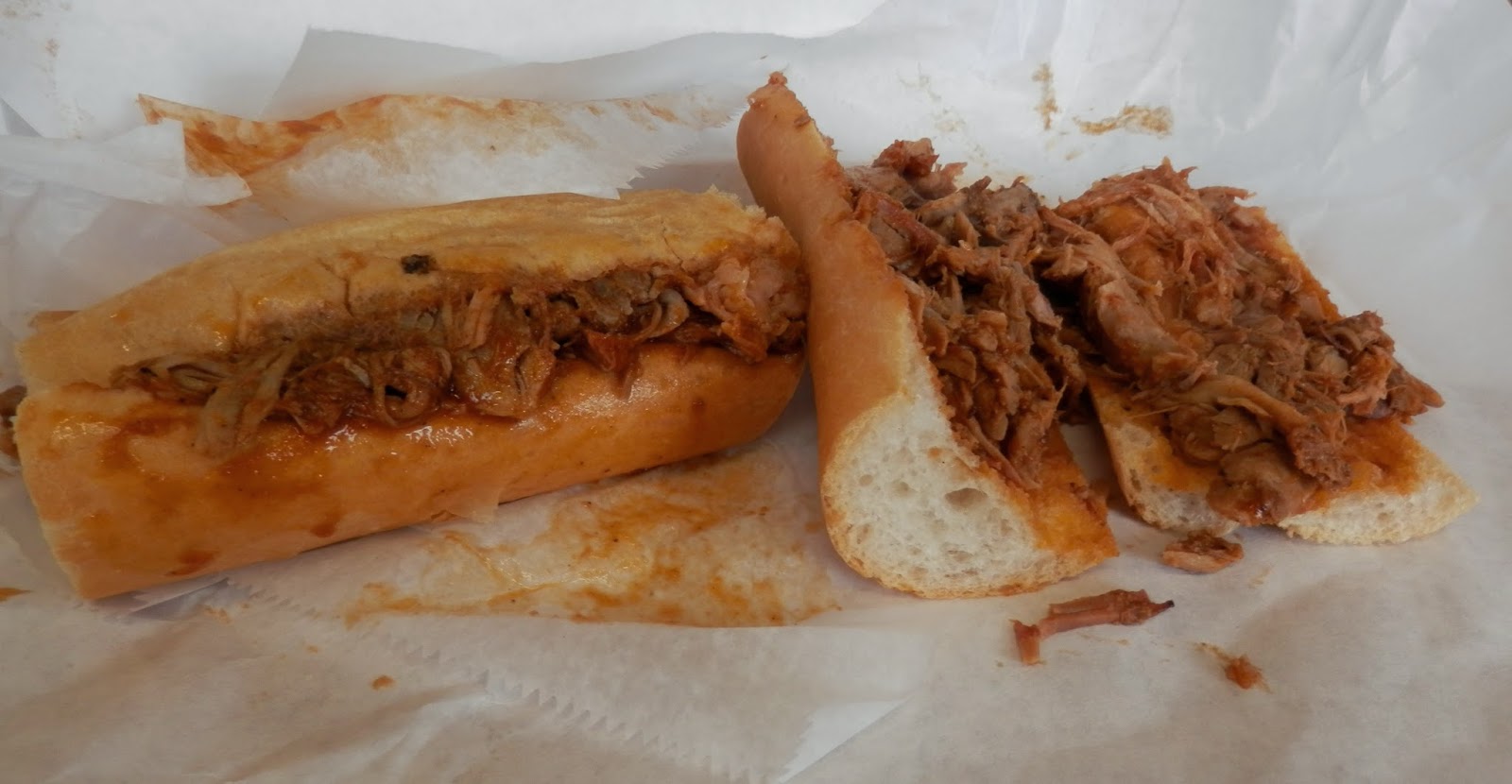 This is pork cooked down in some sort of bar-b-q type of sauce and is quite delicious.  Note: if I take you to a po-boy restaurant in the New Orleans area, the place will have real water-base French bread, and this place has it.

French Bread and the Land of Po-Boys: 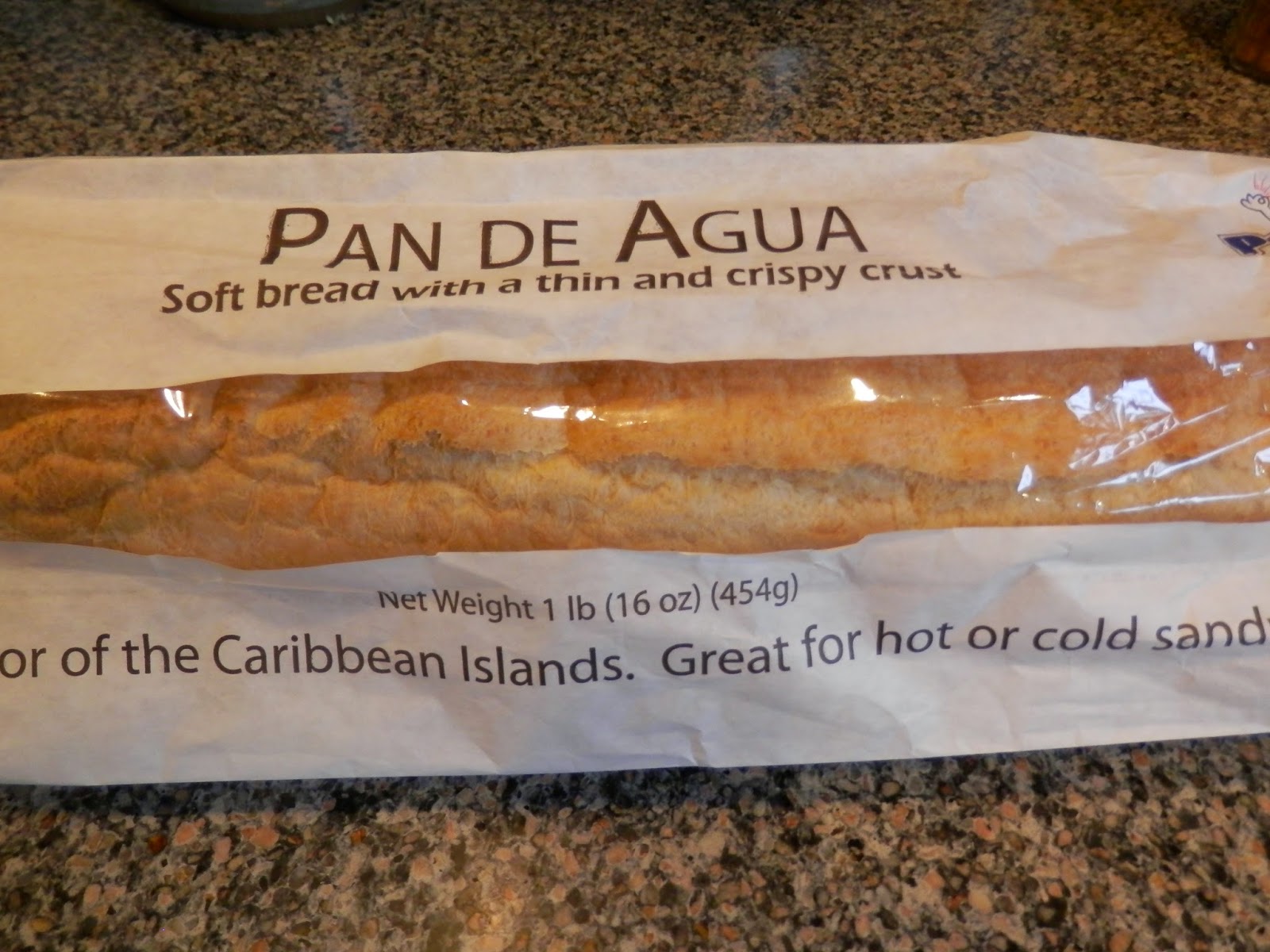 If you are in a grocery and the place is selling "French" bread, look at the ingredients.  If it lists milk, then don't buy it.  There is no milk and little or no sugar in real French bread.  Water-based bread has about a two-day shelf life before becoming hard, not stale.  Hard bread can be sliced and toasted in the oven for longer-term storage.  Without milk or sugar, the bread will not turn blue.

I could do several years of postings on the great mom-n-pop po-boy places in the Greater New Orleans Area.  Above I have mentioned only two.  Guess I need to get back to the Big Easy.